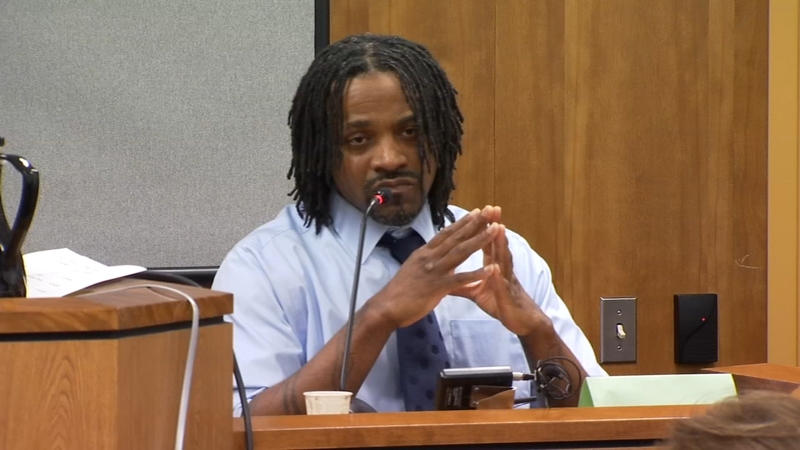 FRESNO, Calif. (KFSN) -- The coronavirus hasn't stopped a capital murder trial in Fresno County, but the man on trial for four murders did mention it when he testified Tuesday.

The defendant was not quite as quick to confess in court as he was when police arrested him after he killed the last of his four victims, but after prosecutor Kelly Smith pressed, he admitted to killing motel security guard Carl Williams on purpose.

"It happened," Kori Muhammad admitted. "I killed him, yes. He's dead, so it had to happen."

"What I'm asking you is you're deciding to shoot a person six times," prosecutor Kelly Smith responded. "You intend to put that person down. You intend to kill him, don't you?"

The 41-year-old wanted to take the witness stand and gave a black power sign as he took his oath.

His defense attorney only asked him about his religious beliefs in a mixture of Nation of Islam and voodoo he calls Kali Sufi, and the tools of his faith, like amulets and necklaces.

"They're basically physical manifestations of my divine powers," the defendant said.

His defense is that he was insane at the time he killed Williams and then days later killed Zackary Randalls, Mark Gassett, and David Jackson.

Investigators say his religion of racism played a bigger role than any mental health issues.

The defendant eventually admitted to killing all four victims and intending to kill a couple other white men, and he brought the current health crisis into his explanation.

"You shot at all three of them together, didn't you?" Smith said of the victims gathered near a bus stop on Fulton.

"Just like the coronavirus is killing people presently, I wanted to kill them, yes," Muhammad said.

Jurors could decide the guilt phase of the trial before the end of the week.