Live-action Disney movies: A timeline of recent films from 'Cinderella' to 'Lion King' and beyond 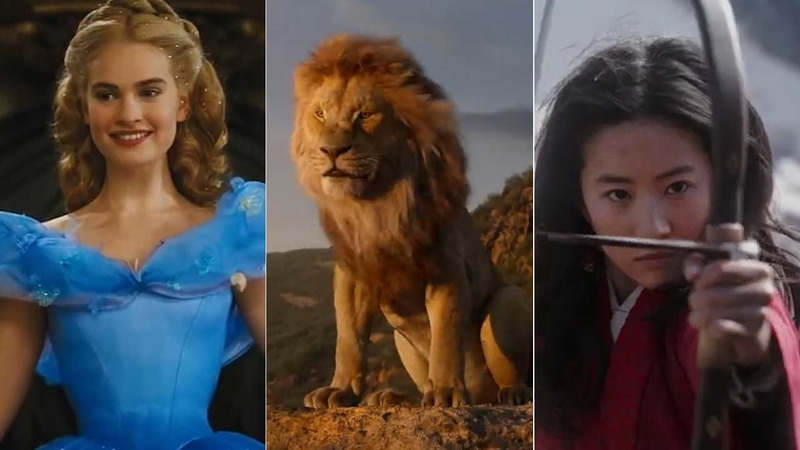 A timeline of live-action Disney movies

Every year, Disney gets better and better at revisiting its classic films in a way that makes even its most fantastical tales look real using a combination of live-action and CGI.

"The Lion King," a recreation of the beloved 1994 animated classic, just hit theaters. It's the third Disney film this year that brings an old animated story to life in a new way after "Aladdin" in May and "Dumbo" in March.

Where does the new "The Lion King" fall in the grand scheme of this trend? Take a look at some of the significant releases -- both recent films and planned projects -- in the timeline below.


"Maleficent" is a whole new take on 1959's "Sleeping Beauty," and it captivated audiences so much that it is still among the top 100 releases of all time, according to Box Office Mojo. While it wasn't the first live-action fantasy Disney movie inspired by a classic animated film, it seems to be the start of a trend: Over the past five years, Disney has had at least one major release that fits that bill every year.

On the heels of a new "Sleeping Beauty" movie, Disney turned to another classic princess tale: "Cinderella." The 2015 film brought the iconic characters and magic to life like never before.


2016's biggest live-action Disney remake was "The Jungle Book," which brought in $966 million worldwide. The live-action version of the 1967 animated film was so impressive that it was nominated for Best Visual Effects at the Oscars. It was directed by Jon Favreau, who also directed the new take on "The Lion King."

"Alice Through the Looking Glass"
Release: 2016


The sequel to "Alice Through the Looking Glass" came out six years after "Alice in Wonderland," a live-action reimagining of the classic animated movie. The 2010 film is still among the most popular of Disney's live-action films, bringing in more than $1 billion worldwide. The 2016 sequel brought Wonderland to life once again.


In 2017, Disney found a fresh new way to tell the tale as old as time, and as of this writing, it's the biggest blockbuster on this list. The Emma Watson film brought in $1.2 billion worldwide and was nominated in two categories at the Oscars. It also featured new music by Alan Menken and Tim Rice, both known for writing beloved songs for animated Disney musicals.


In 2018, Disney returned to the Hundred Acre Woods, this time in live-action. The newest film about the stuffed bear and his friends, which followed the story of Christopher Robin as a grown-up, out-performed the 2011 animated movie "Winnie the Pooh" at the box office. Like "The Jungle Book," "Christopher Robin" impressed for the creative way it brought the animated story to life and earned an Oscar nomination for Best Visual Effects.


Nearly eight decades after the original animated film, the story of a flying baby elephant was brought to the big screen with live-action. The new "Dumbo" boasts an all-star casts including Danny DeVito, Michael Keaton and Colin Farrell.


The new take on "Aladdin" followed the lead of "Beauty and the Beast" by including new music that was incorporated into the story. Despite having big shoes to fill, this year's take on "Aladdin" was a hit. The film earned an impressive 94% audience score on Rotten Tomatoes, with many praising Will Smith's performance as the genie.


Talk about an all-star cast: Donald Glover, James Earl Jones, Chiwetel Ejiofor, Keegan-Michael Key and Seth Rogen are in it, just to name a few. Oh, and not to mention -- Beyonce. The highly anticipated remake just hit theaters and is expected to be one of the biggest blockbusters of 2019.


"The Lion King" may be the last Disney remake of 2019, but we'll get another live-action tale centered around the "Sleeping Beauty" characters before the year is out. Elle Fanning is back as Aurora and Angelina Jolie will return as Maleficent in the "Maleficent" sequel, out this October.


Fans of "Mulan" will have to wait until next year to see the live-action remake, but a teaser trailer is already here.

There hasn't been an official release date announced yet for the upcoming live-action "The Little Mermaid," but Disney's already announced that 19-year-old R&B singer Halle Bailey will play Ariel.