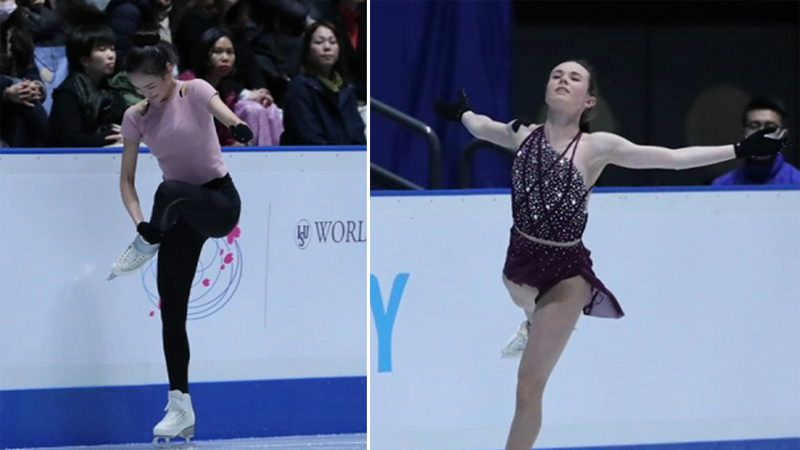 A figure skater is accused of going after her rival by allegedly kicking her with her skates, a story that sounds similar to an incident between two Olympic skaters that riveted the world years ago.

Collisions happen all the time, but in this case, the story may be spinning out of control.

In a world where performers exude grace and serenity, a clash between rival skaters at a world competition is happening now in Japan.

American Mariah Bell is accused by representatives of South Korea's Lim Eun-soo of bullying Lim, deliberately kicking her during a warmup. Pictures show the grimace on her face.

Mirai Nagasu is a fellow member of Team USA. Eyewitness News reached out to her by Skype as she watched the incident erupt on social media.

"These things happen. The attention it is getting is huge, but at the same time I think, to me, it just looks like an accident," Nagasu said.

Figure skating was scandalized when Olympic competitor Nancy Kerrigan was clubbed on the knees. A skating panel concluded that her rival, Tonya Harding, had prior knowledge of the attack.

On Instagram, an accuser wrote to Bell, "Sounds like you are the next Tonya Harding. Don't try and win by cheating..."

Champion Skater Adam Rippon pointed out on Twitter that Bell and Lim train together in Lakewood.

"I have been to the rink multiple times and NO ONE has been bullying anyone... What happened in the warm up was an accident...," he said on Twitter.

The International Skating Union seeking to end the speculation said:

"Based on the evidence at hand at this point in time, which includes a video, there is no evidence that Ms. Bell intended any harm to Ms. Lim."

"It looks like Mariah is skating forward that she goes by that clips Eun Soo..so it looks like an accident," Nagasu added.

The incident happened during a critical period of preparation. Each skater is given one chance to practice with her music and focus, a reason Nagasu suggests is why Bell did not stop and apologize to Lim.

"When your program is playing, you are in a different world," she said.