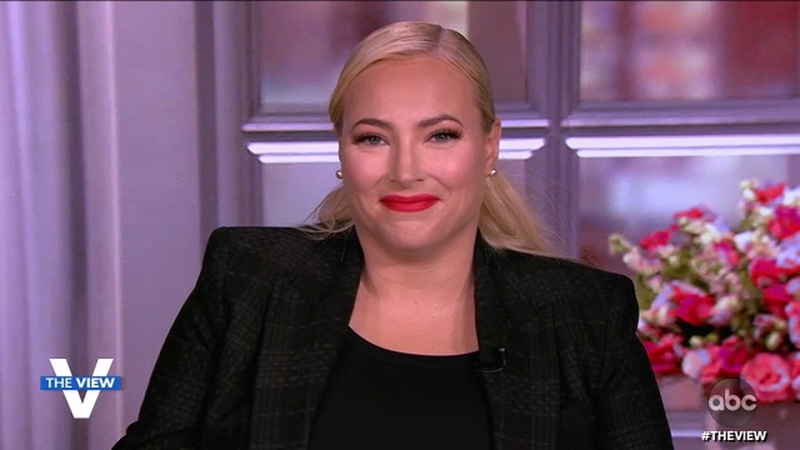 NEW YORK -- After four seasons on "The View," Meghan McCain announced Thursday that she's leaving at the end of July.

"It's such a privilege to be on the show. It's such an iconic show. It's so iconic to be in this chair that (Elisabeth Hasselbeck) made so great," McCain said at the top of her first show on Oct. 9, 2017. "I watched Elisabeth in college, and to be the conservative on this show is something I take very seriously, and I'm excited to bring a different perspective to the show."

Upon her return, McCain reflected on the time she had to recover from her emergency cesarean delivery and postpartum preeclampsia. She soon called for mandatory paid maternity leave.

RELATED: Meghan McCain opens up about miscarriage in emotional op-ed: 'I loved my baby, and I always will'

"As I thought about it, the more angry I got that there weren't women in the rest of America that had the same kind of luxury that I had working here at 'The View,'" she said.

"We are leaving women in this country without (that) capacity and ability -- unless you have an employer that allows you to take care of your child -- to heal physically, which is something that needs to happen," she added.

McCain, who was born and raised in Phoenix, Arizona, was propelled into the national spotlight at an early age as the daughter of Sen. John McCain. She is a respected Republican voice and is passionate about a wide range of topics, from women's and social issues to marriage equality.

Before joining her father's 2008 presidential campaign, McCain graduated from Columbia University with a degree in art history and ambitions to pursue a career in music journalism. She completed internships at Newsweek and "Saturday Night Live."

In a statement, ABC News said, "For the past four years, Meghan McCain has brought her fierce determination and vast political knowledge and experience to The View. She recently came to us with her decision to depart the show at the end of this season, a difficult choice that she made for her and her family that we respect and understand. We wish the best for Meghan as she plans her next chapter, and thank her for the passion and unique voice that she shared with us and our viewers each day."
Report a correction or typo
Related topics:
arts & entertainmentnew yorkrepublicansthe viewtalk showotrcjohn mccain
Copyright © 2021 ABC News Internet Ventures.
OTRC
Elon Musk, Grimes end romantic relationship after 3 years
Matt Amodio passes $1 million mark on 'Jeopardy!'
'The View' COVID chaos possibly sparked by false-positive test results
What to watch this October: new shows, Halloween programming
TOP STORIES
15-year-old boy hospitalized after shooting in central Fresno
Officials investigate after Amtrak crash involving train from Chicago
Air purifiers could protect you from Valley's pollution, doctor says
Fresno County residents can now get the flu shot at drive-thru clinics
3 people dead after Amtrak train derails in Montana
Hot air balloons take to skies as Clovis Fest kicks off
Most Valley athletic events continue Friday despite poor air quality
Show More
Man shot and killed in southeast Fresno, police say
Man attempts to storm cockpit, strangles attendant on JetBlue flight
$30K in rewards offered for Brian Laundrie's whereabouts
8 arrested on hazing charges in VCU freshman's alcohol poisoning death
Matt Amodio passes $1 million mark on 'Jeopardy!'
More TOP STORIES News