Michelle picks her final four men on this week's 'The Bachelorette' 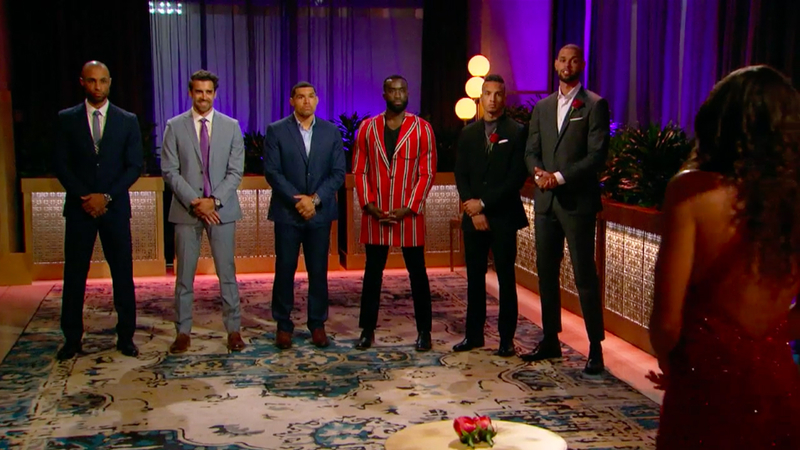 Michelle picks her final four on 'The Bachelorette'

NEW YORK -- We're down to our elite eight on "The Bachelorette." Michelle will cut this group down by half this episode. That means, if a man gets a rose, he's headed for a hometown date.

Tonight at 8/7c on ABC, Michelle's students are asking the hard questions on #TheBachelorette. 🤣 Stream on Hulu. pic.twitter.com/bsKAVY7j2Q

Four of Michelle's students met up with her and brought her the cutest little letters and pictures. They all just want the best for her. She told the kids that they would help her make important decisions. They told the men that they would be planning all of their dates this week. "Be kind to your wife, be nice, and be patient," Luke, Michelle's student said. One of the girls, Kelsey, liked Nayte because he was tall and he would be nice for her to play basketball with. It was hilarious! She did not like Martin; she found him to be too showy and said he wears too much cologne. Ahmed liked Rodney because he admitted to shaving his nipples. Colton did his best to have fun with the kids by building a living room fort. Luke said it was the best fort he'd ever seen. In the end, the kids chose Colton!

Clayton's One-on-One Date
Michelle was happily surprised when she saw Clayton walk out as the winner for the one-on-one date. They got into a limo, complete with a pizza, candy, and drinks. Then, they arrived at the Bell Museum of Natural History and because it was after hours, they had the whole place to themselves. They shared a magical romantic moment inside the planetarium where they shared a passionate kiss.

At dinner, Clayton told Michelle that he hasn't felt some of the feelings he felt that day in a long time. He said he spent a lot of time trying to impress people that he lost focus on what really matters. He said he wants a future with someone and kids. Michelle talked about how she'd rather be alone than in a relationship with someone who didn't see her and made her feel alone. Despite their great conversation, Michelle was feeling that something was missing in their relationship. She sadly picked up the rose and told Clayton that he checked every box of what she's looking for but she's not ready to meet his family yet and she's not able to get there with him in time. Michelle told him that she had to follow her heart. She set the rose back down and he told her he was grateful for the opportunity and to meet her and that he was sorry he couldn't be the one for her. "You are enough," Michelle told him.

The next day, the kids said goodbye to Clayton and gave him some little notes. They said that they were sad Michelle didn't pick him and asked to come to his future wedding someday. Kelsey's letter brought him to tears, telling him that he'll be a good husband one day, fall in love, have lots of kids, and be a great dad. AW! It's literally the sweetest thing! I'm crying over here! Clayton said he hadn't cried in years but, "It just shows me I want kids one day...I want a family." He wants to find love so badly, have a family, and start that chapter of his life. "I'll do whatever it takes to get that. Whatever it takes," he said.

Group Date
The date card read, "Rick, Rodney, Nayte, Joe, Martin, and Olu, Love is messy." That meant that Brandon was getting the other one-on-one date. The kids set up the group date on a farm! They had to milk cows. Rodney was so funny, but did a great job. Rick was a natural, but Joe "knows how to handle teats," Michelle said. Martin seemed to struggle on the farm. Then they all got to bottle-feed some baby cows! It was so cute! After that, they had to churn some butter. Rodney seemed to have the best butter-making technique, but even in that event, Joe had a ton of butter! Who knew he was so great on the farm? The men then switched gears to shoveling manure. Nayte hurt his back and used that excuse to talk to Michelle. Rodney wasn't having it and wheeled his wheelbarrow over to Michelle, did their secret handshake and even gave her a little kiss.

In the evening, Michelle noted that this was the last group date of the season! Wow! This group date rose comes with the invitation to go to hometowns so it's a big deal. Nayte revealed that he's never introduced anyone to his father before yet it would be so easy for him to introduce her. "I'm definitely falling for you," Nayte said. Michelle said that her heart was going a mile a minute! "I feel very strongly about you!" she said. I'm tumbling down a hill, so fast, falling for you, Michelle told Nayte. Wow!
Michelle complimented Joe on how nurturing he was with the animals and Joe told her that his grandparents owned a dairy farm! No wonder he was so good at everything! Rick told Michelle that he has no doubts about her, and Michelle told him that she likes who he is. They seem to have a great connection too.

Rodney talked about the importance of hometowns and told her that he really wants her to know why he is the way he is by meeting his family. He went in for the kiss and it's going to be a tough decision for Michelle!

Martin said that their conversation wasn't flowing and he thinks that Michelle hasn't been paying attention. Yikes, he's turning it around and saying he questions what he stands for. He even went as far as to call her immature. Olu was getting very bothered by the things that Martin was saying about Michelle. During his time with Michelle, Martin didn't criticize her at all and in fact, was very complimentary. Olu however, shared his concerns with Michelle. He didn't want to play the right reasons police, but he felt it was just too much and that Martin needs to go.

Michelle found Olu to be very trustworthy and she appreciated what he told her.

Michelle confronted Martin about what he had said and added that it absolutely wasn't true. He said there's a difference between having insecurities and being insecure. Martin tried to twist what he said around, but let the record show, he did say it was immature. Michelle told him that he has cut her off every time she speaks talking. "You haven't been honest, you have not listened to why I'm hurting," Michelle said. She said that she didn't trust him and that she had to walk him out. "A woman like that does not deserve my time," he said. Bye, Martin.
Michelle told the guys that she sent Martin home and then offered the date rose to Nayte! Joe, Rick, Olu, and Rodney were crushed!

Brandon's One-on-One Date
Michelle picked Brandon up and they went to one of her favorite ice cream spots. It looked like Michelle had mint chip and Brandon had something that looked like cookie dough. Yum! "He's someone I can see being my best friend," Michelle said. Then, they headed to her home! Brandon laid a huge kiss on her and was so honored that she brought him there.

Her parents were not home, so his nerves went back down. She gave him a tour of her childhood home. "She's walking me through her heart," Brandon said. Aw! "I like you," Brandon said to Michelle as he kissed her. Then he asked if it was ok with her parents that he was in her room. She laughed and told him they would go swimming. He wore one of her dad's swimsuits. They of course hit up the hot tub. They were having the best time when her parents suddenly came home! She was sucking face with Brandon and they're like, "Michelle?" Maybe not the first impression that Brandon wanted to make, wearing her dad's swim trunks. "Those look familiar," Michelle's dad said. "Sorry for kissing your daughter," he said. HA!

Once they were all dressed, they sat down to talk with Michelle's parents. "She's the most special person I've ever met," Brandon told her parents. Her mom loved that answer. Brandon asked for advice about relationships from her parents and they told him to put his partner first and also be best friends. When they had some time alone, Brandon asked her parents for their blessing and they said, "If she is happy and she chooses, and she thinks you are the one, you have our blessing." They really seemed to like Brandon!

At dinner, Brandon told Michelle that he felt the best he's ever felt so far and that her parents were the nicest, most genuine people he had ever met. He said he did his best to put his best foot forward. He told Michelle that she would meet his mom, dad, and brother. Brandon said he wished she could meet his grandpa because he was his best friend, but he, unfortunately, passed away. He then gave her a bracelet that his mom made. She told Brandon to give it to Michelle if he thinks she's the one and if they see it on her, they'd give her the same love they give Brandon. Aw! Michelle said she would accept the bracelet! "It's one of the most meaningful gifts I've ever received from someone, you make me feel really special all the time," Michelle said. "I'm falling in love with you," Brandon said. Michelle said that her heart was going a mile a minute. Then, she offered Brandon the rose!

Rose Ceremony
Michelle decided her mind was made up and that there would be no cocktail party, it was straight to the rose ceremony.

1) Nayte (Group Date Rose)
2) Brandon (One-on-One)
3) Joe
4) Rodney
Wow, that meant that Olu and Rick were eliminated. This was a tough one; they all seemed like great guys.

Preview of Hometowns
Michelle and Rodney visit an apple orchard because of course, they do! Brandon and Michelle go to a skate park. Joe takes Michelle to a pretend prom. Nayte seems to have a hard time on his hometown date. At one point, Michelle says, "I feel nauseous."

30 charming men will join Michelle Young on her romantic journey when season 18 starts Oct. 19, 2021 on ABC.