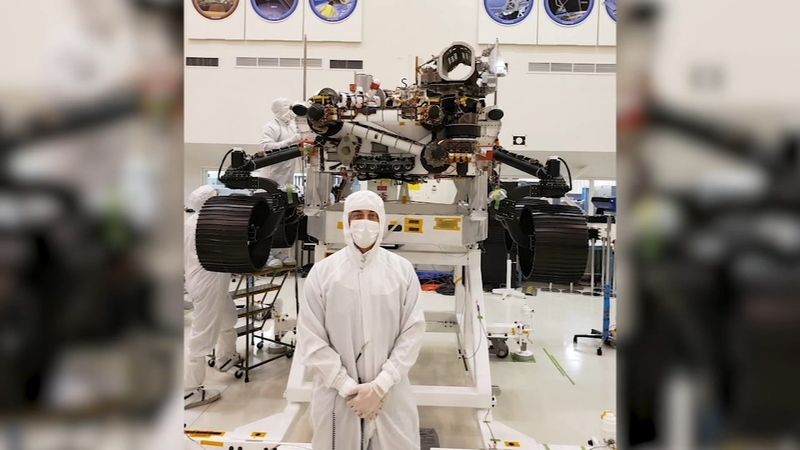 FRESNO, Calif. (KFSN) -- The Perseverance Rover is sending back incredible images from Mars, and we're able to see them in high-resolution thanks to the work of a Central Valley native.

Colin McKinney is an electrical engineer with the Jet Propulsion Lab, which is responsible for the 23 cameras on the Perseverance rover.

Mckinney took on the role of Product Delivery Manager for the Mars 2020 mission at 28 years old.

He helped lead a team of 30 scientists, technicians, and engineers who helped design and create cameras, including the one that allowed scientists to see the first picture of Mars moments after its successful landing on Thursday.

Mckinney and his wife watched the landing, emotional as his hard work could be seen billions of miles away.

"They were screaming and I had some tears of joy as we got the confirmation that touchdown happened. We see those images coming back, you know, was six years of my life that I spent from the beginning of inception of these cameras, all the way to their installation on the rover, and to see that come to fruition really kind of brought that entire experience boil down into that one moment. Myself, my team and my family are all jumping up and down and tears of joy," Mckinney said.

Mckinney now lives in Southern California, but grew up in the Valley.

Mckinney said his time in the G.A.T.E program, the school band, as well as his advanced classes helped push him to reach for the stars.

"I was in the band in music growing up. I was the drum major at Clovis West High School in 2003 and 2004 and it was really the engagement in in music I believe that gave me a sense of teamwork, responsibility and help with individual character development that happens in in any large team environment. Through my time in high school, Clovis West, the availability of AP classes to challenge me to be able to dive further into the technical math and science areas prepared me to go to college and prepare me to do well," McKinney said.

He said his upbringing and his own perseverance led him to take part in this new chapter of space exploration.