Meadow restoration in the mountains is creating more water for the Valley.
KFSN 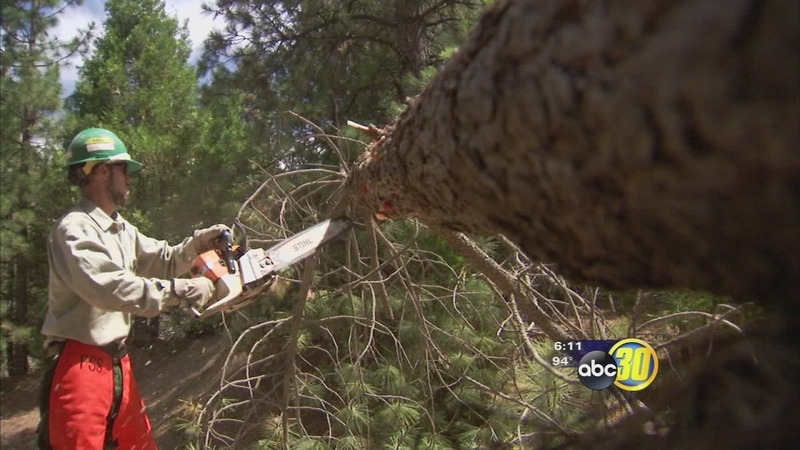 MADERA COUNTY, Calif. (KFSN) -- In the Madera County foothills, above Oakhurst, Native American tribes and the Forest Service are working together on a solution to California's drought. It doesn't involve building dams, or digging wells. Instead, they're chopping down trees. It's an ancient practice producing more water.

On a July morning at the Progeny Meadow in the Sierra National Forest, the scent of burning sage filled the air. About a dozen people gathered in a circle to listen to a voice raised in prayer, asking for ancestors' blessing before the day's work began. That voice belongs to Ron Goode, tribal chairman of the North Fork Mono Indians.

He pointed out a section overgrown with trees: "These are water suckers. They take a lot of water." He knows a thing or two about the forest ecosystem. His people have been here for thousands of years. "The more water they're pulling out of the meadow, that's also less amount of water going down to the Valley," he explained.

Goode is leading the effort to restore the thousands of meadows that dot the Sierra Nevada, to restore them to the way they were when his people lived on these lands -- wide open, lush and thriving with plants and animals. It's backbreaking work, involving chainsaws, axes and saws. Goode said, "We spent two weeks cutting and we're only at 70 percent, but look at what we've accomplished. That can be done to every meadow. Every meadow can be opened up."

While chopping down trees might not seem like restoration, Goode says it's vital. When the meadows become overgrown, any rain or snowfall gets sucked up by the trees, instead of soaking into the aquifers and feeding the streams. Thanks to their efforts the water is flowing, even in late July. This is the same water that eventually ends up in the Valley's rivers and reservoirs. A University of California study found forest thinning could add up to 16 percent more water flow yearly out of the Sierra Nevada and into California's water supply.

Goode sees this work as a long-term solution to California's drought: "As Native Americans we know for a fact that there's another drought coming in the next 10 years. But if you're not preparing for the future, you're gonna have the same problem the next time a drought comes." Because only when there's water, can there be life. Since the meadow restoration work began, dozens of species have returned to live here in the meadow, from birds, to butterflies, to beetles. Some species are not so welcome, like the invasive thistle plants. Those too are removed.

Forest service crews work side by side with the Native American tribes in a partnership that is now looking to expand to the public. Dirk Charley is also Native American and serves as the liaison between the Forest Service and local tribes: "Oh, there's still a lot to do. Therefore by doing this, you're educating the people, you're able to invite them to come and join. And make a difference."

A difference that is already paying off. Meadows are also natural fire breaks. And fewer trees and debris on the ground mean less fuel for wildfires, like the recent Sky Fire, which burned dangerously close to several of the meadows.