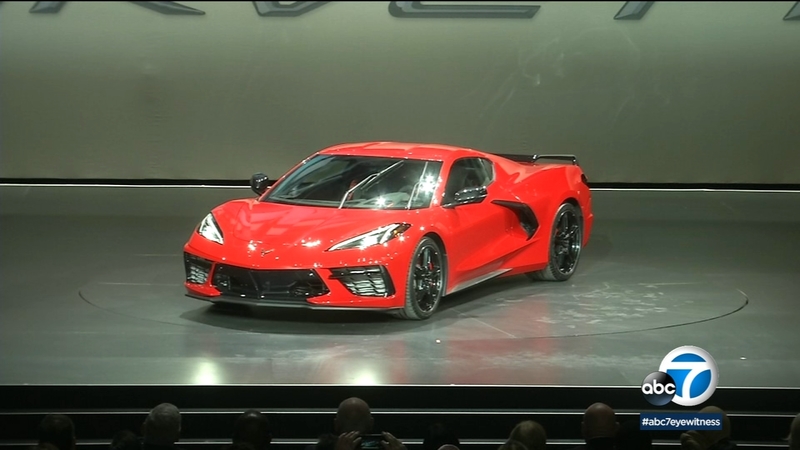 A look at the new 2020 Corvette Stingray

If you're going to introduce a flashy car like the Corvette, hold a flashy debut. And that's just what Chevrolet did, at one of the vintage Marine Corp hangars in Tustin Thursday.

There was some timely flash with this one, during a week honoring Apollo 11 and the first moon landing.

Guests of honor were two real-life former astronauts, Scott Kelly and Mae Jemison. Astronauts and Corvettes go way back to the 1960s.

But the real guest of honor soon followed. Under flashing lights and loud music, the 2020 Corvette Stingray emerged from the darkness to great applause from an assembled crowd of journalists, dealers, and members of Corvette clubs.

It's a Corvette like no other. The biggest change is a switch to a mid-engine design, like Lamborghinis, most Ferraris, and all McClaren supercars. The new layout is part of a high-tech makeover for the future.

"The time has come today. And we feel that both Corvette traditionalists and potential new customers will embrace the change in layout," said Mark Reuss, General Motors president, who oversaw the development of the new Chevy sports car.

That mid-mounted 6.2 liter V8 engine, which can produce up to 490 horsepower, connects to an advanced 8-speed automatic transmission. Sorry, no stick-shift offered after all these years. Though some may be disappointed by this, the new dual-clutch gearbox is able to perform at a much higher level than a manual, or a conventional automatic.

"I'm a big Corvette enthusiast, and I've got both manual transmission Corvettes, and automatics. This is more than I think anybody expects it to be," GM's Reuss told me after his stage presentation.

And for what it's worth, the original Corvette in 1953 only had an automatic transmission. The 'vette finally got a 3-speed manual in 1955, and an optional 4-speed in 1957. The outgoing 2019 Corvette has a 7-speed manual, but only a rather small percentage of buyers actually choose it.

From the beginning, the Corvette has always been a somewhat affordable sports car, compared to Porsches, Ferraris, and others that offer very high performance. When rumors started going around that the new Corvette was going to go mid-engine, rumors also started flying that it would be a much more expensive car, perhaps costing well in excess of $100,000.

At the end of his stage presentation, GM president Mark Reuss gave the big news that squashed those rumors. The new 2020 Corvette will start at under $60,000. That announcement was a mic drop moment in front of an enthusiastic crowd, and drew a huge round of applause.

"I didn't actually have a microphone to drop, it was on my lapel. But if I did I would have dropped it. And that's for our customers. Being able to attain this car, we're all about that," said a beaming Reuss afterward.

The price, of course, will climb with options.

There are lots of cool stuff on tap, like a way to electronically raise up the front of the car 2 inches to avoid scraping on driveways and speed bumps, which is often an issue for performance cars with low front spoilers.

The system will even remember where those driveways and bumps are, if you like, via GPS. So you don't have to stop to raise the car every time you enter your driveway, for example. The Corvette will know you're there, and raise the front end up.

And of course, there's performance. Chevrolet is estimating 0-60 times of 2.9 seconds.

And style, with a look that's both newly exotic, yet familiar. And there's a high degree of practicality, for a sports car. Since the engine is toward the middle of the car, there are two luggage compartments: one in the front, and one at the very rear. Chevrolet designers say many people like to do weekend trips in their Corvettes, so things like luggage capacity are actually welcomed by customers.