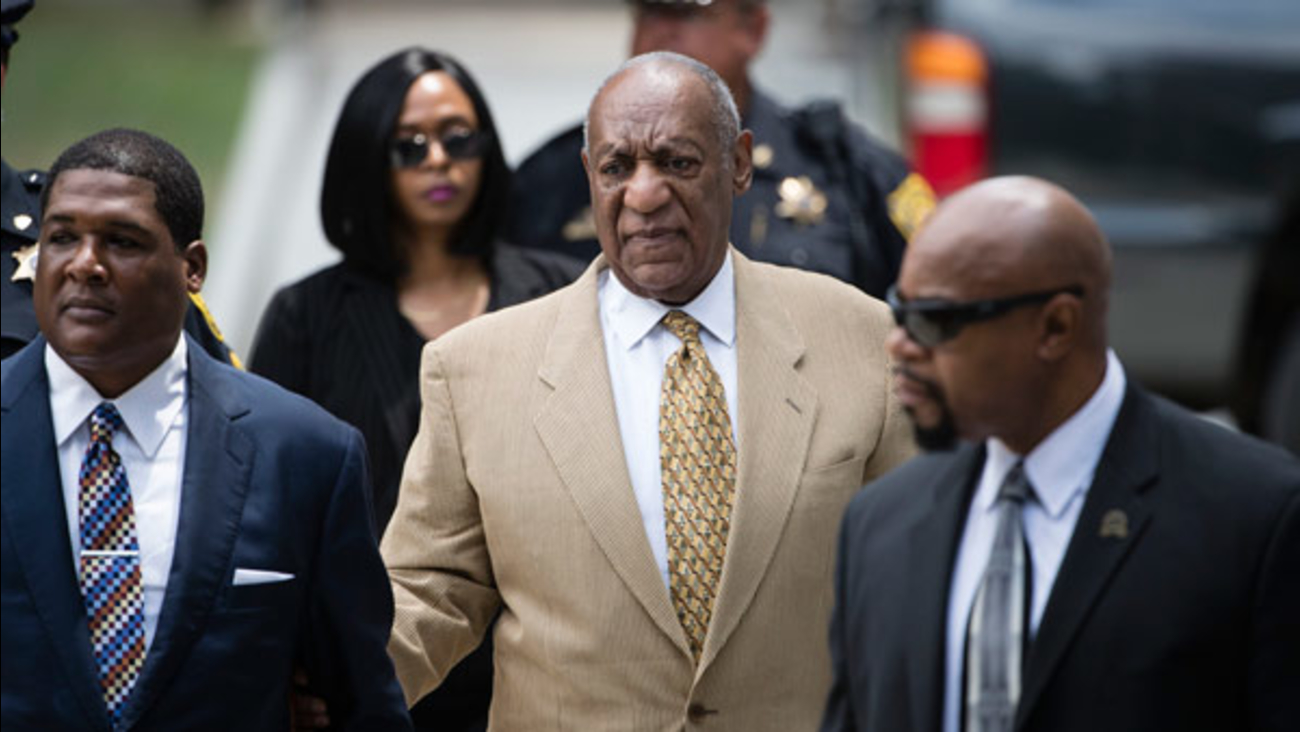 NORRISTOWN, Pa. -- A judge on Thursday denied Bill Cosby's effort to compel the accuser in his criminal sex assault case to testify before trial, ruling the comedian shouldn't get a new preliminary hearing.

Earlier, Cosby's lawyers told the judge they need to cross-examine accuser Andrea Constand before trial because her statement to police raised more questions than it answered.

Judge rules Cosby case can go forward without his sex assault accuser having to testify live at another hearing.

Andrea constand's deposition from earlier civil case was adequate to have the show biz legend stand trial for sex assault..no trial date yet

The defense asked the trial judge, Steven T. O'Neill, to dismiss the case or schedule a new preliminary hearing.

Judge in #Cosby case rules there IS enough evidence for him to stand trial, denying defense attempt to have the case dismissed.@6abc

The comedian's lawyers said a lower court found probable cause this spring based solely on decade-old police statements, and they complained that defense lawyers had no way to challenge the allegations.

Cosby lawyer Christopher Tayback said prosecutors' use of the hearsay testimony rule "blows the doors off" due process.

"There is no rule that says, 'The court has to follow this rule, even if it violates due process,'" he said.

The 78-year-old comedian arrived just after 1 p.m. Thursday in a tan suit jacket and tie, holding onto the arm of an aide.

Montgomery County District Attorney Kevin Steele countered that the right of defendants like Cosby to confront their accusers in court doesn't apply at Pennsylvania preliminary hearings.

Steele told the judge he was using the 2013 rule change to spare Cosby Constand and other sex crime victims from multiple cross-examinations.

"It's our position that we're not going to re-traumatize victims at preliminary hearings," Steele told the judge, adding that he's using the rule change in a variety of sex assault cases, not just Cosby's.

Cosby, 78, was held for trial in May based on his and Constand's police statements from 2005.

Cosby is charged with felony indecent assault and accused of drugging and molesting Constand in 2004. Authorities reopened the case last year after learning he had acknowledged in a deposition that he had given Constand pills and then engaged in sex acts with her.

They also considered the dozens of other women who have raised similar claims in the decade since Constand went to police in 2005.

Cosby calls their encounter consensual and describes the blue pills he gave her as Benadryl. He said he sometimes took the same allergy medicine to help him fall asleep.

The attorneys representing Cosby have released the following statement:

Once again the Prosecution had the opportunity and the obligation to place Mr. Cosby's accuser under oath so that we can search for the truth but they refused. In this Courthouse and in this State, we have always protected the liberty of our citizens by requiring accusations like these to be tested by an examination under oath but not today.

Prosecutors chose not to have Constand testify at the May preliminary hearing, citing the 2013 state Superior Court ruling that allows hearsay testimony at that stage to spare accusers from repeated court appearances. However, the state Supreme Court has agreed to review the decision, leading Cosby's lawyers to challenge it. The high court has not said when it will hear arguments on the issue.

Constand told police the drugs left her semiconscious and unable to move. Her lawyers believe Cosby gave her something stronger than Benadryl.

They said Cosby's graphic description of the encounter at the heart of his case shows "consciousness of guilt."

Steele read excerpts in court Thursday from the deposition in which Cosby said he gave Constand an over-the-counter antihistamine and penetrated her with his fingers.

Steele compared Cosby's behavior to that of a date rapist who spikes a victim's drink, knocking her unconscious before violating her.

"She is not in a state that she is able to consent to any of this," Steele said.

The actor was known as America's Dad for his beloved portrayal of Dr. Cliff Huxtable on his top-ranked TV show, which ran from 1984 to 1992.

Cosby also is fighting Constand and other accusers in civil court, where he has been sued for defamation - and has struck back with countersuits - over his denial of their sex assault claims.

The Associated Press does not normally identify people who say they were victims of sex crimes unless they agree to be named publicly, which Constand has done.