3 stabbed at KKK gathering in Anaheim, including 1 with flag pole 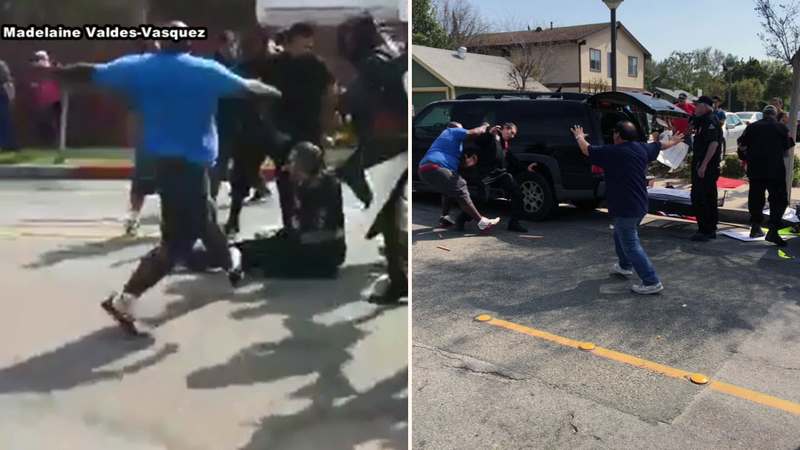 3 stabbed at KKK gathering in Anaheim

ANAHEIM, Calif. -- Violence erupted at a Ku Klux Klan rally in Anaheim on Saturday as counter-protesters clashed with Klansmen.

Three people were stabbed, including one critically, as the KKK staged an anti-immigration rally, according to the Anaheim Police Department.

The rally was held at Pearson Park, and officers said as soon Klan members arrived, they were attacked by counter-protesters who showed up beforehand.

According to witnesses, a KKK member stabbed a counter-protester with the decorative end of a flag pole holding a Confederate flag. Police confirmed the victim was stabbed with a flag pole, but could not confirm if the flag had an American flag or Confederate flag attached to it.

The mayhem spread across an entire city block as video captured victims bleeding from stab wounds and members of the KKK being stomped on by counter-protesters.

Police said officers were present when the violence erupted, but several witnesses at the scene disputed those claims to ABC7.

Brian Levin, director of California State University, San Bernardino's Center for the Study of Hate and Extremism, echoed the sentiment that he did not see any uniformed officers when the brawl began.

"When the Klan truck, that Klan SUV was parking and taking materials out, from my vantage point I did not see a uniformed presence at that time and my photographs and video establish that," Levin told ABC7.

Chris Barker, who identified himself as the "imperial wizard" of the Loyal White Knights of the KKK, said his members were holding a peaceful anti-immigration demonstration and acted in self-defense.

"If we're attacked we will attack back," said Barker, who did not attend the rally and spoke by phone from North Carolina. The organization lists Pelham, N.C., as its headquarters.

Police said 13 people were detained, including six Klansmen in connection with the three stabbings and seven counter-protesters suspected of attacking KKK members.

All the injured were male, according to officials.

The KKK has a long history in Anaheim. In the 1920s some Klansmen held elected office in the city, which was overwhelmingly white, but now has a majority of Hispanics among its roughly 350,000 residents.

In January 2015, packets containing fliers condemning Martin Luther King Jr. and supporting the Ku Klux Klan were left in the driveways of about 40 homes in Santa Ana, about 8 miles south of Anaheim.

The fliers opened with the heading "On Martin Luther King Day, you are celebrating a communist pervert." The bottom of the fliers stated they came from the "Loyal White Knights of the Ku Klux Klan."

Nationwide, the number of active KKK groups increased to 190 in 2015 after falling in 2013 and 2014, according to the Southern Poverty Law Center, which tracks hate group.