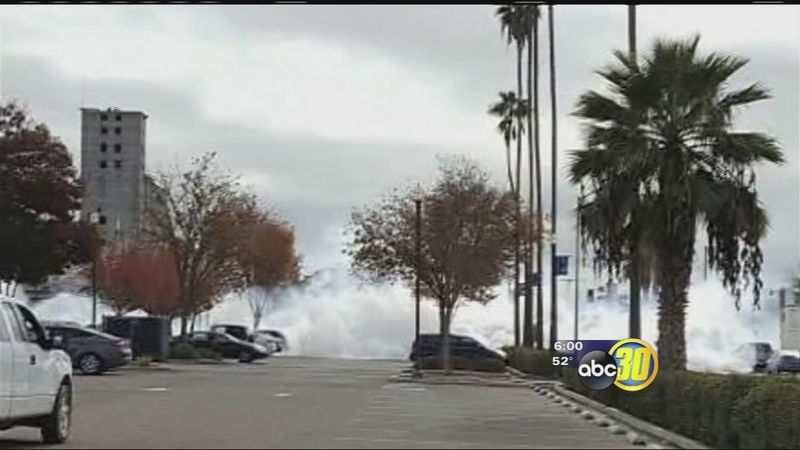 AREAS OF DOWNTOWN CORCORAN UNDER EVACUATION AFTER AMMONIA SPILL

CORCORAN, Calif. (KFSN) -- A chemical fog sent people running for cover in Corcoran after a tanker truck filled with a type of ammonia crashed and sent toxic fumes into the air.

Roughly 120 people were evacuated, and officials have now reopened the roads after they were shut down for more than five hours.

A massive big rig carrying more than 3,000 gallons of anhydrous ammonia was on its side, just feet away from several mangled street signs and lights. It turned a corner and crashed to the ground, breaking off a valve and sending a huge plume of toxic fumes into the air.

"It was a really large cloud spewing from this tank, and I recognized it as ammonia from the smell," Corcoran Police Chief Reuben Shortnancy said.

Shortnancy said the hazardous situation prompted the evacuation of city hall, a nearby office building, a senior living facility and the Amtrak station. The smoke covered a large area and hazardous liquid seeped into the streets.

Anhydrous ammonia is used for irrigation by farmers but is usually diluted, and the incident scared people living in a nearby senior facility.

"And all of a sudden I look out and I see the semi on its side and I saw the smoke and then I smelled something I never smelled before," said Roger dial, who was evacuated. "It's like, 'Okay, what's going on here."

"It can take your breath away and kill you, that's how serious," Joe Bega added.

Marlissa Davis was waiting at the Amtrak station when the tanker crashed. At first, they didn't realize what the fumes were.

"Then someone yelled at us, 'That's ammonia you need to run away it'll kill you if you inhale it,'" she recalled. "So, we kind of panicked and kept running away, and then I stopped and took a couple pictures and my mom was like get out of here. We need to leave."

Many who were evacuated took shelter at the Corcoran Veterans Hall. Kings County fire officials say the major incident prompted shutting down a number of streets in Downtown Corcoran, closing down businesses. They're thankful no one was seriously hurt.

"It was a major incident and we only had two people who were seen by ambulance but not transported," Clay Smith with Kings County Fire said.