Investigators search for cause of deadly medevac helicopter crash 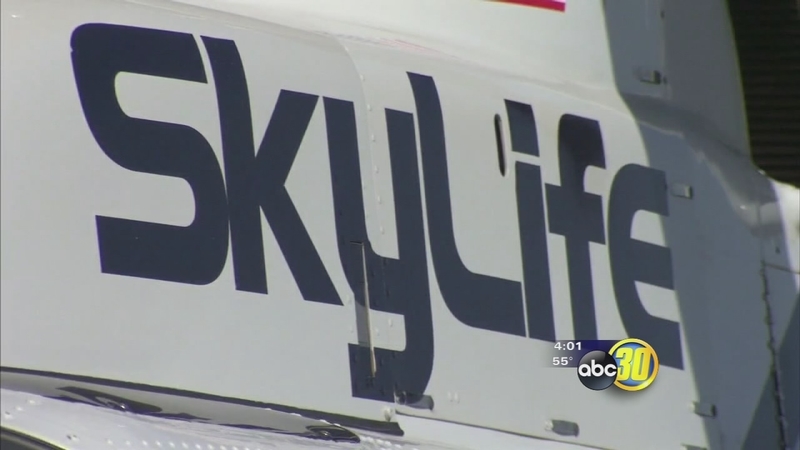 KERN COUNTY. (KFSN) -- Investigators are looking into the cause of a helicopter crash Thursday night in Kern County that left four people are dead.

A Kern County Sheriff's Helicopter found the debris field Thursday night about an hour and a half after the crash. The SkyLife helicopter went down in a pasture and came to rest on the slope of a hill. Coroner transport crews removed the victims from the wreckage Friday afternoon.

Investigators from the Federal Aviation Administration and National Transportation Safety Board till work to figure out what went wrong aboard the helicopter bound for San Joaquin Community Hospital in Bakersfield. Kern County officials say the debris field spanned about 50 yards. "It's fairly intact," Ray Pruitt with the Kern County Sheriff department. "The cab is fairly intact. It appeared that the tail had broken off and was a short distance from the cabin."

Kern County Sheriff's officials say it does not appear power lines were a factor in the deadly crash. "There are power lines in the area," Pruitt said. "But from what I could see the area where the aircraft actually went down doesn't appear that there are any power lines in that immediate area."

Based on air traffic transmissions, attempts to locate the missing chopper were hampered because of the bad weather. Another medivac pilot also tried to assist in the search.

"Medivac one, Bakersfield tower, I have those coordinates for you, do you copy."
"Medivac one, negative, we're not going to go out there. We can see the weather from here, it's pretty bad."
"Roger, you returning to the field?"
"Affirmative, turning around," a transmission log said.

Kern County deputies also said it was a challenge to find the wreckage because of the darkness combined with the winter storm.

"It was raining obviously last night, and it was foggy in the area and it was dark so it was difficult initially to locate it," Pruitt said. "But I believe that one of our air units was able to locate the crash site and then direct deputies in vehicles to the area and they were able to find the site and hike in."

Once deputies discovered there were no survivors, and it would be a recovery mission, they secured the scene overnight until federal officials arrived. The victims were taken to the Kern County morgue in Bakersfield and an autopsy will be performed on each victim to determine the exact cause of death.

Aviation officials say it could take several months or even longer to determine a cause of the crash.
Related topics:
portervillehelicopterhelicopter crashcaliforniacrash
Copyright © 2021 KFSN-TV. All Rights Reserved.
CALIFORNIA