It's over: Britain files for divorce from the European Union 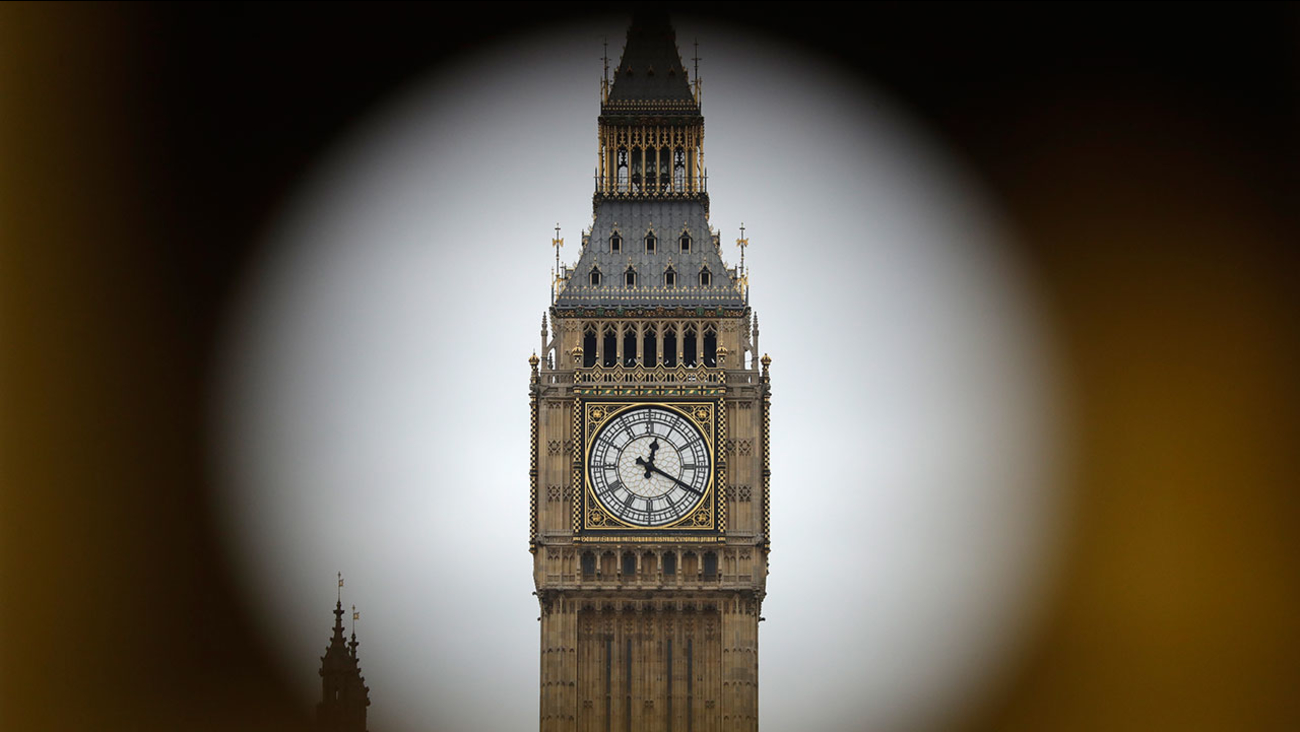 The Elizabeth Tower at Houses of Parliament containing the bell know as "Big Ben" are framed by a hole in central London, Wednesday, March 29, 2017. (Matt Dunham)

LONDON -- The United Kingdom filed for divorce from the European Union on Wednesday, overturning four decades of integration with its neighbors, demolishing the notion that EU expansion is inevitable and shaking the foundations of a bloc that is facing challenges to its identity and its place in the world.

"Today the government acts on the democratic will of the British people." Prime Minister Theresa May told lawmakers in the House of Commons, adding, "This is an historic moment from which there can be no turning back."

Tusk tweeted that "after nine months the UK has delivered," followed by a photo of Barrow handing him the letter in front of British and EU flags in Brussels.

There is "no reason to pretend this is a happy day," Tusk told reporters later, emphasizing that the priority now is to minimize costs for EU citizens and member states.

To Britain, he said: "We already miss you."

But for Britons who voted 52 to 48 percent to leave the bloc in a referendum nine months ago, it was a time for celebration.

Former U.K. Independence Party leader Nigel Farage, who campaigned for years to take Brexit from fringe cause to reality, said Britain had passed "the point of no return."

"I can still, to be honest with you, scarcely believe today has come," he said.

For "remain" campaigners, it was time to fight for a divorce settlement that preserves what they see as key benefits of EU membership, including free trade in goods and services and the right to live and work anywhere in the bloc.

"The phony war is over," said Joe Carberry, co-director of the pro-EU pressure group Open Britain. He said Britain had decided that it would leave the bloc - but "the issue of how we will leave, and the democratic checks and balances along the process of the negotiations, remains unresolved."

May's six-page letter to Tusk was polite and conciliatory, stressing that Britons want to remain "committed partners and allies to our friends across the continent."

She said the two sides should "engage with one another constructively and respectfully, in a spirit of sincere cooperation."

European leaders expressed dismay, with Danish Prime Minister Lars Loekke Rasmussen saying Britain's goodbye to the European Union is "incredibly sad" and he expects "many bumps on the road."

Germany's Foreign Ministry said Britain would remain a "close partner and friend" of the EU, but that "being a close friend is not the same as being part of the family."

The loss of a major member is destabilizing for the EU, which is battling to contain a tide of nationalist and populist sentiment and faces unprecedented antipathy from the new resident of the White House.

It is even more tumultuous for Britain. For all the U.K. government's confident talk of forging a close and friendly new relationship with its neighbors, it cannot be sure what it's future relationship with the bloc will look like - whether businesses will freely be able to trade, students to study abroad or pensioners to retire with ease in other EU states. Those things have become part of life since the U.K. joined what was then called the European Economic Community in 1973.

It's not even certain that the United Kingdom will survive the exit intact. Scotland's parliament voted Tuesday to back First Minister Nicola Sturgeon's call for a referendum on independence within two years. Scottish voters backed remaining in the EU in last year's vote, and Sturgeon insists Scotland must not be "taken down a path that we do not want to go down without a choice."

May insists "now is not the time" for a referendum, setting her on course for a showdown with the Edinburgh administration just when the U.K. government wants to devote all its energies to the EU talks.

The trigger for all the economic and constitutional uncertainty is Article 50, a previously obscure clause of the EU's Lisbon Treaty that allows a member state to withdraw from the bloc. The two sides now have until March 2019 to agree on a divorce settlement and - if possible - establish a new relationship between Britain, the world's fifth-largest economy, and the EU, a vast single market stretching over 27 countries and half a billion people.

May said Britain's aim was to reach a deal on divorce terms and a new relationship within the two years - something EU officials say is unlikely. May conceded Wednesday that there would have to be a "phased process of implementation."

Tusk has said that within 48 hours he will respond with a draft negotiating guidelines for the remaining 27 member states to consider. Leaders of those nations will then meet on April 29 to finalize their negotiating platform before instructing the EU's chief negotiator, French diplomat Michel Barnier.

Then Barnier will sit down with his British counterpart, Davis, who has said the first item on the agenda will probably be: "How we do this?"

As in many divorces, the first area of conflict is likely to be money. The EU wants Britain to pay a hefty bill - Jean-Claude Juncker, president of the EU's executive Commission, put it at around 50 billion euros ($63 billion) - to cover pension liabilities for EU staff and other commitments the U.K. has agreed to.

British negotiators are sure to quibble over the size of the tab.

Davis said Monday that Britain will "meet our international obligations," but added: "I don't think we are going to be seeing that sort of money change hands."

Negotiations will soon hit a major contraction: Britain wants "frictionless" free trade, but says it will restore control of immigration, ending the right of EU citizens to live and work in Britain. The EU says Britain can't have full access to the single market if it doesn't accept free movement, one of the bloc's key principles.

Both Britain and the EU say a top priority will be guaranteeing the rights of 3 million EU citizens living in Britain, and 1 million Britons living elsewhere in the bloc.

The two sides also appear to disagree on how the talks will unfold. EU officials say the divorce terms must be settled before negotiators can turn to the U.K.'s future relationship with the bloc. British officials want the two things discussed simultaneously.

May has suggested that if talks stall she could walk away, saying that "no deal for Britain is better than a bad deal for Britain." But she backed away from that notion Wednesday, saying in her letter that "is not the outcome that either side should seek."

That prospect of no deal alarms many British businesses. If Britain crashed out of the EU without a trade deal it would fall back onto World Trade Organization rules, meaning tariffs and other barriers to trade.

Parliament's Foreign Affairs Committee has warned that the British government has not done enough for the "real prospect" that talks may break down, ending in no deal and "mutually assured damage" to both Britain and the EU.

Even if talks go well, EU leaders say there is little chance a final agreement on relations between the two parties will be reached by 2019. Some say it could take a decade.

Carberry, from Open Britain, accused the government of offering an unrealistic picture of the costs of Brexit.

"They are saying everyone's going to get free money and a free pony, basically," he said. "The government is going to need to start being up front with people about the risks and outline more clearly how they are going to mitigate against those risks."

But Brendan Chilton of anti-EU group Labour Leave predicted that soon "the chest-beating will stop and actually you'll get down to cool, hard diplomacy and we'll get a good deal."

"It is in the interests of both parties to get this done as quickly as possible and as amicably as possible," he said.