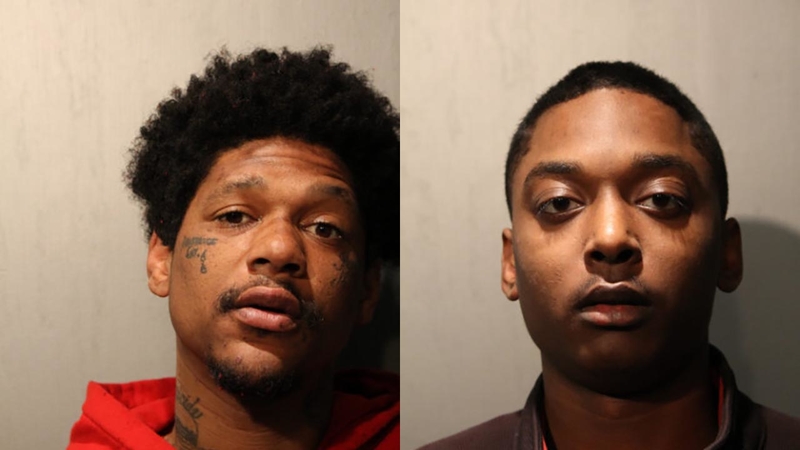 2 charged in shooting of CPD officer

Chicago Police Chief Communications Officer Anthony Guglielmi said Jackson was the shooter and Battle was a co-conspirator. Guglielmi told ABC News that one of the men was an applicant to be a police officer CPD and was arrested during his background polygraph for committing an armed home invasion.He was given probation.

Superintendent Eddie Johnson will speak about the charges at a press conference at 11 a.m.

Officer John Rivera was shot and killed early Saturday morning in River North following a night out with friends. Police are scouring large amounts of surveillance footage showing exactly what happened, according to Superintendent Johnson.

Meanwhile, squad cars from every one of the city's 22 police districts accompanied Officer Rivera's hearse from the Medical Examiner's office to an East Side funeral home Sunday.

His District 6 colleagues saluted his casket as it was taken inside and then consoled each other as they continued to grieve for one of their own.

Officer Rivera lived on the Far South Side with his family. He was just 23 years old and based out of the 6th Police District.

Police said they have footage of him getting into his car on Clark between Erie and Huron accompanied by three friends. Shortly after, three men walked up to the car and didn't say a word before one of them opened fire.

Police have not released a motive for the shooting.

Funeral prayers will be at 9:15 a.m. Friday at Elmwood Chapel. Funeral Mass starts at 10 a.m. at the Church of the Annunciata, located at 11128 S. Avenue G, Chicago.