Orange County became a focal point last week after crowds flocked to beaches to escape the first heat wave of the year.
KABC
By Marc Cota-Robles 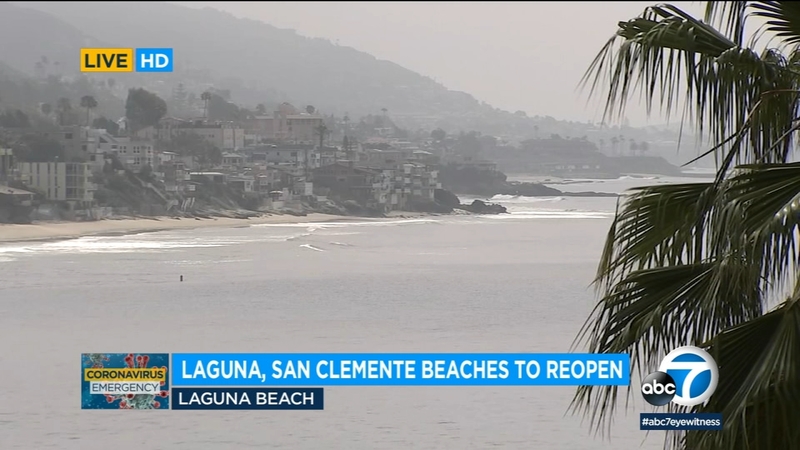 The cities of Huntington Beach, Dana Point and Seal Beach can now reopen their respective beaches with modifications to protect public health and avoid crowding. Just a day before, Newsom announced the reopening of beaches in San Clemente and Laguna Beach.

During his daily news conference, the governor said he's grateful to city government leaders for their plans and looks forward to working with Orange County supervisors to reopen county beaches.

As part of their reopening, San Clemente will break up any large gatherings, allow only for active use of the beach and restrict parking to residents only.

Laguna Beach is open for active use between 6 a.m. and 10 a.m. Monday through Friday. Any violations outside of that timeframe will be strictly enforced.

"Governor Newsom, please understand the force of your own rhetoric. People will no more go to the beaches than they will to the stores if they feel unsafe! They did not feel unsafe at the beaches. They overwhelmingly practiced physical distancing according to local law enforcement and government leaders. If it is good enough for business to trust our citizens to act responsibly and observe your rules, it is good enough for beaches," Wagner said in a written statement.

The Orange County Board of Supervisors were expected to discuss the issue on Tuesday.

Orange County became a focal point last week after crowds flocked to beaches to escape the first heat wave of the year, prompting Newsom's beach shutdown in the county on Friday.

Thousands of people gathered on the streets of Huntington Beach on Friday to protest the statewide stay-at-home orders.

The latest development comes after Gov. Newsom announced the next stage of reopening California's economy is expected to begin as early as Friday.
EMBED More News Videos

Gov. Gavin Newsom announced the reopening of two Orange County beaches on Monday as the state prepares to enter the second phase of reopening amid the coronavirus pandemic.

Two suits filed last week sought an immediate temporary restraining order to overturn the governor's order, but a judge denied that request and set a hearing for later this month. One was filed by the cities of Huntington Beach and Dana Point and another was filed by elected officials in Dana Point, Mission Viejo and San Clemente who were acting as individuals.

The city of Newport Beach has also offered its support for the legal action.

Another lawsuit, filed by the same firm that filed one of last week's actions, was announced Monday. The federal suit filed by former Newport Beach mayor and current councilman Kevin Muldoon argues the governor's shutdown order is unconstitutional.