Veterinarians: sweetener in some food products could cause liver failure in dogs 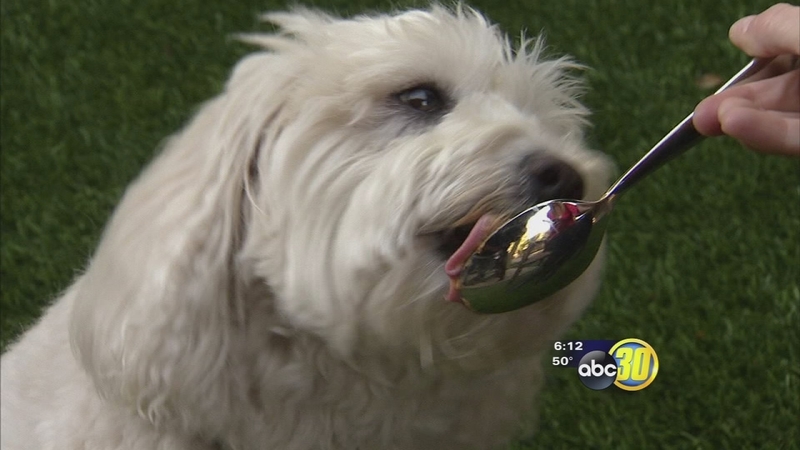 Veterinarians: sweetener in some food products could cause liver failure in dogs

MERCED, Calif. (KFSN) -- Veterinarians are trying to raise awareness about a sweetener that can be deadly for dogs.

It's no secret that a lot of dogs love peanut butter! But many people don't know certain brands now contain a sweetener called "xylitol" that's extremely dangerous for their precious pups.

It's even a surprise to M'lynn Hultgren, who owns a pet salon in downtown Merced and has four furry family members. "It was really surprising, a little nerve-wracking just because we actually use that a lot, not only in making little treats but using them for treats themselves inside toys and other things."

If a dog does eat xylitol, the symptoms can set in fast. It causes their blood sugar to drop rapidly and can ultimately lead to liver failure. Dr. Leah Hill, owner of the Animal Medical Center in Merced, said, "They can, a lot of times, they start shaking, shivering, they can start vomiting, they can become very depressed, and ataxic where they're kind of wobbly, and it can even lead to seizures and coma."

Dr. Hill has seen an increase in xylitol poisoning because it's now being used as a sugar substitute in more human products that pets can get their paws into. From gum to mints to medication and It can even be used for baking. "So there are a lot of different things it can be in, and if you're baking cookies with xylitol, I mean, that's one thing they can definitely get into very easily."

As for peanut butter, we found the traditional brands you can buy at most supermarkets do not contain xylitol, but some sold at health and nutrition stores do. We shared that news with people at the local dog park. "It does disturb me in a way, and it makes me justified in being aware of what we give our dog," said Stephen Mandiberg, dog owner.

Veterinarians say the best way to protect your pet is to check the labels, and if you do suspect they ate something with even a little bit of xylitol be sure to get them to the vet right away. "Most dogs, if they're caught early enough, we can pull them through, it's the dogs we don't see for 24 hours that are really sick by that time, sometimes, it's irreversible liver effects."

Veterinarians say cats do not seem to be as vulnerable to xylitol, but, they say it's a good idea to keep it away from them too, just as a precaution.
Related topics:
mercedhealthdogsmerced countymercedanimal news
Copyright © 2021 KFSN-TV. All Rights Reserved.
TOP STORIES
Merced teacher back home after battle with COVID-19
Biden, Putin meet for long-anticipated summit
Looking back at the ups and downs of COVID in Central CA
24-year-old man shot in southwest Fresno, police say
Arson investigation after fire burns 2 Fresno homes
Fresno reopens public pools amid heat wave
What changes throughout Central California as state reopens
Show More
CA has reopened, but not everyone can go maskless
Suspect involved in standoff in Kings County identified
Fresno police chief proposes $1.9M budget for department
Israeli military launches airstrikes in Gaza
19-year-old arrested on arson charges for NW Fresno fires
More TOP STORIES News