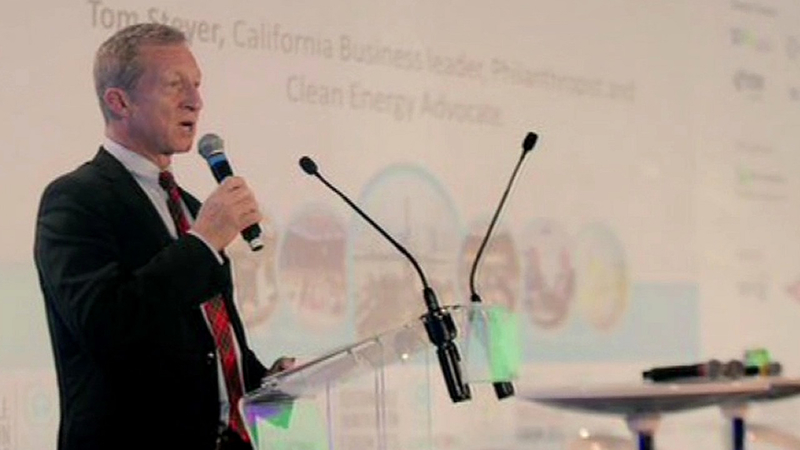 SAN FRANCISCO -- A Bay Area billionaire is working to fight climate change using his own personal fortune and is in Paris taking part in talks to discuss what needs to be done to make a difference.

Amid the dignitaries and heads of state, private citizen Tom Steyer made his fortune in banking and hedge funds. "Before I really learned the facts, we invested in every industry in the world including the fossil fuel industries and as I understood the facts and came to realize them we stopped," he said.

Coal and oil are now the enemy for Steyer. Three years ago, he quit his job to spend much of his fortune promoting wind and solar. "We've all come from an economy that was driven by fossil fuels and we need to go to an economy that isn't," he said.

In spreading that message, Steyer's hosted President Obama at his home. Obama is often greeted by fans, but also protesters against the Keystone XL Pipeline.

For Steyer, that project's defeat was a victory. "It wasn't a no to keystone in our mind so much as a yes, we are going to move to a clean energy economy," he said.

As he headed to the talks in Paris, that optimism only increased. "The good news about Paris is a lot of the work's been done," he said.

Obama had already met with Chinese officials, which is a stark contrast to 2009 when China didn't invite him to a key meeting.

And California Governor Jerry Brown's has been to China. At the Paris talks, the top Chinese negotiator called the governor an old friend. "California is a great example of how this is supposed to work. We are a place, which has some of the most progressive English policies in the world," Steyer said.

But Steyer's fighting what he sees as a step back, a coal depot proposed near the Port of Oakland. "I'm absolutely opposed to the idea that they would ship coal through the Bay Area to China," Steyer said.

Steyer told world leaders solar will be cheaper than coal within two years and he said turning off the lights and biking to work are no longer enough. "Not individually trying to do the right thing, but actually together by implementing policies that push the whole society at the same time to do the right thing," Steyer said.