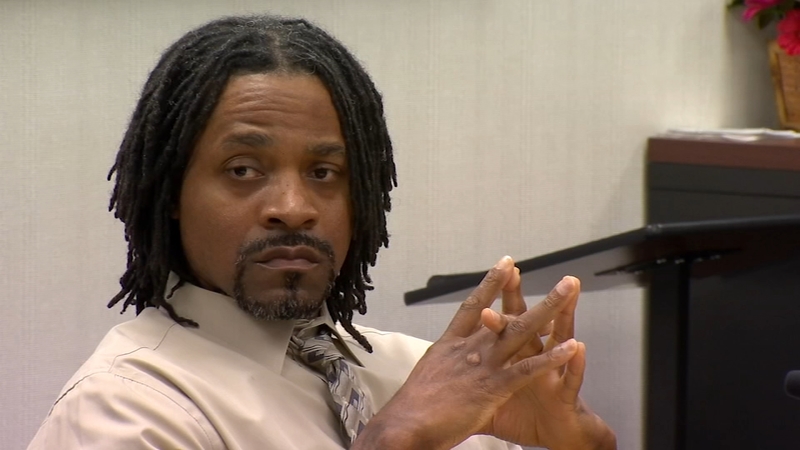 FRESNO, Calif. (KFSN) -- A killer's confessed to shooting four people to death and targeting three of them because of their race.

"I didn't want to do nothing to law enforcement so I just found some white men to kill," said Kori Muhammad in his confession to police.

The second week of his capital murder trial started with his first police interview after his arrest.

From the moment police arrested him, the shooter knew exactly why.

"Because I killed those people and the security guard," he said.

He gunned down security guard Carl Williams on April 13, 2017, telling police Williams had harassed him.

Surveillance video from the motel where it happened told a different story of a sneak attack while Williams talked to the defendant's friend.

Muhammad hid out after that, but got WiFi long enough to see himself named as a suspect on ABC30 five days later.

That's when he changed his plans from trying to leave town to walking downtown and becoming a serial killer with race on his mind.

"When I walked up to the (PG&E) truck, I saw a Mexican driver and a white guy," he said. "I didn't want to target the driver because he was Mexican so I shot the white dude."

And the defendant laid out his decisions in detail to police detectives.

But the defendant didn't make it through the entire confession, deciding to disappear and leave an empty chair behind as he's done a few times during the trial.

"Mr. Muhammad informs me he would like to go back to his cell," defense attorney Richard Beshwate told Judge Jonathan Conklin.

"Recognizing your right to be present, you're asking to return back to your cell?" the judge asked Muhammad.

Before he left court Monday, the defendant flashed a Nation of Islam newsletter for cameras, and his religion -- denounced by mainstream Muslims -- could be part of the case against him.

His confession included a few off the wall comments about his deadly magic, but investigators have argued his belief system may sound like conspiracy theories, but it's openly discussed and accepted in the Nation of Islam.