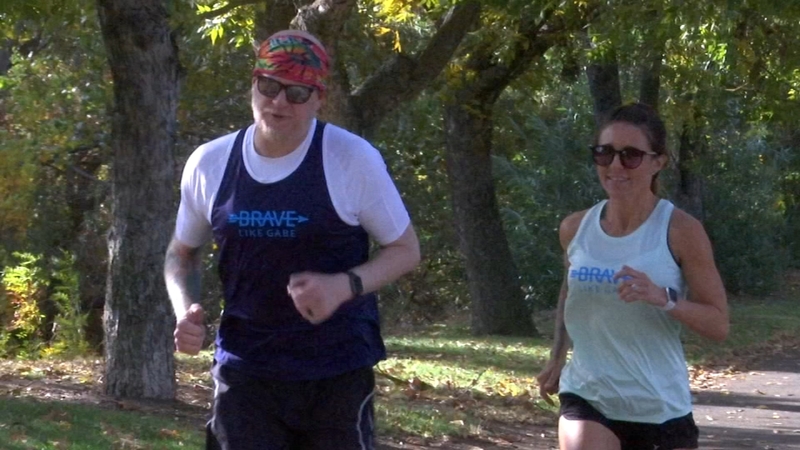 FRESNO, Calif. (KFSN) -- Joel Stetler and his wife Amanda are turning a corner on their marathon training.

"You know, just lots of running and a whole lot of eating," he said.

Their Oakhurst family of five is ready for a weekend in New York and 26.2 miles through the Big Apple.

They're no strangers to endurance challenges, having each finished at least one marathon this year. But it was during a triathlon ten years ago when Joel first noticed the issue motivating them both now.

A growth first appeared in 2009. In 2015, doctors diagnosed him with a slow-growing and rare sarcoma. It now coats his lungs and liver.

"Sadly at this point, it's incurable," Amanda said. "There's no known treatment that can leave him cancer-free."

After eight rounds of chemotherapy didn't work and surgery took out a chunk of his leg, he thought another marathon would be impossible.

But the Brave Like Gabe organization gave him hope.

It raises money to fight rare cancers in honor of a namesake who fought through hers to run several more marathons. After Joel finished the San Francisco Marathon, it got both Stetlers entry into the New York run.

Five years into his fight, Joel says he can actually appreciate what cancer has done for them.

"I hate what it does to me and I hate what it wants to do to me. But I love the trajectory this has put us on, and we are living it out fiercely because of that," he said.

There is no cure for his cancer, but he's not just running out the clock.

The Stetlers are running marathons to help Brave Like Gabe raise money for rare cancer research.

The Lincoln Elementary School teacher says he's living what he tells his kids: be the reason someone tells a good story.