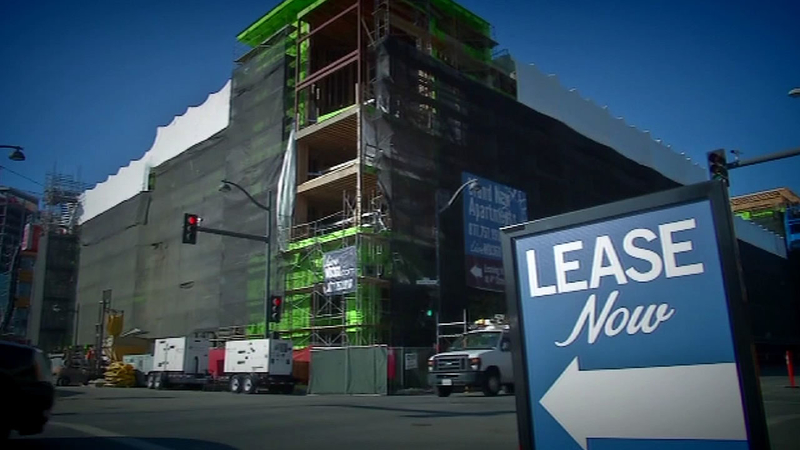 SAN FRANCISCO -- The cost of living in the Bay Area continues to climb. Not only are home prices continuing to surge upwards, rents are too. Rents are up a whopping 52 percent since 2000, so ABC7 News wanted to see just what can you expect to get for your money around the Bay Area.

According to Zillow, the median rent in the city of San Francisco is now $3,991 per month. That's pushing people out of the city and forcing rents to climb all across the Bay Area.

So the staggering and rapid increase in rents got us wondering, just what will you get for your money around the bay? We checked with local agents and asked them each to show us a property near $4,000. We found a wide range in options.

We started with an apartment building in San Francisco's Alamo Square.

J.Wavro Associates agent Brian Brown showed us around. "The living room here has views of the park," he said.

A cleaning crew was busy getting the sunny, one-bedroom, one-bath apartment, with a small office, ready for a new tenant. The rent is $3,650. Parking will cost you an additional $250.

High rents in the city, have many people looking across the Bay Bridge.

Julia Mendoza, from Domain of Oakland, said, "I see a lot of traffic coming into the city from the San Francisco area, just looking for the amenities."

In Oakland, the rents are up more than 20 percent year over year.

Mendoza showed us the amenities that come with an apartment in Downtown Oakland. "You have a stackable washer and dryer," she pointed out.

A two-bedroom, two-full bathroom corner apartment at Domain, in Downtown Oakland rents for $3,500 a month. It has floor to ceiling windows, a modern kitchen, and a closet roughly the size of that office we saw in San Francisco.

On the Peninsula, you'll have plenty of room if you rent a house in San Bruno.

Terry Michaud is with Heritage Realty, he showed us around a property. He said, "There are hardwood floors throughout the home with walnut inlays around the sides."

Three bedrooms, one bathroom, a living room, formal dining room, even an updated kitchen it was listed for just $3,300 a month.

"We think it will be rented fairly quickly," Michaud said.

"For example this same home, if it was in Burlingame, it would probably be $5,000," Michaud said.

Economists say being close to work is driving up housing costs in the South Bay.

Some South Bay cities are seeing double-digit spikes in demand.

"Mountain View, where Google is based, is up 26 percent," Olsen said.

Eugene Korsunsky is with Intempus Realty, he knows first-hand just how insane the rental market is in the South Bay. He told ABC7 News, "I've had some properties where I've posted it on the market, walking out the door for lunch and people call me and want to meet me at the property and write me a check for four years in advance for the rent."

A three-bedroom, two-bath home just steps from Santa Clara University is renting for $3,600 a month. Agents say that's typical for a home like that in the South Bay. The property is also a good example of what many people may need to do to afford it -- three students share the rent.

Economists say that's likely to be the reality of this new economy. More and more people will have to have roommates, or lower their expectations on what they can get for their money.

"How long is it going to last? I don't know, but right now, I don't see any stop in sight," Korsunsky said.

And economists agree rental prices are going to continue to rise. So why is that given all the new construction in the Bay Area? The answer is we simply don't have enough new, affordable housing being built to meet the current and future demand.