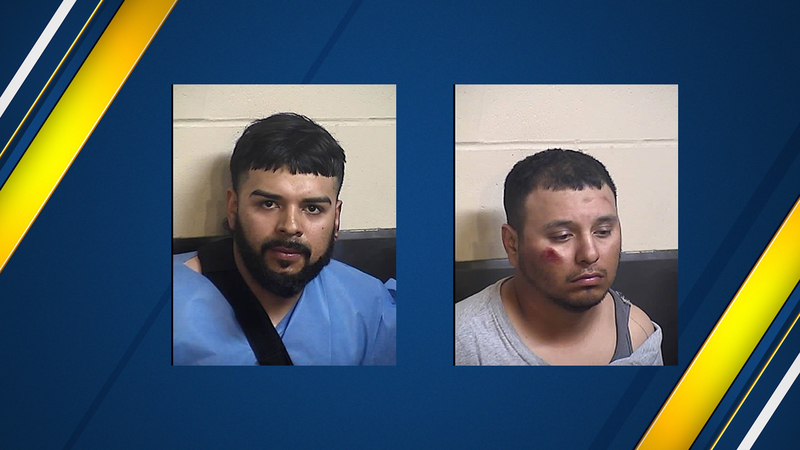 SANGER, Calif. (KFSN) -- It was around 6 pm Tuesday when Sanger police spotted an SUV driving dangerously in a neighborhood near Faller Avenue and 10th Street with three men inside.

Police say at least one was a gang member.

As the officer approached, a passenger jumped out and threw a handgun in someone's yard. The person got back in the SUV and sped off.

A chase began and at one point, the suspects almost crashed into officers.

Police say when the suspects tried turning right onto Almond Avenue, the driver lost control, went over the curb and into the driveway of 65-year-old Minerva Camacho's home.

She was out front checking her mail with her granddaughter and shoved her out of the way.

She saved the little girl's life but the vehicle pinned her as it careened into the house.

After hours of surgery, she died at the hospital.

The suspects ran from the crash, and 31-year-old Salmon Zaragoza and 22-year-old Manuel Adrian Valencia were later arrested.

Neighbor Clinton Warner says, at first, he didn't realize that the commotion outside ended with the death of a beloved neighbor.

"I didn't know that she had been hit by a car or that a car had hit her house," he said,

Clinton says that he would take Minerva's trash cans in and she would invite him to parties and bring him dinner.

On Wednesday, a Sanger Police lieutenant released a written statement detailing the incident but offered no words of comfort for Minerva's family.

Sanger's police chief, city manager and mayor all declined to answer questions from Action News about why the chase continued through tight residential streets and whether the department's pursuit policy will be updated to avoid another tragedy.

Legal analyst Tony Capozzi says the suspects will ultimately be held responsible for the death.

But the police department may also face accountability

"Will the attorney also sue the city of Sanger and the police department for pursuing a chase in a residential area knowing that something like this could have happened," Capozzi said.

The two suspects arrested are facing charges including Gross Vehicular Manslaughter, Assault with a Deadly Weapon on a Police Officer, Felony Evading of a Police Officer resulting in death, Child Endangerment and other related charges.