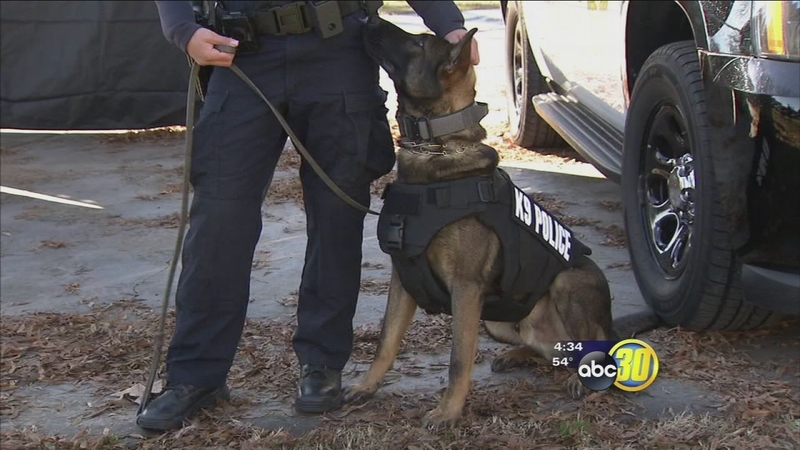 CERES, Calif. (KFSN) -- A loud greeting awaited Bill Westbrook when he handed out a bounty of protection for Ceres police.

Dex, Klouse, and Leo make up three-fourths of the department's canine unit and with Westbrook's help; the entire team is now fitted with customized ballistic vests and a newfound confidence.

"The dogs are just kind of out there. When we're on patrol, when I have to send him on somebody, this is how he goes. Now having a vest, maybe he'll have a little more protection," said Coey Henson, Ceres Police Department.

The vests are bulletproof and stab-proof, so the canine officers will be safer when they move in on potentially armed suspects.

But this day almost didn't happen.

The journey started when injury forced Westbrook into retirement in 2016. He needed to raise $15,000 to keep his own canine partner, Maximus, and the community donated even more than he needed.

Westbrook had enough to buy two vests, including one designed for Dex.

"But unfortunately, that vest got stolen out of my car last summer."

Westbrook was a crime victim within months of leaving Los Banos Police Department. Burglars broke into his car while he attended a Garth Brooks concert in Fresno and took Dex's vest.

But just like with Westbrook's injury, who was hurt fighting a suspect, after every setback, good fortune followed and in much larger portions.

"With the first vest that we bought for him got stolen, so we were able to raise enough money to buy all three of their dog's vests."

And those three will not be the last.