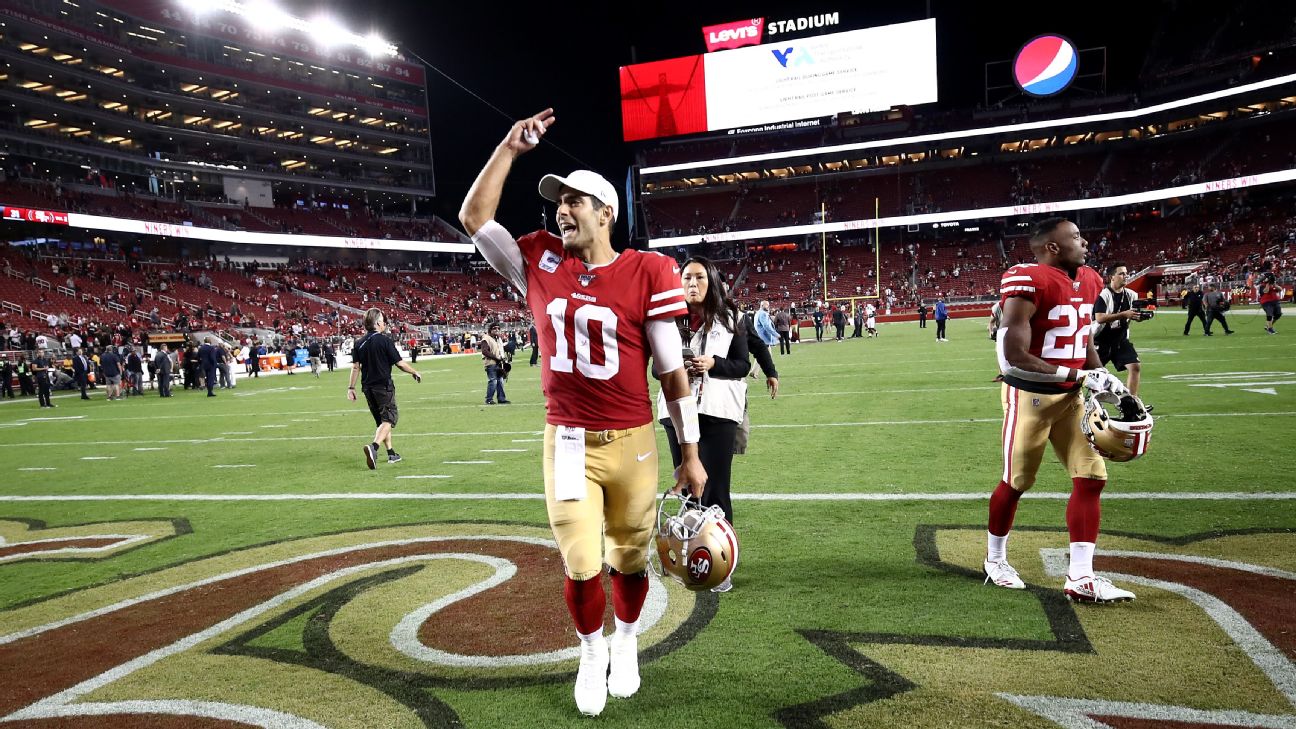 But for the first time since 1990, the Niners closed the first quarter of the season with an unblemished record by throttling the Cleveland Browns 31-3 on Monday night at Levi's Stadium. With the victory, the Niners join the New England Patriots as the NFL's last remaining undefeated teams and stand as the only team in the NFC with a perfect record through the season's first five weeks.

Asked what the 4-0 start means to him, 49ers coach Kyle Shanahan demurred.

"It means it's still early," Shanahan said. "It means we played four games, one less than most people. If you tell me that at the end of the year when the season is over, you'll see me celebrating up here pretty hard. It's going to be a short week, and we've got to get to work on theRamspretty early tomorrow."

The wait for the fourth win was made even longer by an early Week 4 bye and playing on Monday coming out of the bye. During that downtime, the Niners had to hear plenty about being what they started to call "fake undefeated" because their first three opponents had a combined record of 3-9 through the first four weeks.

After the game, cornerback Richard Sherman wasn't interested in gathering praise from those who were non-believers before the team dismantled the Browns.

"You don't worry about it," Sherman said. "You want idiots to sound like idiots, but you want them to hold their position the whole year. Like, don't flip-flop with us. If you said we weren't gonna make it, if you said we were some way early on, just stick with that position. Hold it. Don't try to give us credit now. Don't try to give us credit now. Just stick it."

The 4-0 start is the third for the franchise in the Super Bowl era, and if history is any indication, this could be a special season. According to ESPN Stats & Information, the 49ers have advanced to at least the NFC Championship Game in each of the previous two seasons in which they started 4-0.

The victory was also the 49ers' record-extending 49th on Monday Night Football, the most such wins by any franchise in the league. It ended an ugly streak in which the 49ers had gone winless in their past seven games coming out of a bye week.

To get to 4-0, the 49ers relied on a dominant defensive performance led by rookie defensive end Nick Bosa and the rest of the line, as well as a running game that has steamrolled opponents the past three games.

Bosa spent most of the evening in the Browns' backfield harassing quarterback Baker Mayfield to the tune of four tackles, two sacks, a forced fumble, a fumble recovery, five quarterback hits and one giant flag planting. The Niners limited the Browns to 180 yards, 3.9 yards per play and three points.

"Those guys should get the love this year. I think you see a lot of the highlights and stuff, and you see a lot of the conversations, but you don't see these guys being mentioned for Pro Bowls and All-Pros. These guys are playing Pro Bowl and All-Pro football. This isn't a fluke that we are just running through these teams. You know it's not a joke. It's not a game."

On Monday, the Niners' running game took off almost immediately, with running backMatt Breida's 83-yard touchdown run on the first play from scrimmage, and the team never looked back. On the play, Breida burst through the left side untouched and raced for a touchdown and a quick 7-0 lead.

Shanahan and the Niners got into such an offensive rhythm that tackle Joe Staley told tight end George Kittle after the game that as soon as Shanahan called a pass for him in the third quarter he looked away because he knew it was going for a touchdown.

"It was pretty sick," Kittle said. "He called the touchdown before we even said hike. It was pretty awesome."

San Francisco finished with 275 rushing yards, with an average of 6.3 yards per carry on 40 attempts.

After a long wait to play the Browns, the 49ers won't have to wait long to get back on the field. San Francisco figures to get its toughest test yet on Sunday, when it travels to Los Angeles to play the two-time defending NFC West division champion Rams.

With that in mind, Shanahan made it a point after the game to remind his team that there's still a lot of football to play, and a lot can change. Shanahan was the offensive coordinator for the Atlanta Falcons in 2015 when they started 5-0 and went on to finish 8-8.

"You don't pay attention, and you just go to work," he said. "I think we've got the right guys. I think today was a little lopsided game, but the league is too hard to be overconfident. Every week is a tough week, and we've got a lot of work to do. Still got some guys who are waiting to get back from injury, and that game by no means was perfect." 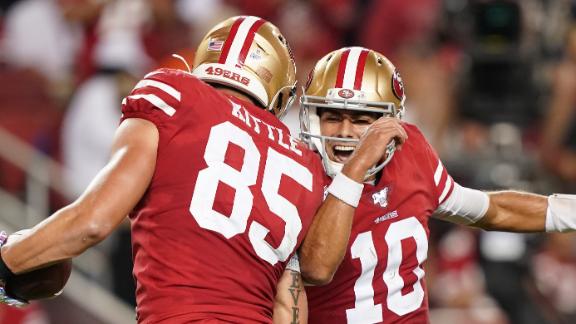 49ers dominate Browns on all sides of the ball
The 49ers take it to the Browns, scoring 31 points, forcing four turnovers and allowing a total of 180 yards of offense as San Francisco wins 31-3. 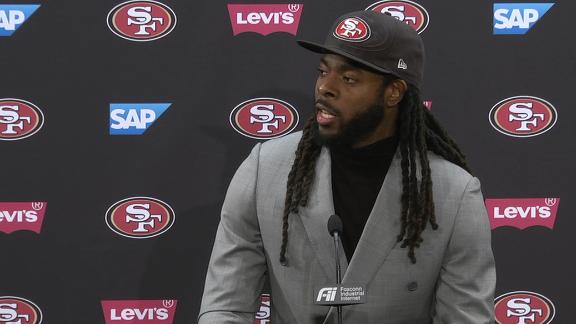 Sherman on the doubters: 'You want idiots to sound like idiots'
Richard Sherman doesn't want anyone to flip-flop their opinion on the 49ers, if you doubted at the beginning of the season he wants you to keep on doubting.
Report a correction or typo
Related topics:
sportsespnsan francisco 49ersnfl
Copyright © 2020 ESPN Internet Ventures. All rights reserved.
More Videos
From CNN Newsource affiliates
TOP STORIES