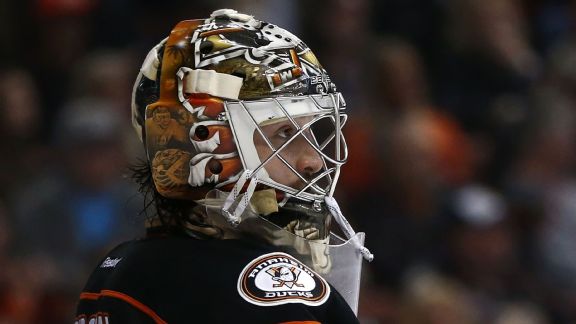 ANAHEIM, Calif. -- Anaheim Ducks goalie John Gibson might be one of the most enigmatic players and personalities in all of hockey, but there is nothing ambiguous about his history in big games.

"He comes off a little bit different," said Ducks GM Bob Murray, a major proponent of Gibson's throughout multiple goalie controversies in Anaheim, "but the one thing about it is that if he has a bad night -- we all have bad nights -- he's very resilient. He comes back, and he's always done that."

Heading into the Western Conference finals against the Nashville Predators, Gibson had the lowest save percentage of any of the four remaining No. 1 goalies in the playoffs. He was widely considered an afterthought in the shadow of a dominant, veteran opponent: Nashville'sPekka Rinne, a former Vezina Trophy finalist who had the highest save percentage of any postseason goalie.

Gibson played spectacularly in a Game 1 loss, and after early stumbles in Game 2 on Sunday, he shut down the Predators in the third period. The Ducks went on to win 5-3. Gibson has been exceptional in the third period throughout the playoffs, posting a .965 save percentage, in contrast to his relatively tepid overall figure of .911.

Gibson had his worst game of the playoffs in Game 6 against theEdmonton Oilers, getting pulled early after allowing three goals on six shots. He would bounce back to help the Ducks win Game 7 by a score of 2-1. The only score he allowed was Ducks defensemanShea Theodore's own-goal.

Gibson, a Pittsburgh native, also has been dismissed by the media at times because of his terse, dispassionate and at times seemingly uninterested persona. Ducks goalie coach Sudarshan Maharaj said he laughs when he watches Gibson give interviews on television. He barely recognizes the stoic figure he sees on camera.

"He's probably the most misunderstood goalie that I think I have ever had," Sudarshan said. "He's extremely funny, very intelligent, very engaging and he's got a wicked sense of humor."

Gibson has weathered assorted competition for the starting job in net for Anaheim from veteran incumbent Jonas Hiller; 2015 starterFrederik Andersen, now with theToronto Maple Leafs; and even his backup,Jonathan Bernier, who challenged for the job with his sound play at points in this season. The Ducks handed the starting job to Gibson after trading Andersen to Toronto for two draft picks last June. Gibson missed about a quarter of this season with injuries, which have presented obstacles throughout his career, and spent the balance of it trying to master the preparation and commitment level it takes to be a No. 1 goalie capable of making 55 to 65 starts over an 82-game schedule. It was quite an adjustment from his days as a rookie who relied mainly on talent and swagger.

"He was a young lad and didn't know what an NHL goalie needs to do to prepare," Sudarshan said. "There's no question that there's been -- continues to be -- an improvement in that area."

That's not to say Gibson does not put in work, or is aloof. Troy Smith, who coached Gibson with the Ontario Hockey League's Kitchener Rangers, said that Gibson's remarkable athleticism was matched only by his hockey sense, and that he put in the hours in practice to improve.

"His work ethic is understated. I think it's a lot like his personality," Smith said. "He's not going to make a big deal about what he's doing, he's just going to go out and get the work done."

Gibson's athletic ability has drawn comparisons to Rinne's and to Gibson's crosstown rival, two-time Stanley Cup championJonathan Quick. Sudarshan said that the delicate process of balancing technique and structure with raw ability and intuition is ongoing. Late in games, as it has his entire career, Gibson's instincts have taken over.

In fact, Gibson's NHL career began with a trial by fire. Bruce Boudreau, then the Anaheim coach, gave him just three regular-season auditions in April 2014 for the role of No. 1. When the Ducks' dizzying goalie carousel stopped on Gibson, he seized the opportunity. With Anaheim facing a 2-1 deficit in its second-round series against the Los Angeles Kings, Gibson stepped between the pipes and coolly went on to win two huge games that gave the Ducks an edge in the series. Though they ultimately lost to the Kings in seven games, Gibson built on the reputation for clutch play he had earned at the 2013 World Junior Championships, where he was the fulcrum of Team USA's gold-medal machine.

"He was one of the biggest reasons we won the World Championships. He had tremendous confidence and he gave our team confidence," said Phil Housley, an assistant with Nashville who coached that American squad. "It's like water off a duck's back. He's very composed and laid back. But he's a tremendous competitor. I could see it back then."

The Ducks have needed Gibson's resilience and competitiveness to shrug off setbacks. They have made four multigoal comebacks in these playoffs, two of them from three-goal holes. And they erased deficits of 2-0 and 3-2 against Nashville in Game 2, a trend they would like to buck by jumping out to an early lead in Game 3 on Tuesday in Nashville.