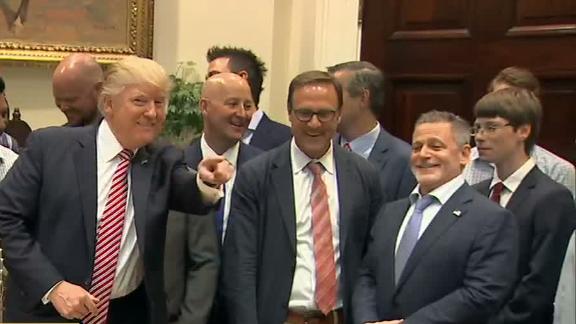 The Cleveland Cavaliers might have lost to the Golden State Warriors in the NBA Finals earlier this month, but Cavs owner Dan Gilbert was already back in the White House for a championship celebration Wednesday hosted by President Donald Trump.

The Chicago Cubs were being honored for their epic World Series comeback over the Cleveland Indians, but you wouldn't know it by the way Gilbert became the center of the proceedings.

Trump made a few brief remarks to the Cubs in front of the press corps before he called out the Cavs owner by name and extended an invitation to the team to join him for a tour of the Oval Office.

"Where's Dan? Where's Dan Gilbert?" Trump said as photographers snapped photos of the Cubs team standing next to the president and the Commissioner's Trophy in the Roosevelt Room. "He's right outside. Grab him. Where's Dan? Dan Gilbert just came in. He's from basketball. He's looking for a good basketball player. Anybody play basketball?"

As Gilbert made his way to the front of the room, someone cracked the joke, "It's tough for a guy from Cleveland," alluding to the Indians' loss to the Cubs.

Gilbert shouted back, "Yeah, we're looking for a couple guys."

Then the president commented on the Cavs' loss to the Warriors.

Once Gilbert joined the group in the front of the room, Trump turned to Cubs skipper Joe Maddon and said, "So, ask him, how is he doing with LeBron [James]?"

Gilbert appeared uncomfortable being put on the spot and said simply, "Things are good." Trump then called Gilbert "a great friend of mine, a huge supporter and a great guy."

A source close to Gilbert told ESPN that the Cavs owner, along with Jay Farner -- the CEO of his Detroit-based Quicken Loans company -- were at the White House to talk business with Trump and that the timing of the Cubs' visit was coincidental.

"Today we met with President Trump to update him and his team on the positive transformations that are taking place in Detroit and Cleveland," Gilbert said in a statement provided to ESPN. "We also informed the President of some of the existing challenges that remain, as well as opportunities to solve them through public/private cooperation and/or partnerships.

"We look forward to continuing the valuable dialogue to develop the best strategies to accelerate the progress in our midwest urban cores."

Quicken Loans donated $750,000 for Trump's inauguration in January, according to a public filing by Trump's inauguration committee. However, Gilbert made no personal campaign contribution to Trump. He did back Ohio Gov. John Kasich and New Jersey Gov. Chris Christie on the Republican ticket, however, and donated $75,000 to a fundraiser to benefit Clinton and other Democratic candidates.

James has taken a couple swipes at Trump since he has been in office. Asked about some questionable voting for the NBA All-Star Game in February, James shot back, "There's always goofy votes. Donald Trump is our president."

James was also against Trump's executive order to ban immigrants and refugees from seven countries with predominantly Muslim populations, telling The Hollywood Reporter in February, "I am not in favor of this policy or any policy that divides and excludes people. I stand with the many, many Americans who believe this does not represent what the United States is all about. And we should continue to speak out about it." 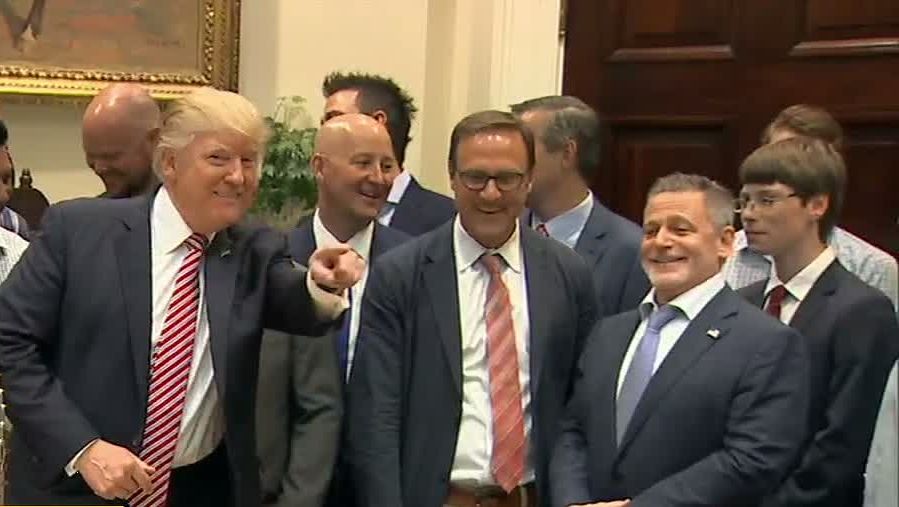