Chris Bosh: 'I will play basketball in the NBA' 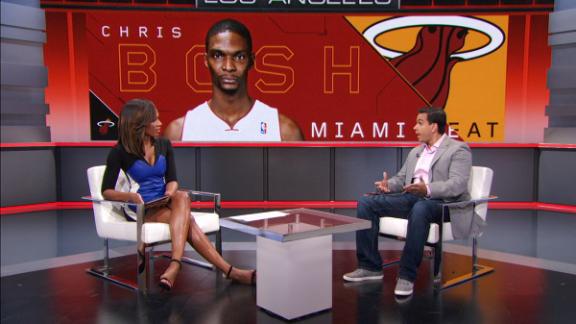 Chris Bosh said he's gone through treatment and workouts and is ready to rejoin the Miami Heat for the start of training camp in a podcast released Wednesday.

Bosh appeared on Open Run -- a part of the Uninterrupted digital media platform -- and discussed his situation for the first time this summer. He announced he's directing and producing a documentary series for Uninterrupted showing his recovery after being diagnosed in February with blood clots -- a condition that derailed him for a second consecutive season.

"Absolutely (ready for training camp)," Bosh said in the podcast. "We've been talking about it for a long time. We released a statement in May that as soon as I'm ready to play, as soon as possible, I'll play.

"I'm ready. I've done all my work working with the doctors. I'm in incredible shape. ... I look good when I take my shirt off."

Bosh has yet to be medically cleared by the team and has been working out -- away from the team -- in Los Angeles this summer. The Heat, who have not officially commented on Bosh's playing status since May when he was declared out for the season, did not immediately return messages from ESPN.

"It is my contractual and professional obligation to be there," Bosh said. "Will I be cleared? I don't know. But I will play basketball in the NBA. ... This has been a struggle. This has not been easy."

Bosh said a tweet from Heat owner Micky Arison on Aug. 31 is making him feel welcome at the Heat's training camp, which begins Sept. 27. The first episode of Bosh's documentary is scheduled to be released online Sept. 21.

"Especially with Micky Arison saying, 'I'll see you at camp.' I think it's moving forward," Bosh said. "I have no reason to believe it's not. We'll finish this."

Arison issued the tweet two days after Bosh released video footage of himself working out.

At issue is whether Heat-approved doctors would clear Bosh to play while on medication to prevent a recurrence of the blood clots. Bosh has developed clots in his calves each of the last two seasons. In 2015, the clot traveled to his lung and he had to be hospitalized.

Bosh and the Heat have been working at a distance with his condition since the spring. He released a statement from his public relations firm in March saying he no longer had deep vein thrombosis -- a blood clot -- and was "positive" he would be able to return before the end of the season. The Heat did not comment and Bosh did not play.

In May, the National Basketball Players Association released a statement saying it was trying to get all parties involved in a resolution, and the union requested a meeting with the Heat. After meeting the following day, the Heat released a statement saying Bosh was out for the season and would work with doctors to "return Chris to playing basketball as soon as possible."

In July, Heat president Pat Riley said the Heat were open to Bosh playing again but was unable to commit to it, saying it was "still a very fluid situation" and "on this day, there's not an answer."