Damian Lillard after loss: 'We have to play with some damn heart' 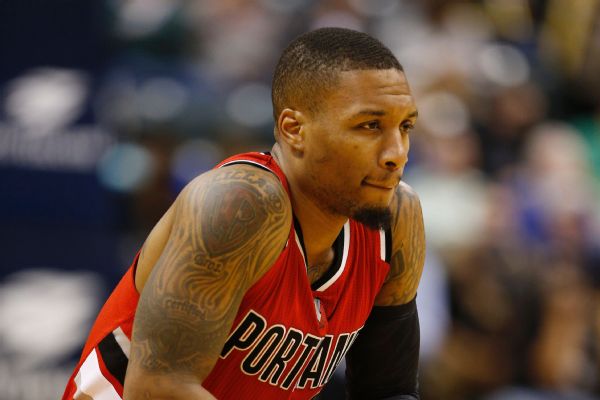 ESPN
By Chris Haynes
OAKLAND, Calif. -- At the conclusion of a 45-point thumping at the hands of the Golden State Warriors on Saturday evening, a livid Portland Trail Blazers All-Star addressed his teammates in the locker room.

Damian Lillard didn't mince words in criticizing his team, telling ESPN the Blazers' performance was "ridiculous" and that the team's recent slide "is on us," not the coaches.

"Man, it's OK to turn the ball over, it's OK to make mistakes, but we have to play with some damn heart and compete out there," he said of his teammates.

The Warriors secured a 135-90 win at Oracle Arena and shot 59 percent in the process. It was the largest margin of victory in the NBA this season, and it was the Warriors' largest ever over the Trail Blazers.

Portland has lost six of its past seven and is dead last in defensive efficiency (109.6).

Players were speechless. Lillard got dressed at his locker stall and routinely shook his head in disappointment. At 13-16, the Trail Blazers are only a game up on the Denver Nuggets for the eighth and final playoff spot in the Western Conference standings.

Several Trail Blazers players expressed afterward that they felt like they had disrespected the game.

"This is unacceptable, no matter who you're playing against, champions or not," C.J. McCollum told ESPN. "You have to be ready to play and perform and compete, and I don't think we did any of those things today."

"Honestly, there are really no words for it," Crabbe said to ESPN. "Our play is really self-explanatory right now. We've got to get it together. It was a 40-point loss. That's embarrassing right there."

Despite a flawed roster, Portland head coach Terry Stotts is doing his best to try to manufacture a nucleus capable of providing extended stretches of high-level defense. As for personnel, the Trail Blazers didn't improve from last season's squad that overachieved and went 44-38. The offseason addition of Evan Turner and his four-year, $70 million deal hasn't paid off.

Furthermore, the rim protection they so desperately need from Festus Ezeli is likely sidelined for the season, due to his knee injury. Swing forward Al-Farouq Aminu has been in and out the lineup with a back contusion, but he's not the answer for Stotts.

"This isn't about what the coaches are doing, this is on us," Lillard said to ESPN in retelling what he stated to his teammates. "We have to take responsibility for what's going on. This s--- is ridiculous. We've got the talent; we've just got to put it together consistently."

In the locker room after Saturday night's loss, Lillard's facial expressions spoke volumes, and he was in a rage with his team's effort. But he made it clear that his confidence hasn't wavered one bit.

Lillard has been critical of his team before. Last month, he told reporters, simply, that the Trail Blazers "kind of suck right now," following a blowout loss to the Houston Rockets, though he added, "We'll get it right, and things will be fine."

The Trail Blazers have had a couple of heart-to-heart discussions after some disappointing losses this season, but not to the extent of categorizing them as players-only meetings.

If this sort of play continues, that might change.

"I think we're getting close to that point," McCollum told ESPN. "Dame talked to the guys today, but it's more about us as players. And the coaches, they're not playing. They're not responsible for losing by 40 or winning by 40. It's the players' job. It's not [San Antonio Spurs coach] Gregg Popovich, it's not [Cleveland Cavaliers coach] Tyronn Lue, it's the players making the decisions, like Kawhi Leonard andLeBron [James]. They're the guys that change the culture of the team, and they change the impact of the game."

"I feel like guys are speaking out more about how our play is unacceptable and how we have to step up more, so I mean a [players-only meeting] may come, may happen soon," Crabbe said. "It's going to come to a point where everybody is going to be fed up with it. We're pretty fed up with it now. I mean, it's frustrating going to games and just getting beat like this and not even giving ourselves a chance. We've got to figure it out."

On whether the Trail Blazers have reached their lowest point of the young season, McCollum told ESPN, "S---, we lost by 40 today. It doesn't get no lower than that."