David Price gets Game 5 call, but expect a team effort from Red Sox 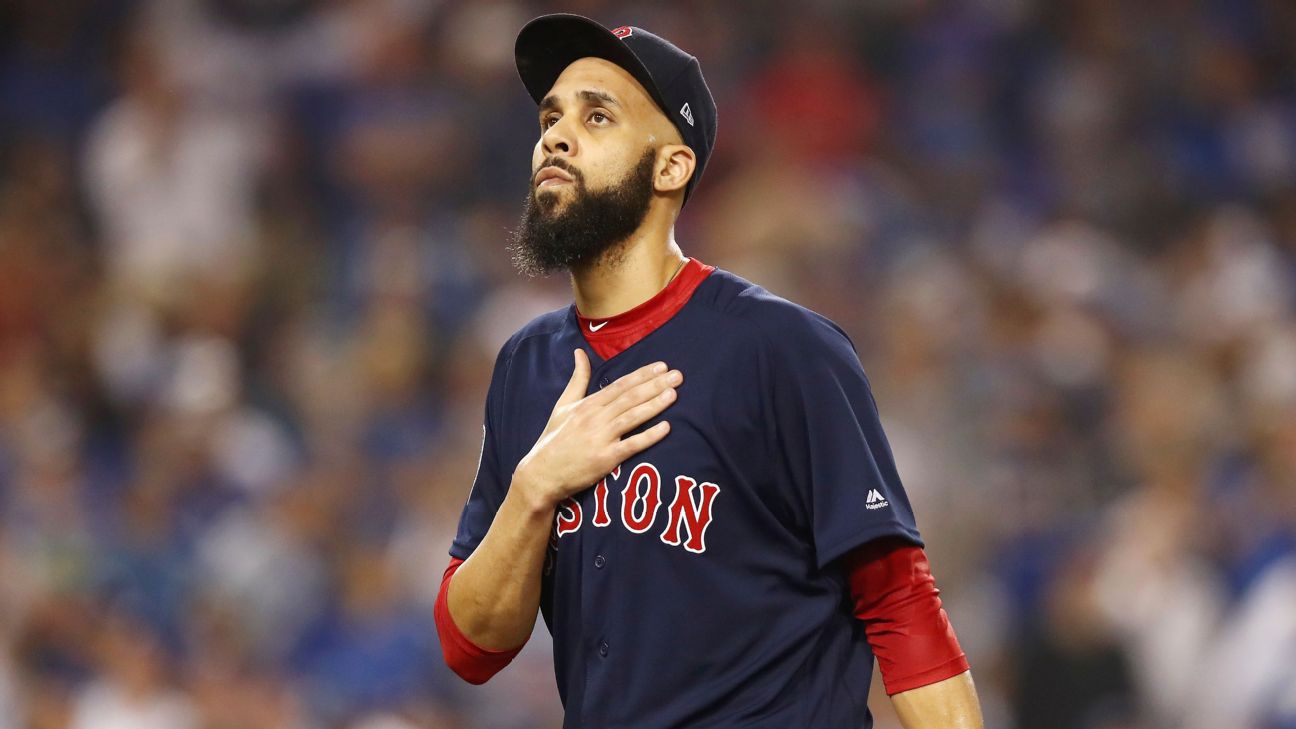 LOS ANGELES -- Twenty-two days ago, David Price was booed off the mound at Fenway Park. He had lasted just 10 batters in his start against the Yankees in the American League Division Series, served up two home runs and departed in the second inning as displeased fans reminded of his record in the postseason. It fell to 0-9 when the Red Sox lost that game.

In a late-night twist following Boston's remarkable comeback over the final three innings to beat the Dodgers in Game 4, manager Alex Cora closed his postgame news conference with a surprise announcement: Price, and not Chris Sale, will start Game 5.

"We talked about it before the game and this is a good spot for David, in a National League park, to start a game," Cora said. "Obviously he's been throwing the ball well. It's not that we're playing with the lead, but we feel that for the team, for where we're at pitching-wise, it's good to go with David."

The explanation feels a little insufficient, especially since it means starting Price on three days' rest -- not including his 13-pitch relief appearance in Game 3 -- instead of Sale on a regular four days' rest. But we also know enough about some stuff that is going on to speculate that Boston's decision is likely related to the health of Sale's left shoulder. His velocity has been down, his command has been off, they don't want him swinging the bat, his ability to pitch deep into the game is probably limited, he had the stomach illness, an extra couple days of rest wouldn't be the worst of ideas.

That doesn't mean Game 5 will be all about Price trying to earn his place in Red Sox lore alongside Dave Roberts' steal or the bloody sock or Big Papi's heroics. If we've learned anything about this Red Sox roster, it's that it's 25 guys contributing -- OK, 24, since we're still waiting for Drew Pomeranz to make an appearance -- and Cora has weaved his way through his pitching staff like Maradona attacking the England defense in the 1986 World Cup.

Even though Cora said Sale would still start Game 6 if the series goes back to Boston, he later added that Sale could be available in relief in the right situation -- likely meaning if they're ahead with a chance to close it out, especially given Craig Kimbrel's potential limited availability after throwing 56 the past two games.

If he does use Sale and then weird stuff happens anyway and the Dodgers survive, Cora still has options for Games 6 and 7. Game 3 starter Rick Porcello could start Game 6 on three days' rest after throwing just 61 pitches. That would line up Nathan Eovaldi to start Game 7 if necessary after throwing 97 pitches in Friday's marathon.

But Cora is focused on winning Game 5. He has repeatedly said the point of the postseason is to win today and then worry about tomorrow. With the 18-inning game, the bullpen has been used pretty extensively the past two days -- which is why Sale is a potential relief option. The pitch counts for the Boston relievers the past two days:

Heck, even Porcello is an option. Along with Price and Sale, he had even gone to Cora before Game 4 and volunteered to start. Sale had lobbied to get into Game 3 as a position player as Eduardo Nunez hobbled after a series of tumbles and crashes.

Sure, it's a cliché narrative this time of the year, but the Red Sox are all in this together. Cora held a quick team meeting after the 18-inning game and the team responded by giving Eovaldi a standing ovation. Price rode with Eovaldi on the team bus back to the hotel.

"Every single game and every single night someone else steps up," Kelly said after the Game 4 win. "It's been our mantra the whole entire season."

Indeed, the team put up nine late runs even though Mookie Betts and J.D. Martinez went a combined 0-for-8. In fact, until Pearce's home run off Kenley Jansentied the game, the No. 1 through 4 hitters had been a combined 0-for-41 in Los Angeles. Before Pearce's home run, Mitch Moreland smacked the big three-run homer off Ryan Madson. Moreland hadn't homered since Aug. 22 -- 78 at-bats ago.

"We don't rely on two guys," Cora reiterated after Game 4. "Brock (Holt) did a good job. Steve, he was amazing, Mitch with a big swing. We kept putting up good at-bats."

As usual, everything Cora does seems to work. His only obvious questionable decision during this postseason was leaving Eduardo Rodriguez in too long on Saturday. Cora admitted he pushed him too far. Otherwise: Every moves turns to gold. Earlier this postseason, I asked Cora about Boston's decision to carry 11 pitches all postseason when the other three teams were carrying 12. He cited one reason was that by carrying Blake Swihart as a third catcher it allowed them to pinch-hit for their other catchers.

Well, in Game 4, he hit for both catchers. The first time came in the seventh with Jackie Bradley Jr., but he still had Moreland to hit for the pitcher. In the ninth, with the game tied, Rafael Devers hit for Sandy Leon and drove in the go-ahead run. Swihart then caught the bottom of the ninth.

Cora isn't about to take credit for all this.

"It's all about the players," he said the other day. "They're talented. We got information, we put them in spots that we feel that they're going to be successful. But in the end they're the ones that hit homers and make plays and actually they make managers look good, that's it."

The Red Sox have made Cora look like a genius: They're 10-3 in October. They need one more win. You have to think Betts and Martinez are due to do damage. Price is now going for his third straight postseason win as a starter.

The narrative is pointing to the Red Sox.

Of course, there's a story on the other side as well ... and Clayton Kershaw is starting, with the season on the line. Enjoy the game. 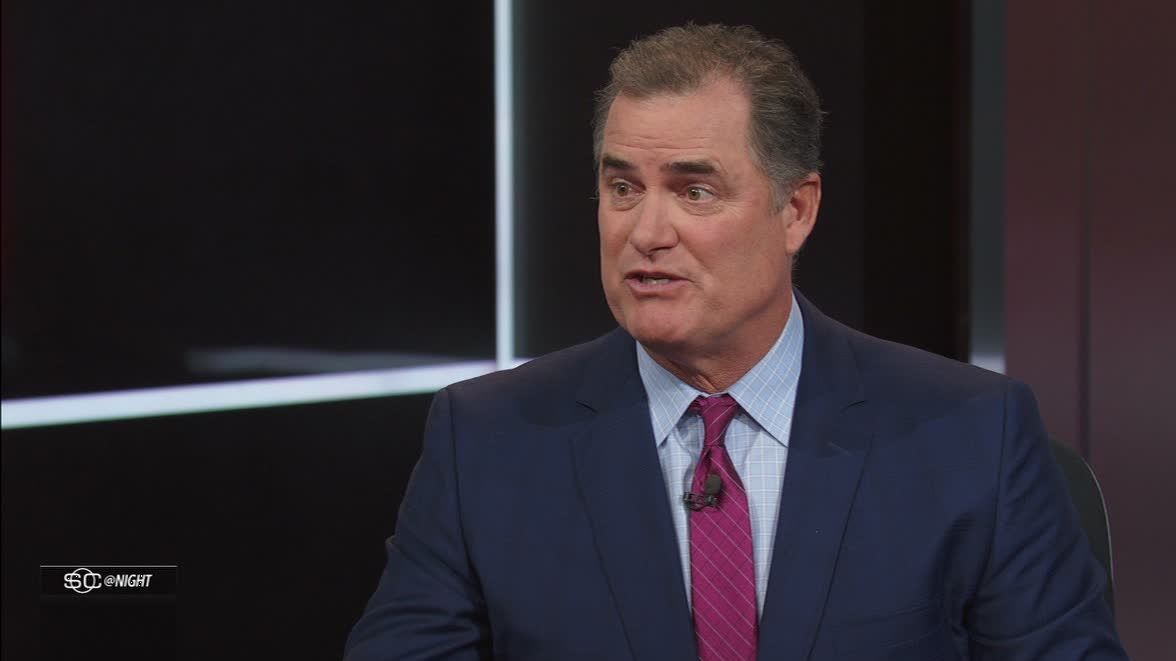