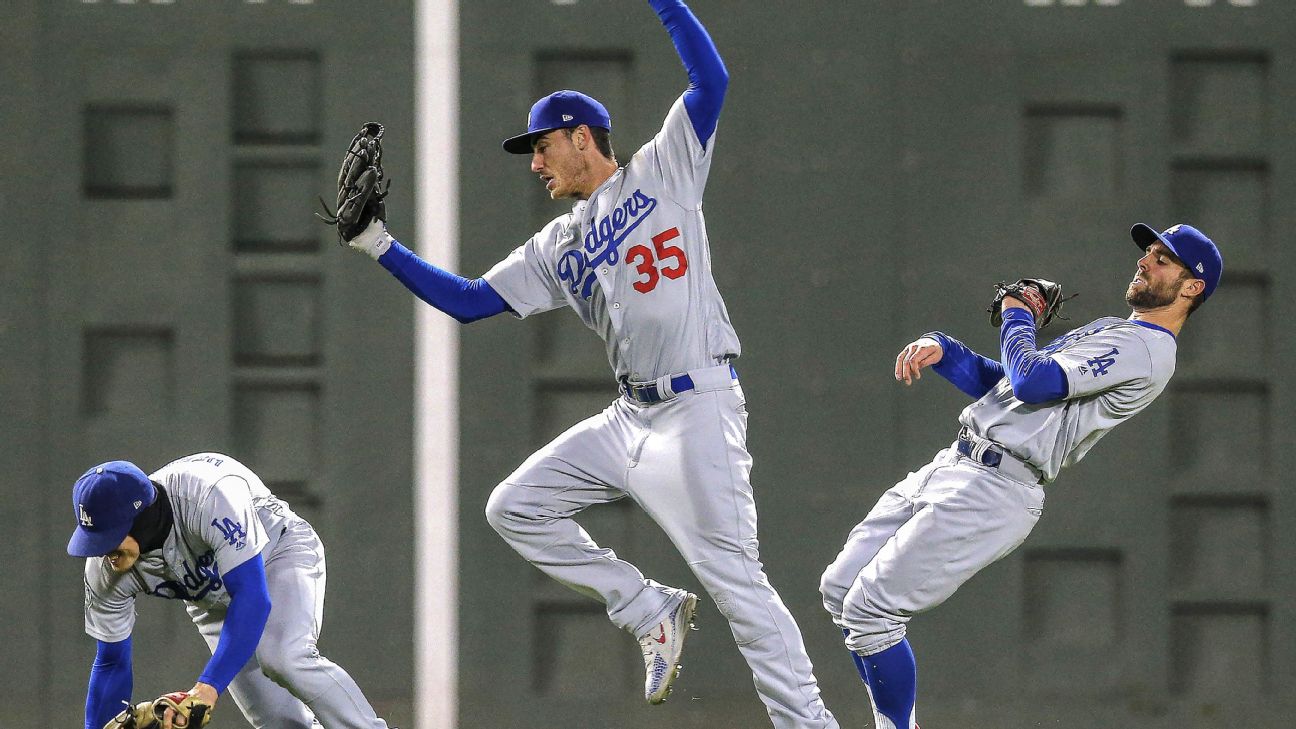 LOS ANGELES -- Two staples of the Los Angeles Dodgers' analytical approach faced heavy scrutiny in the wake of a second consecutive World Series defeat. But Farhan Zaidi, who just finished his fourth season as the team's general manager, actually gained validation from the team that beat him.

One was the Dodgers' heavy reliance on platoons, which, given the value of everyday plate appearances, might lend itself to offensive inconsistency.

"The World Series MVP was a guy who matched up some and platooned some this year," Zaidi said, referencing right-handed-hitting Boston Red Sox first baseman Steve Pearce.

The other was their general unwillingness to spend on non-closers, which left the Dodgers with undistinguished relievers in high-leverage situations.

"Looking across the way to the World Series, at the Red Sox pen -- when it wasn't the starters throwing -- it was Matt Barnes and Joe Kelly and Ryan Brasier," Zaidi said. "That wasn't a group of guys that they threw a lot of money at."

Zaidi and Andrew Friedman, the Dodgers' president of baseball operations, expressed disappointment in failing to deliver the franchise's first World Series championship in 30 years. But they pushed back on the narrative that once again losing in the final round highlighted any sort of internal failure.

Asked how much blame the front office shouldered, Zaidi began his answer by saying, "That's accepting your premise that there's blame to be given."

Sometimes, as might have been the case with the Dodgers, the sample size is too small and the other team is too good.

Clayton Kershaw hinted at that, moments after his season ended, when asked what the Dodgers could change in order to clear the final hurdle.

"It might not be a personnel thing," he said. "It might just be a 'play better' thing."

In Game 1, the Dodgers were uncharacteristically horrific defensively. In Game 2, a bases-loaded walk and single allowed by Ryan Madson made the difference. Game 4 swung on miscommunication between Dodgers manager Dave Roberts and his starter, Rich Hill, which led to Hill being removed too early. Game 5 swung on three mistake pitches by Kershaw, which led to three home runs in seven innings.

Throughout, the Dodgers batted .180/.249/.302, an offensive futility that, as Friedman said, "made things that much more difficult."

The Dodgers might look different next year, but there won't be a shift in philosophy.

Perhaps they make a real run at Bryce Harper, a slight possibility only because he's 26 years old and the Dodgers are back under the luxury-tax threshold. Either way, they will continue to use their unmatched position-player depth to match up, which means they will continue to field vastly different lineups depending on whether the opposing starter throws right-handed or left-handed.

There's thought that fielding too many platoons leads to fluctuating offenses because too many players are out of rhythm. The Dodgers don't see that as an issue.

"Up and down our lineup, our guys got to play a lot," Friedman said. "Everyone got to have a role, and a hand, in our success, and probably got more opportunities than guys 9 through 13 get on other teams. It helps that our 9 through 13 were very talented, capable players, but I think as far as contributions and kind of having a hand in our success, I think it extended pretty deep."

The Dodgers also won't be shelling out significant dollars for relief pitching, regardless of how much trouble their bullpen gave them. The Colorado Rockies did that last offseason, committing a combined $106 million to Wade Davis, Bryan Shaw and Jake McGee. But Davis (4.13 ERA), Shaw (5.93 ERA) and McGee (6.49 ERA) all struggled, validating what has become dogma in the Dodgers' front office.

"You look back over time at free-agent relievers, and it's not a very good track record," Friedman said. "So, we're not going to do it just to win a headline on that day."

"Elite relievers come from everywhere," Zaidi added, "and that's our responsibility, to be resourceful and try to find those guys. The solution isn't always, and is often not, just going out and trying to spend money. Sometimes the best relievers come from thinking more creatively about guys who can do that job."

As an executive with the cash-strapped Tampa Bay Rays, Friedman would often root for other clubs to sign high-priced free agents because he knew it would cripple them long term. He brought that same logic to the affluent Dodgers and vowed not to let deeper resources trigger impracticality.

The Dodgers have agreed on a three-year extension with Kershaw, have re-signed right-handed-hitting corner infielder David Freese and have extended qualifying offers to starting pitcher Hyun-Jin Ryu and starting catcher Yasmani Grandal. Soon, Roberts and all of his coaches -- minus third-base coach Chris Woodward, who will now manage the Texas Rangers -- will have new contracts too.

Friedman and Zaidi could sit out the rest of this offseason and still field a powerhouse next year.

Aside from Kershaw, the Dodgers have six starting pitchers in the fold, a list that includes Hill, Walker Buehler, Alex Wood, Kenta Maeda, Ross Stripling and Julio Urias. Aside from closer Kenley Jansen, they have two trusted right-handers (Pedro Baez and Dylan Floro) and two trusted left-handers (Scott Alexander and Caleb Ferguson) in their bullpen.

The Dodgers will tinker, perhaps even more than that -- but their World Series loss won't trigger an overhaul.

"We felt like we had a really talented roster," Friedman said. "We felt like the Red Sox also had a very talented roster. And just because something plays out in a five-game series -- which, it's unfortunate you only get one chance to do it -- doesn't mean that if you played another seven-game series it would play out the exact same way. Unfortunately, we don't get that opportunity. But it does help in thinking through things as you look forward."
Report a correction or typo
Related topics:
sportsespnfall classicworld seriesmlbfree agencyfarhan zaidiandrew friedmanoffseasonlos angeles dodgersfree agent
Copyright © 2020 ESPN Internet Ventures. All rights reserved.
More Videos
From CNN Newsource affiliates
TOP STORIES