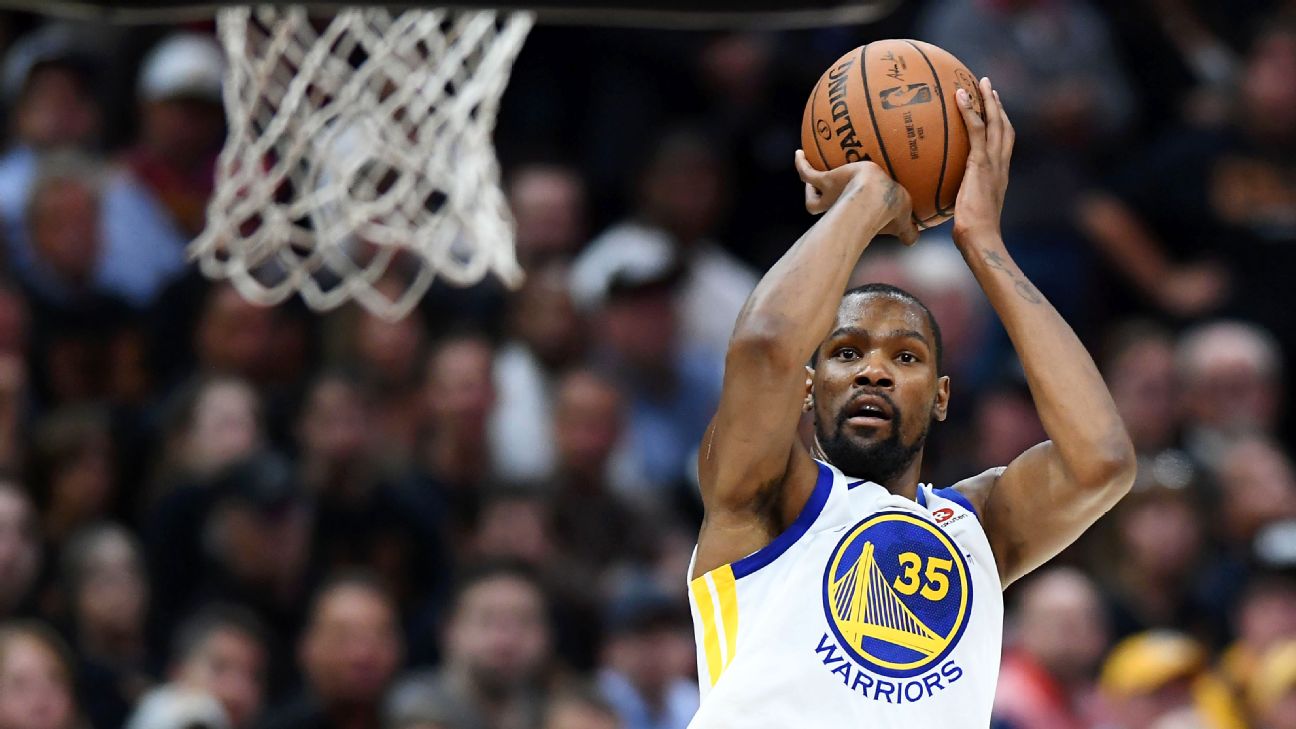 ESPN
By Kevin Arnovitz
CLEVELAND -- After a season of uncharacteristic inconsistency and injuries to key members of their core, the Golden State Warriors are now one win away from their third championship in four years after defeating the Cleveland Cavaliers 110-102 in Game 3 of the NBA Finals. With the win, the Warriors take a commanding 3-0 lead in the best-of-seven series.

There are nights when the Warriors win by the grace of their fluid offensive scheme, and others when they rely on the singular exploits of Kevin Durant.

Game 3 was an exhibition of the latter for the Warriors, with their trademark third-quarter spurt. They compensated for a miserable night from Stephen Curry with a virtuoso performance from Durant, who delivered the dagger with 49.8 seconds left -- a 33-foot 3-point shot off the dribble to give the Warriors a 106-100 lead.

Coming off a Game 2 in which he attacked, distributed and performed yeoman's work defensively on LeBron James while Curry dazzled from distance, Durant moved front and center in the Warriors' offense. The Cavaliers opted to trap Curry from the opening tip, and the Warriors countered by working the ball into Durant at the midpost and letting him go to work one-on-one.

And when he wasn't carving up the Cavs in the half court, Durant exacted plenty of damage from long range and as a passer when the Cavs sent aggressive help. In sum, he scored a game-high 43 points on 15-of-23 shooting from the field (including 6-of-9 from beyond the 3-point line), and collected 13 rebounds -- and every single one for the Warriors in the first quarter.

For Curry and sharpshooter Klay Thompson, Game 3 was a nightmare, at least until the final moments. Curry never established a rhythm against the intensified Cleveland pressure. He converted only three of his 16 attempts from the field -- and one of 10 in 3-pointers -- for 11 total points, and unlike Games 1 and 2, wasn't terribly effective attacking off the bounce. Thompson struggled as well, though he came alive for a couple of key buckets in the third quarter. He notched 10 points on 4-for-11 shooting.

But with the outcome in the balance, Curry drained two crucial attempts in the closing three minutes -- a stumbling layup and an enormous unguarded 3-pointer -- as well as a dish to a cutting Draymond Green to polish off the Cavs with 25 seconds left.

Though the Warriors enjoyed a third-quarter surge in which they reversed a six-point halftime deficit, the Cavaliers managed to withstand the run, as the teams alternated leads in the fourth quarter.

For the first time in the NBA Finals, the Warriors had their Hamptons Five (nee "death lineup") at their disposal, as Andre Iguodala returned to action for the first time since the Western Conference finals. That lineup extended a razor-thin one-point lead with 7:34 left in the fourth quarter to cruise for the win.

The much-maligned supporting cast for Cleveland made meaningful contributions Wednesday night. In addition to James' typical dominance as both scorer and facilitator, Kevin Love turned in one of his finest Finals efforts during the Cavs' four-year run, pacing Cleveland before halftime.

The Cavs' big man, who has been targeted defensively by the Warriors over the course of the rivalry, was relentless in the first half. He scored 20 points on 6-of-13 shooting from the field, including a 3-of-7 night from beyond the arc, even demanding double-teams from Golden State.

Love controlled the glass, gobbling up 10 boards in the first half alone and finished with 13 rebounds, and cleverly moved off the ball to find ample opportunities as a pressure release valve as the Warriors' defenders converged in the paint.

The Cavs finally got production from a mystery guest -- Rodney Hood, who was dusted off for his first meaningful minutes since early in the Eastern Conference finals. Hood finally showed glimpses of the southpaw playmaking guard who can create shots for himself off the dribble.

He finished with 15 points on 7-for-11 shooting in 26 minutes. But as Cavs coach Tyronn Lue replied in deadpan fashion before the game when asked who would be the night's key player, the answer -- as it usually is -- was James.

On a night when he received sufficient support from his teammates, James was still the fulcrum of the Cavs' offense, as well as the Warriors' defensive game plan. His "off night" amounted to a triple-double: 33 points, 11 assists and 10 rebounds on 13-of-28 shooting from the field -- and one thrilling self alley-oop in the first quarter.

For the Cavs, even on their home court, it wasn't enough. And the Warriors, despite the talk of complacency throughout the spring, are a mere one win away from a summer of content.

KD puts Dubs on his back with epic 43-point game
Kevin Durant torches the Cavs in Game 3, hitting the dagger, part of a playoff career-high 43-point performance.

KD drills cold-blooded deep 3
Kevin Durant drills a clutch 3-pointer with under a minute left to give him a playoff career-high 43 points.

Durant on dagger: 'Felt good leaving my hands'
Kevin Durant expresses his thoughts on knocking down the clutch 3-pointer in the fourth quarter and the importance of Andre Iguodala's presence on the court.