Eighty-three questions and counting: When will 49ers' Trey Lance be ready to start? 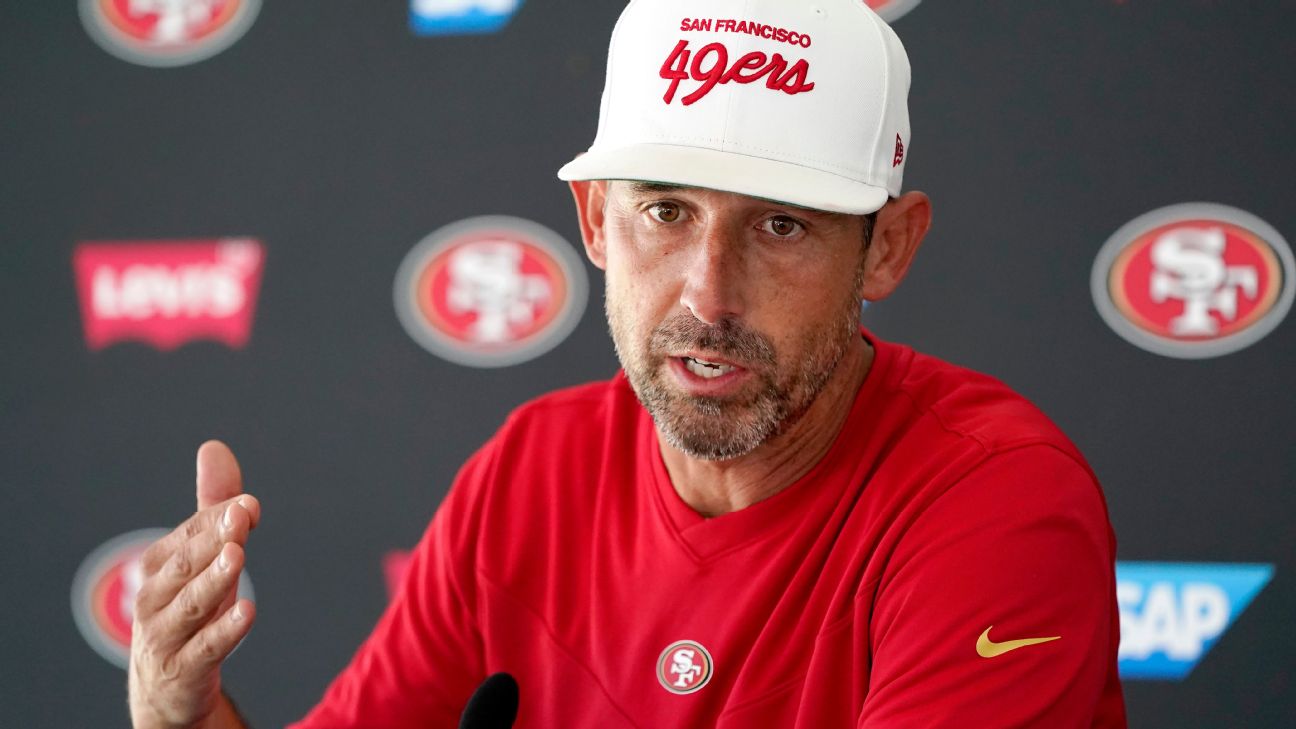 SANTA CLARA, Calif. -- From the time the San Francisco 49ers reported for training camp on July 27, coach Kyle Shanahan has appeared in front of the media 14 times. In almost all of those sessions, most of the questions have centered on one subject: rookie quarterback Trey Lance.

Shanahan has patiently answered all 83 Lance-related questions to the extent he's willing to share and has showed no signs of frustration with the constant barrage.


But there remains one question Shanahan hasn't given much of an answer to, and it's the one that matters most: How will he know when Lance is ready to start?

"When I think he gives us the best chance to win," Shanahan said.

How does Shanahan determine that?

"I don't know," Shanahan said. "I haven't really defined that for myself either. Just when I think it feels right, when he seems ready, when I think the team seems ready."

For coaches attempting to thread the needle with an established veteran quarterback and a talented rookie, there's no handbook on how to make the decision. There's a certain amount of guesswork, particularly when it comes to an unknown commodity.

It's especially true for Lance, who is making the leap from FCS power North Dakota State to one of the highest-profile positions in sports. He arrived as the No. 3 pick in April's draft with 17 college games which included 318 passing attempts.

All of which is why Shanahan has spent this camp sticking to Jimmy Garoppolo as the starter with Lance as the backup, occasionally sprinkling in some reps with the starters for Lance in preparation for him to play situationally.

Through it all, Shanahan has remained relaxed about the endless quarterback questions, largely because for the first time during his time with the 49ers he feels good about his depth at the game's most important position.

"I can't get caught up in everything else," Shanahan said. "I get why it's fun and that's a decision that everyone interested in. I can't make it about that. I'm just really excited that, I think we've always had a quarterback like Jimmy who can give you the chance to win the Super Bowl. And when he hasn't been in, we've really struggled. And I also think the drafted a guy who can get there also. And yeah, that makes me very excited. However that plays out, whatever gives us the best chance to win, is definitely what I'm trying to focus on."

Lance's time will come, but for a coach like Shanahan, there's a lot to consider before getting to that point. Take it from the likes of coaches such as Sean McDermott and Doug Pederson, both of whom had to figure out when to turn to highly drafted quarterbacks in recent years.

'A strange deal' for Carson Wentz

Sometimes, situations such as the one the 49ers are in have a way of working themselves out.

In 2016, the Philadelphia Eagles used the No. 2 pick on Carson Wentz-- another big, physically gifted quarterback out of North Dakota State. They also had an accomplished veteran in Sam Bradford, whom they had traded for the year before.

Wentz was undoubtedly the future, but the initial plan was for Bradford to be the present while Wentz adjusted to the NFL. In their first training camp together, then Pederson did something the Niners haven't done so far with Garoppolo and Lance: split the reps with his two quarterbacks, allowing Wentz plenty of opportunities with the starters.


The goal was to get Wentz up to speed, but to taper his reps toward the end of camp so Bradford could get the bulk of the work as the season neared.

As that camp went on, however, Wentz continued to impress Pederson and the coaching staff with how he carried himself and how quickly he adapted to the offense.

"The way he came in and handled his business from the way he studied our playbook, how he handled media, how he practiced, how he handled the team," Pederson said. "He kind of stepped in as a veteran guy even though he was a rookie who had never taken an NFL snap. So, honestly, you hope they're ready because once the lights come on, it's football and they go perform, and that's why you draft those guys."

Looking back, Pederson described a rookie Wentz in similar terms to what you now hear about Lance. North Dakota State had put so much on Wentz's plate as the starter that he was up to speed early on many of the operational things that can be hard for young quarterbacks.

Wentz was good enough in camp he might have overtaken Bradford before the season began. As it turned out, he didn't need to.

On Aug. 30, 2016, Minnesota Vikings quarterback Teddy Bridgewater suffered a torn ACL and other structural damage in his left knee, ending his season early and leaving a team that believed it could contend desperate for a starting quarterback.

Enter the Eagles, who had seen enough from Wentz to feel comfortable moving Bradford. They received first- and fourth-round selections in the 2017 NFL draft for Bradford.

Those Eagles went 7-9 in 2016, but the experience for Wentz and the addition of valuable draft capital played a role in what happened in 2017. They surged to 13-3 and won Super Bowl LII.

"That was just a strange deal because of the way things happened for us at the end of camp, with us moving Sam to Minnesota and Carson stepping in there," Pederson said. "But he was ready, he was prepared and he took the bull by the horns."

The 'vision' for Josh Allen

Two years after Wentz went No. 2 to the Eagles, the Buffalo Bills moved up to No. 7 in the draft to take Wyoming's Josh Allen. Draft analysts considered Allen one of the most physically gifted quarterbacks they'd seen in years. Like with Lance, there were questions about his accuracy and college competition level.
Upon his arrival in Buffalo, Allen wasn't handed the starting job, jumping into a competition with the likes ofAJ McCarronand Nathan Peterman. Like Shanahan now, McDermott entered training camp with no preconceived notions of who would win the job.

The goal was to get Allen ready as quickly as possible but not force the issue, knowing that it might take him some time to become the best version of himself.


"It comes back to the vision of how you see that guy the first year," McDermott said. "It's really, what is the goal the first year? And you kind of work backward from there."

Allen had a solid (if unspectacular) preseason, and the Bills ultimately traded McCarron and went with Peterman as the starter. Peterman struggled so much in the opener Allen entered in the middle of a 47-3 loss. He made his first start the next week as McDermott committed to going through the bumps and bruises knowing that it would help Allen in the long run.

In other words, it's something that didn't happen overnight. McDermott said the credit for Allen's improvement in terms of accuracy goes to Allen for being willing to put in the work with a personal quarterback coach such as Jordan Palmer in the offseason.

"Really, he just continues to grow, which I've been very happy with," McDermott said. "He knows the areas he needs to get better at. Josh puts in so much time away from us, and credit to him and credit to Jordan. We stay in touch with that, which is important to us, too."

To this point, the Niners have remained steadfast in their desire to hold onto Garoppolo and let Lance develop at his own pace. They budgeted for Garoppolo's contract and did their best to allow Lance and him to foster a relationship on their own.

"You just have got to have a good plan," said Bears coach Matt Nagy, who is dealing with a similar situation now with rookie Justin Fields and veteran Andy Dalton and back in 2017 when he was Kansas City's offensive coordinator with veteranAlex Smith and rookiePatrick Mahomes. "That takes communication, just talking through it and making sure everybody understands what it is. You don't hide anything. You're open with it. And I think that's what all the teams are probably going to do in these situations. That's what we did [in Kansas City]."

Indeed, Shanahan and his staff have followed through on their plan, which has been a key reason their quarterback quandary hasn't turned into a quarterback controversy.

At some point soon, a decision will have to be made.

No matter how it happens, the right time for Lance will be defined by Shanahan.

"Every situation is different," Pederson said. "Kyle has obviously been in San Francisco; he's an established head coach now. He's won a lot of games and he's got great quarterbacks. They'll know when the time is right for Trey to play." 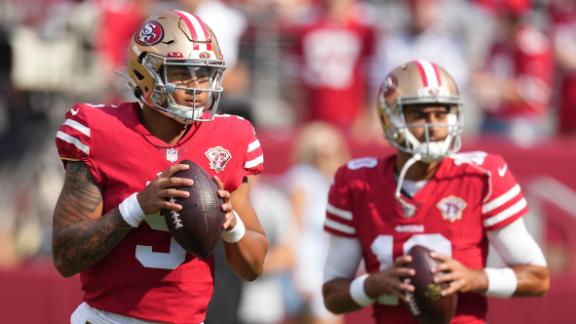