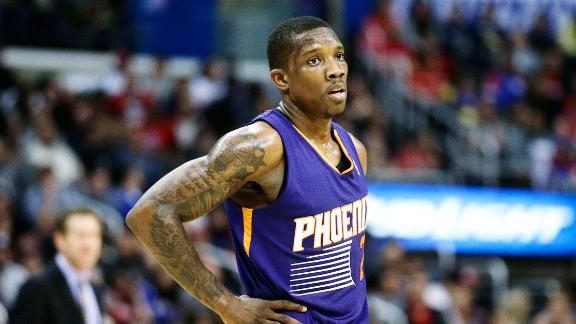 The deal was a culmination of months of talks and stalemates between the sides that ultimately resulted in Bledsoe getting the largest deal of any restricted free agent this offseason.

It represents a relief for both sides as the Suns are able to lock up one of their franchise cornerstones for the long term and Bledsoe gets security after his best season as a pro, averaging 17.7 points and 5.5 assists per game in his first season in Phoenix.

"All summer, I knew that I really would be most comfortable coming back to Phoenix because of the great fans, my Suns teammates and our coaches," Bledsoe said in a statement released by the team. "I am very happy it was able to work out this way."

Bledsoe had planned to sign a one-year qualifying offer worth $3.7 million with the Suns at the end of this week had a deal not been reached so he could be an unrestricted free agent next year.

"I learned long ago that it doesn't matter how stormy the sea is as long as the ship comes in, and today we are thrilled that the ship has come in and Eric will remain a Sun for a long time," Suns president of basketball operations Lon Babby said in a statement. "He will be an integral part not only of our basketball team, but our Phoenix community."

Movement on talks happened after the Minnesota Timberwolves made a final aggressive bid for Bledsoe when they attempted to reach a sign-and-trade deal with Phoenix last week.

The Wolves were prepared to give Bledsoe a four-year deal worth more than $60 million in such a trade, which strengthened Bledsoe's position that he would be a commodity in the market next year.

"Lon, Ryan and the Suns have shown confidence in me, and I am looking to take that responsibility and help our team get better from last year and position ourselves to win an NBA championship," Bledsoe said. "It's why I came back to Phoenix.

There has been some concern about Bledsoe's history of knee problems, which includes a torn meniscus last season that required surgery. The Suns, who are known for having one of the best training staffs in the league, offered Bledsoe a four-year deal at the start of free agency in July.

The disagreement was always over dollars, as the Suns opened with an offer of $12 million per season. Bledsoe ended up agreeing to a deal worth an average of $14 million per year.

"We are thrilled Eric Bledsoe will be in a Phoenix Suns uniform for years to come," general manager Ryan McDonough said. "Eric is one the most exciting and dynamic two-way players in the league. He played very well for us on both ends of the floor last season and we feel he is well on his way to establishing himself as one of the elite players in the NBA."

With Bledsoe re-signed, the Suns will have one of the deepest backcourt rotations in the NBA with standout Goran Dragic, free-agent addition Isaiah Thomas and recent draft picks Archie Goodwin and Tyler Ennis.

Partnering with Dragic under a system installed by new coach Jeff Hornacek, Bledsoe helped the Suns to 48 wins last season after they won 25 in the 2012-13 season.