How Cody Bellinger could have the best season in MLB history 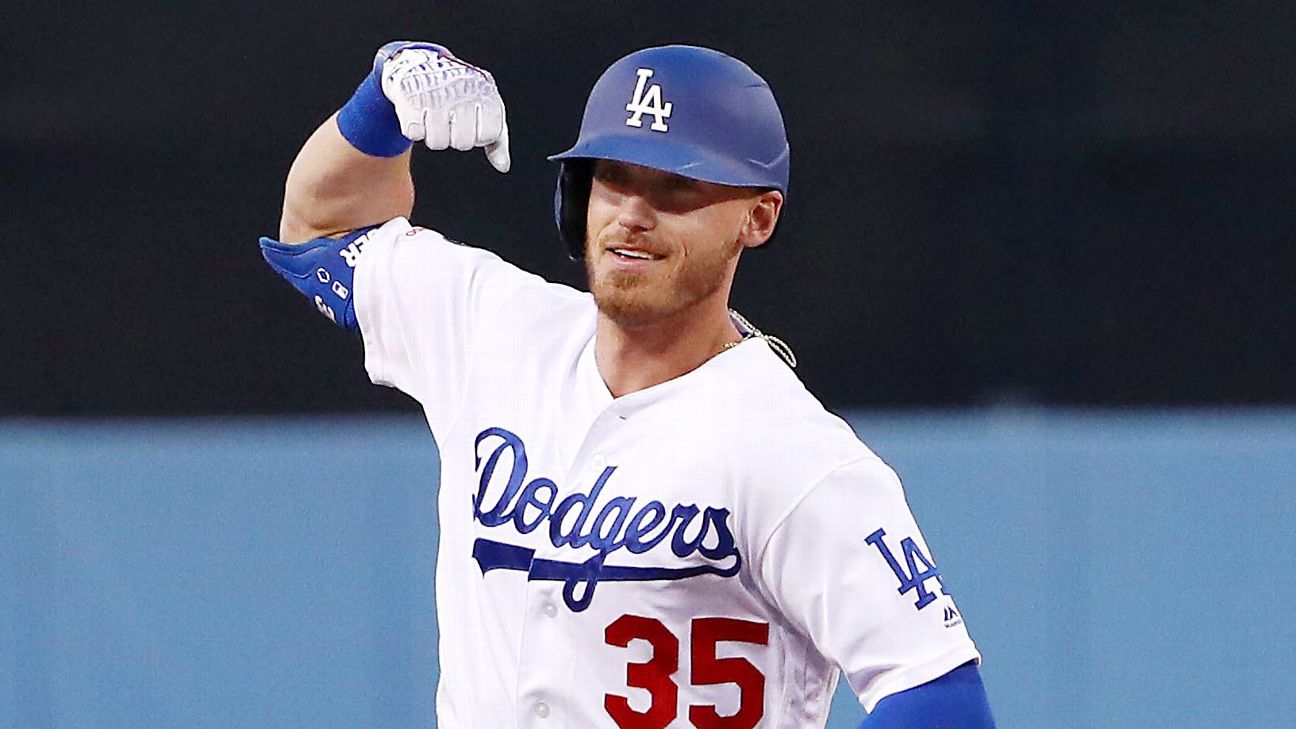 For the first two weeks of the baseball season, WAR goes dark. Baseball-Reference.com didn't roll out the first run of its all-encompassing stat until the morning of April 9, by which point theLos Angeles Dodgers' Cody Bellinger was hitting .435, slugging .978 and on pace to hit 103 home runs and produce 20 wins above replacement.

All of those would be records, but, of course, paces like that never hold. Bellinger's home run pace fell behind 73 on the last day of April, his slugging percentage fell below .863 in early May, and his batting average dipped below .400 --almost certainly for good--last week. Yet one pace holds: More than a third of the way through the season, the third-year outfielder has 5.4 WAR, in 55 team games, on track for about 16.0. The single-season record is 14.1, by Babe Ruth in 1923.

This pace, too, likely cannot hold. But it's a rare occurrence when we can see, over such an extended period, what the greatest season of all time would even look like. This is what it looks like:

In his first at-bat against theMilwaukee Brewers, he fell behind 0-2 and then singled to drive in a run. In the second, he fell behind 1-2 and singled again, driving in another run. He then struck out looking and drew a walk, and in the eighth inning he robbed Christian Yelich of a home run. "Is there anything he can't do?" one of the game's broadcasters screamed.

Last year, there was. Bellinger struggled against lefties enough that he ended up in a platoon. (Most Dodgers were in platoons. It was a very deep roster.) But this year, he has hit .343/.438/.701 against lefties, the best left-on-left line in baseball, better than all but nine right-handed hitters. With the game on the line, he was facingJosh Hader, who has been tougher on lefties over the past couple of years than any other pitcher in baseball.

Hader got ahead and threw Bellinger a 1-2 slider. It was down the middle, and it's easy to say that Hader missed his location. But Bellinger used to swing and miss a lot, even on pitches down the middle. In his first two years, he whiffed on about 25 percent of middle-middle pitches. This year: 11 percent.

Even Hader's mistakes are difficult to hit, especially for lefties. As Bellinger swung, his hips cleared early and he hooked the ball deep and over the right-field wall for a home run, giving the Dodgers the lead and the win.

He finished the game with 2.7 WAR.

Bellinger hit a sacrifice fly in the first, then batted with one out and nobody on in the fourth. The Pirates' Trevor Williams got ahead 1-2, then threw a slider that was clearly below the bottom of the strike zone -- a called strike less than 1 percent of the time, according to ESPN Stats & Info. If you freeze the action a split-second before bat hits ball, Bellinger looks like he's just trying to make contact, a game of pepper, his back leg folding down:

But the image is misleading. His hands are actually screaming toward the ball, trying to get the bat under it like a lob wedge. He gets there, and his high, deep fly ball again lands over the wall for a homer.

Bellinger's ability to do damage this year can be traced to ... well, to almost everything. But one especially striking point is this:

On pitches out of the zone, he's hitting .320 and slugging .460. (This includes strikeouts.) It's even better to not swing at pitches out of the strike zone -- and he's chasing fewer of those this year than he ever has -- but nobody can avoid swinging at some wayward pitches, either because they're fooled or because they have to protect with two strikes, as Bellinger arguably did there. When he puts those pitches in play, he's slugging .639 and hitting .444.

Later in the game he would strike out and single. He finished the game with 3.5 WAR.

The Padres starter was rookie phenom Chris Paddack, who had a 1.55 ERA going into the game. Bellinger popped out in his first at-bat, then batted with a runner on first and two outs in the third.

Paddack fell behind 2-0, then got a foul (on a 2-0 changeup) and a called strike (on an inner fastball) to even the count. With two strikes, batters are hitting .110 against Paddack this year, nearly half of those at-bats ending in K's.

Paddack threw a 95 mph fastball in the upper half, and Bellinger fouled it off, and then came a curveball way low, which Bellinger managed to tap foul toward his first-base coach.

These two fouls don't seem like all that much in the moment, but Bellinger's ability to stay alive in two-strike counts has been dramatically better this year: In his first two seasons, he made contact with 72 percent of his two-strike swings. This year, it's 86 percent. This is how he has cut his strikeout rate from 24 percent (worse than league average) last year to 14 percent (among the league leaders) this year. And that's how he has been one of the league's half-dozen best two-strike hitters this year. He hit the seventh pitch from Paddack for an opposite-field home run.

Bellinger finished that game with 4.5 WAR.

Bellinger popped out twice, drew an intentional walk, lined out and, against Jacob deGrom, homered. His game was more memorable for two defensive moments:

In the first inning, he threw out Michael Conforto at home with a perfectly placed throw.

And in the eighth, with the bases loaded and one out, he ended the inning by throwing out Carlos Gomez at third for a double play:

Those were Bellinger's sixth and seventh assists of the season, and they can be used to make the case for why Bellinger could break the all-time WAR record, or for why his early-season WAR is propped up by unsustainable defensive numbers.

The case for: WAR is the everything stat. It rewards (or penalizes) a player not just for his offense but his defense and his baserunning. Bellinger is one of the league's fastest runners and has one of its best arms. He can play center field well, and he's outrageously good in right. Now that he rarely strikes out and has improved his plate discipline, he is nearly flawless, perfectly built to help a team win in myriad ways (and pile up WAR).

Baseball Reference uses defensive runs saved for the defensive component of WAR. Bellinger, a third of the way through the season, has 16 DRS, on pace for nearly 50 runs saved. No right fielder has ever topped 40 DRS; Bellinger's 16 this year would have led the National League last year and nearly led in 2017. That's the case against: His WAR is built on too many defensive runs saved to take seriously.

It's easy to believe he really has earned those 16 runs on his ledger, or at least most of them. He robbed that Christian Yelich home run earlier this year. He has thrown two pitchers out at first base on apparent singles and three runners out at home. (He plays one of the shallowest right fields in the game.) He's a 95th percentile runner, according to Statcast. He's had great range and positioning this year, according to Sports Info Solutions, the data company behind DRS. And DRS isn't alone in loving his glove: Statcast's outs above average and Baseball Prospectus' fielding runs above average agree that Bellinger has been excellent, if not quite as good as his DRS and WAR say.

But as hard as it is to imagine Bellinger continuing to hit .380 with 60-homer power, it's even harder to imagine him keeping this defensive pace. Every week, Bellinger the hitter sees 120 or so pitches, 120 chances to do something extraordinary. In that same week, though, he might get three chances to do something extraordinary in the field, and all of them will turn on margins of a couple of inches. Further, he might only get two. Or he might get none. A lot of that is just out of his control.

Anyway, you already knew that Bellinger probably isn't going to end up having the best season of all time. But this is what it would look like if he did: He hits lefties and righties. He hits pitches in the zone and out of the zone. He takes huge swings and he hardly ever swings and misses. He's more aggressive in the strike zone and less aggressive out of the strike zone. He gets tons of walks and he rarely strikes out. He's one of the strongest hitters in baseball and one of the fastest. He's incomprehensible on offense and even better on defense. He's worth a win every 10 days. That guy probably doesn't exist for six months; nobody fitting that description ever has. But he did for two months, and we should never forget it. 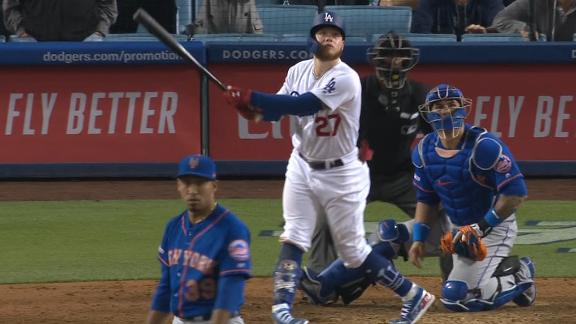 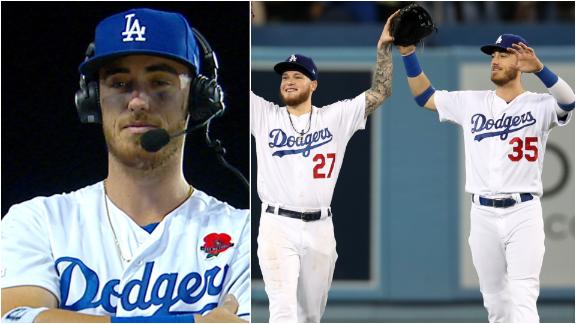