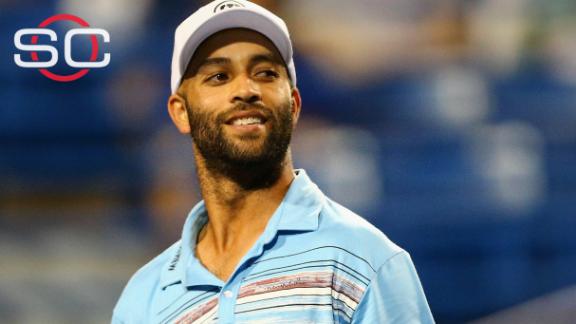 In a case of extreme mistaken identity, former tennis star James Blake was tackled and handcuffed by New York City police officers Wednesday outside of his hotel in midtown Manhattan.

Blake, who was on his way to the US Open to fulfill corporate responsibilities, told the New York Daily News that five white, plainclothes officers mistook him for someone they believed to be involved in an identity theft ring.

He suffered a cut to his elbow and a bruise to his leg and said he was most upset with the force used by the officers in apprehending him.

"You'd think they could say, 'Hey, we want to talk to you. We are looking into something.' I was just standing there. I wasn't running," Blake told the newspaper. "It's not even close [to being OK]. It's blatantly unnecessary. You would think at some point they would get the memo that this isn't OK, but it seems that there's no stopping it."

Blake, who is biracial, said he thinks race might have played a factor in the incident but that his biggest concern was the amount of force used.

A cooperating witness misidentified Blake to detectives investigating fraudulently purchased cellphones as one of two people he recognized as being involved with the scheme, NYPD spokesman Stephen Davis said.

"Once Blake was properly identified and found to have no connection to the investigation, he was released from police custody immediately," the NYPD said in a statement. "In regards to the alleged improper use of force, the Police Commissioner directed the internal affairs bureau to investigate."

"It's very disturbing," Bratton said. "The nature of what he described is not what we do. It's not what we're supposed to do."

Bratton said internal affairs detectives were sent to the hotel and already have identified several witnesses. As a result of the trip to the site, the NYPD said one officer has been placed on modified assignment after the investigators viewed surveillance video of the incident.

Officers arrested a suspect in the cellphone scam at the Grand Hyatt New York hotel in Manhattan during a controlled buy earlier Wednesday, police said. It was after that buy that a deliveryman with the cellphone company pointed out Blake and another man in the hotel lobby as having purchased cellphones the day before, officers said.

The second man, who Bratton said was standing next to Blake, was taken into custody. A hotel security guard, a former member of the NYPD, recognized Blake, prompting the arresting officers to confirm his identity.

Blake, who was once ranked as high as No. 4 in the world, said he worries about how commonplace situations like this might be.

"The real problem is that I was tackled for no reason, and that happens to a lot of people who don't have a media outlet to voice that to."

Blake, 35, was born in Yonkers, New York, and went to high school in Connecticut. He attended Harvard University before turning pro in 1999.

Blake declined to comment to ESPN.com, but his brother Thomas said James might address the situation again publicly in a few days.