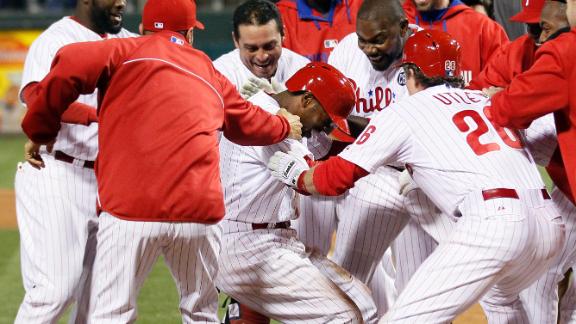 Jimmy Rollins channeled his frustration with a fan into something positive for the Philadelphia Phillies.

After being heckled by a fan in Philadelphia's Citizens Bank Park, Rollins belted a walk-off solo home run Saturday night, leading the Phillies to a 5-4 victory over the Miami Marlins.

Immediately after drilling Dan Jennings' 2-2 pitch into the seats in left field, Rollins yelled and gestured toward the stands above the Phillies' first-base dugout as he began his home-run trot.

"There was some fan in the stands popping off," Rollins said. "He was right behind our dugout, close enough to yell and piss me off, honestly. It was something pretty ignorant, but it worked."

It was the 201st career homer for Rollins, but just the second game-winning shot of his career.

The veteran shortstop said he told the heckler to keep his comments to himself.

"I politely told him to shut the [abbreviated expletive] up," Rollins told reporters. "I was locked and had some aggression. It just worked out I was able to tell him."

Rollins would not disclose what the fan said, referring to the taunt as "just a dumb comment." He claimed that he heard the fan at the beginning of his 10th-inning at-bat.

"He started chirping right after my first swing," Rollins told reporters. "I wanted to do it right when he said it, but I still had an at-bat to get through.

"You hear it a lot. A lot of times you want to say something back. This time I was able to."

Rollins has gotten off to a productive start this season following a controversial spring training, when the Phillies reportedly were considering trading the former National League MVP. The 35-year-old Rollins is batting .316 with two home runs and 10 RBIs in nine games this season.