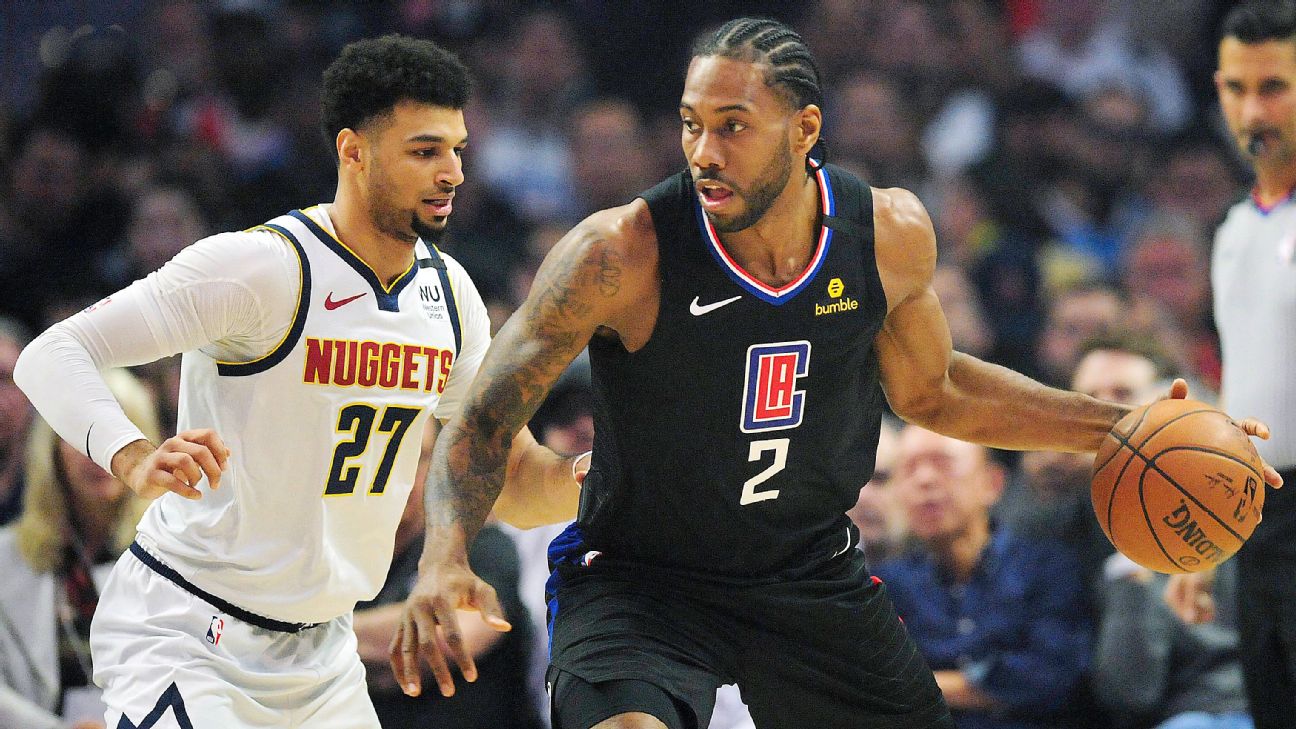 LOS ANGELES -- Doc Rivers wasn't able to run the LA Clippers' morning shootaround, so he asked one of his players a few hours before Friday's game how the team looked.

"One of our key guys [said] don't worry about it, we're locked in today," Rivers said. "So I didn't know if I believed it, to be honest, because you have to see it."

It took only five minutes for the Clippers to show their coach how focused they were and to give the Denver Nuggets a terrifying glimpse of their championship potential when at full strength.

Racing out to a 17-4 lead and never looking back, the Clippers played what Rivers called their most complete game. They steamrolled the Nuggets 132-103 in a matchup between the two teams vying for the second-best record in the Western Conference.

"I would say with us being healthy, full roster, yes," guard Paul George said when asked if this was the Clippers' most complete game of the season.

In a season disrupted by injuries and new additions, the Clippers were at full strength for only the seventh time and improved to 7-0 when having a full roster available.

This was only the third consecutive game in which the Clippers ran out their current starting five of Patrick Beverley, George, Kawhi Leonard, Marcus Morris and Ivica Zubac. The Clippers not only won their third straight game, but they completely blindsided the Nuggets as they pulled even with Denver at 40-19 behind the West-leading Los Angeles Lakers (45-12).

LA led from start to finish and by as much as 33 points. The Clippers, who had lost a season-high three straight prior to this current winning streak, have been inconsistent, with injuries to key players such as Leonard, George and Beverley. But they also have shown what they can do when they are motivated and focused, as in their two victories against the Lakers and now this thrashing of the Nuggets.

"I mean sky's the limit," Leonard said when seeing what the Clippers are capable of when focused and inspired. "We have very talented players, we got some youth, veterans, and when it's all put together, I feel like we can be one of the top teams. It's about just keep sustaining our health and trusting each other and just taking it one game at a time."

The Clippers scored 130 points for the 11th time this season, but their defense was perhaps even more impressive. Nuggets All-Star center Nikola Jokic had 21 points and nine rebounds but only two assists, while Jamal Murray was held to 11 points as Leonard, George and Beverley took turns on him in the first half.

The Clippers' bench scored 73 points, with four subs scoring in double figures led by Montrezl Harrell's 18 points and 10 rebounds. New addition Reggie Jackson had his best game as a Clipper with 10 points, 8 rebounds and 7 assists.

"We probably have the best second unit in the league," Morris said. "I look around the league and don't see no second unit that is even close to ours."

While Rivers wasn't there to see it at shootaround, George said he knew the Clippers had that same laser focus they had in their only two meetings against the Lakers.

"It's not even about how the game plays," George said. "It is about how we are prepared. Going into this morning we were sharp, we were prepared, we were locked in. There was no slippage in shootaround, and that trickled into the game."
Report a correction or typo
Related topics:
sportsespnnewspaul georgekawhi leonardla clippersnba
Copyright © 2020 ESPN Internet Ventures. All rights reserved.
More Videos
From CNN Newsource affiliates
TOP STORIES