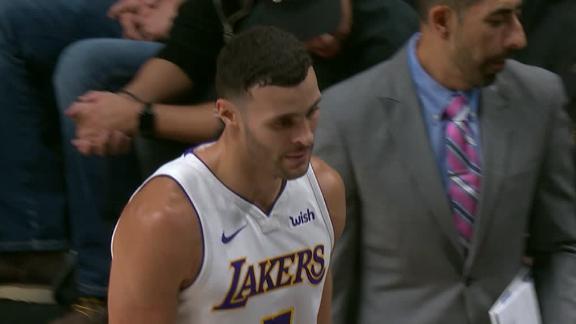 PORTLAND, Ore. -- The Los Angeles akers might have lost their starting power forward for some time afterLarry Nance Jr.suffered a broken hand in the team's 113-110 loss to the Portland Trail Blazers.

Nance underwent X-rays that revealed a fractured second metacarpal in his left hand. Nance left the game for good with 3 minutes, 45 seconds remaining in the third quarter before the Blazers handed the Lakers a 113-110 loss at the Moda Center. He left after he committed his fourth personal foul on Caleb Swanigan.

Nance did not talk after the game but his left hand and wrist were wrapped.

Lakers coach Luke Walton said Nance will be evaluated by team doctors on Friday and the team will know more about how much time he could be out. In the meantime, Walton likely has to find a new starting power forward with a game against the Brooklyn Nets on Friday night.

"Obviously he fractured his hand. I have no idea how long that takes," Walton said. "When we get all that information, we will sit down. ... I have always been a believer that it's not just the next best player. How does it affect second units? How does that affect the starting unit, and what we are trying to do? There are a lot of variables to decide between, so we will figure that out in the next day."

Nance has started all eight of the Lakers' games this season. He left with seven points, five rebounds and one block.

The power forward went into Thursday night averaging a career-high 11.1 points and 7.9 rebounds. He won the starting power forward spot in camp when Walton decided to bring Julius Randle off the bench for a spark because of his fit with the second unit. Walton liked how Nance's penchant for rebounding and providing defensive hustle plays complemented Brook Lopez.

Walton could turn to rookie Kyle Kuzma, Randle, Corey Brewer or Luol Deng to replace Nance in the lineup. Kuzma has provided the Lakers a spark off the bench and the rookie had a career-high 22 points against Portland. Walton, though, may want to keep his second unit intact with Kuzma and Randle providing an offensive lift when the starters rest.

"Gotta rebound, Larry is a big piece for us," Kuzma said. "He rebounds, plays with a lot of energy, he does all the little things. As a group, we got to pick it up."