Lakers leave an impression on LeBron in punishing rout of Cavaliers 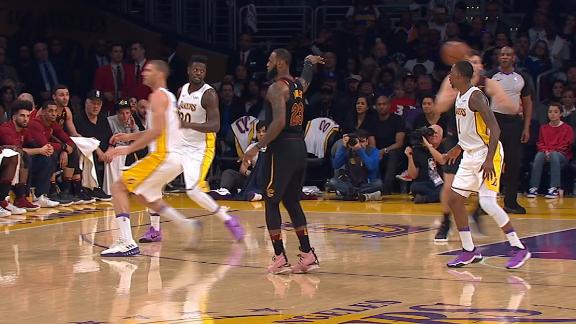 While this wasn't anything close to erecting billboards around the Los Angeles area trying to lure James as one longtime Lakers season-ticket holder did last week, the Staples Center crowd clearly wanted James to know that they'd love to see him here again next season and preferably in a purple and gold No. 23 jersey.

If this was James' last trip to Los Angeles as a Cleveland Cavalier with a potential NBA-altering free-agency decision to make this summer, the Lakers took the opportunity to leave James with one final impression. The Lakers used a 22-3 run at the end of the third quarter to run away with a 127-113 victory over the Cavaliers.

With the win, the Lakers have now gone 7-2 after the All-Star break. Meanwhile, the Cavs (38-28) have dropped down to No. 4 in the Eastern Conference standings, with the Indiana Pacers (39-28) moving a half-game ahead of them.

James wowed the crowd with some flashy passing and scoring drives in the paint before finishing with 24 points, 10 rebounds and seven assists in 31 minutes. But James didn't have much help and he displayed some frustration after he had a pass deflected by former teammate Isaiah Thomas for a turnover that later resulted in a Julius Randle dunk for the Lakers. As the Cavaliers called timeout while down 115-94, James palmed the ball and motioned as if he wanted to throw it in frustration before cocking back. That was the last thing James did on the court before exiting for good with 6 minutes, 24 seconds left in the final frame.

Larry Nance Jr. -- playing against his former team for the first time since he and Jordan Clarkson were traded to Cleveland for Thomas, Channing Frye and a protected first-round pick -- had 16 points. He was the only Cleveland starter outside James to score in double-figures.

"I have never played LeBron in L.A.," said Lakers rookie point guard Lonzo Ball, who finished with five points and seven assists. "Never played against JC and Larry, other than practice. It is going to be a lot of fun."

The Lakers did have a lot of fun on Sunday night at James' expense. Thomas, who shared hugs with several of his former Cavs teammates including J.R. Smith at half court before the game, got a little revenge against the Cavs who traded him away after he played only 15 games for the them following his hip surgery.

Thomas -- who shot a few glares at good friend Floyd Mayweather Jr., seated near the Cavs' bench, after making a couple of baskets -- had what might have been his best all-around game for the Lakers with 20 points, nine assists and five rebounds. Thomas had six points and two assists during the Lakers' game-changing run.

Thomas said afterward that he had nothing to prove and that this was not a revenge game for him.

"No, I don't need to show anybody," Thomas said. "They know what I can do. I only played 15 games for them, so it's really not about showing them what I can do. The world knows what I can do and what I bring to the table. I took it as another game and I just wanted to win and we did a helluva job as a team, beating that really good team over there."

Randle, who had been slowed by an illness in the previous two games, had a career-high 36 points, 14 rebounds and seven assists. Randle is a key piece for the Lakers because they can clear up to $70 million in cap space this summer to pursue two max free agents by parting ways with Randle and stretching Luol Deng's contract.

But Randle played on Sunday like a player who was determined to remind the Lakers what they have in the 23-year-old forward and show James at the same time how his game is blossoming. Randle has been on a tear since being inserted into the starting lineup at the beginning of the season, but this was the best performance of his career.

Clarkson, who finished 1-for-8 from the field with just four points and four assists, and Nance stopped by the Lakers' locker room before the game to say hello to their old friends.

"Yeah, they stopped by [the locker room] on their way in -- uninvited," Lakers coach Luke Walton deadpanned before the game. "It was good to see them. It will be fun. It is going to be a great energy, great environment for tonight."

Celebrities such as Mayweather, Adam Levine, Jason Sudeikis and Marlon Wayans joined Lakers fixture Jack Nicholson to get their glimpse of James' only trip to Los Angeles to play the Lakers this season.

They might've come to see James but instead watched the Lakers make one big final impression on the free-agent-to-be.