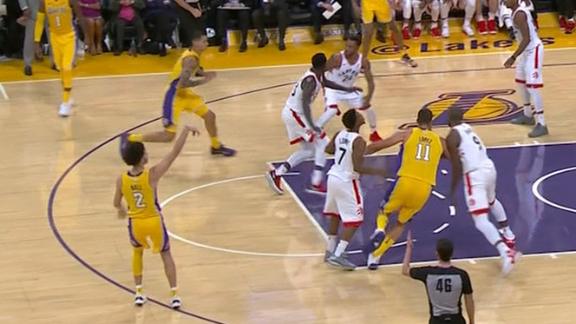 LOS ANGELES -- Lonzo Ball's day started with LeBron James wishing him a happy birthday, and it ended with Lakerscoach Luke Walton benching him and the rest of the team's starters for the first time this season.

On the day he turned 20, Ball and the starting unit were benched down the stretch of a game that was still within reach as an unhappy Walton tried sending a message to his starters.

Ball, Brandon Ingram, Kentavious Caldwell-Pope, Larry Nance Jr. and Brook Lopez were all yanked with 3 minutes, 42 seconds remaining and the Lakers trailing 91-83 before dropping a 101-92 loss to the Toronto Raptors at Staples Center.

"I took the starters out a little early in the third because they didn't get back in transition defense, which is our No. 1 key to being a good defensive team," Walton said. "We talked about how important that third quarter was with the momentum of the game changing and them being a playoff team, so we can't afford to give those up. So as a teaching lesson, we took them out a little earlier than I normally have done.

"Unfortunately, we didn't get back on defense again with four minutes to go in a close, winnable game," Walton added. "You can't just give away free points. To let them know how serious we are about transition defense, we pulled them out again. We were going to let the starters see what they can do with the game. But when they didn't get back on the break, they are telling me and each other that they don't really want to finish that game."

This was not how Ball envisioned celebrating his birthday. The No. 2 overall pick was hoping to follow an upset win over John Wall and the Washington Wizards with a victory over the Raptors. But Kyle Lowry gave Ball a taste of an NBA triple-double, posting 11 points, 12 assists and 10 rebounds for Toronto (3-2).

Ball, who came in the game averaging nine assists and nine rebounds and has flirted with a triple-double in three of his first five games, finished with five points, seven rebounds, six assists and two steals but had four turnovers. Three of Ball's turnovers came as the Lakers blew a 17-point lead.

The Lakers (2-3) were up 47-30 with 3:56 left in the first half, but Toronto went on a 27-9 run to erase the deficit in less than eight minutes. Ball was in the game in the fourth for nearly five minutes, but the other starters lasted no more than 2:44 on the court before Walton had seen enough and decided to go with Kyle Kuzma (15 points, 10 rebounds), Julius Randle (18 points), Jordan Clarkson (11 points), Corey Brewer and Josh Hart.

"I think we just lost our intensity, to be honest," Ball said. "A good team over there, and they came back [in the] second half strong, and we didn't accept it very well, and we lost.

"[The starters] gave up a lot of fast-break points, people not getting back. It was a unit thing, so that is why he pulled everybody," Ball added. "We were just ball-watching, to be honest. I was supposed to be back on the point guard, sometimes I go crash [the glass], and I am supposed to get back and just not talking."

For the third straight game, Ball struggled with his outside shot. He made his first 3-pointer in three games but is shooting just 7-for-31 overall, including 1-for-14 from behind the arc, during that stretch as defenses are sagging underneath screens.

"I am going to keep shooting," Ball said. "It is going to start falling."

Walton said he is not concerned with the rookie's shot.

"His shot is going to be fine," Walton said. "With Lonzo, we just want him to keep getting comfortable and keep pushing, and he keeps getting clean looks. He makes a lot of those on the practice floor, and he gets his work in. So, not too concerned five games in."

Ball's day started with James tweeting a birthday wish to him:

Even though he didn't finish his birthday with what he wanted most -- a win -- the Raptors were impressed by the rookie.

"I think he is very talented and has the ability to be a heck of a playmaker," Lowry said. "I think he has to be more vocal. He is an unselfish player, a team-first guy. I think he has some special talents and ability. He will be very, very good."

Raptors coach Dwane Casey is the latest to say that Ball reminds him of Jason Kidd.

"I think he's a throwback to Jason Kidd," said Casey, who coached Kidd in the point guard's second stint in Dallas when he was an assistant there. "He reminds me of a young Jason Kidd without the 3-ball, [but] Jason started the league without [that shot]. His size, his demeanor, he has a calming effect on his teammates. He doesn't get rattled.