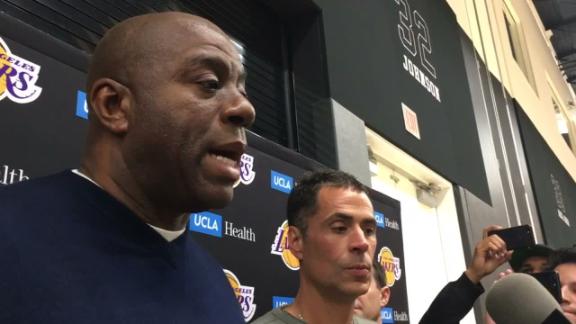 EL SEGUNDO, Calif. -- After positioning themselves to potentially clear as much as $70 million in cap space by trading Jordan Clarkson and Larry Nance Jr. to Cleveland for Isaiah Thomas, Magic Johnson reiterated that the Los Angeles Lakers will pursue two elite star players.

Johnson, the team president, said he remains confident that he and general manager Rob Pelinka will lure two stars to Los Angeles in this July's free agency -- which could includeLeBron James and Paul George -- and/or free agency in 2019.

"I wouldn't have made the move if I wasn't confident," Johnson said Thursday at the team's facility after acquiring Thomas, Channing Frye and a protected 2018 first-round pick from Cleveland. "Still the same [confidence]. ... We have got to take the next step. I like our core. I love the way Julius [Randle] is playing right now; this is the best I have seen him play. ...

"But again, we're still on the outside looking in. No matter how good we've been playing, we're not in the playoffs, we are not one of the top eight teams in the West. That's just the bottom line. So I don't want to stay in this position. I want to have us be in the playoffs, and the only path to that is to add to the roster that we already have."

Johnson added: "I don't want to stay where we are. I don't want to be on the outside of the playoffs looking in. We have to take another step, right? So this move allows us to position ourselves to hopefully take that next step."

Johnson and Pelinka made it clear that Thomas will play for the Lakers and that management can see him mentoring and playing alongside rookie point guardLonzo Ball. Johnson said Ball remains the team's starting point guard but that the Lakers need someone to fill the role while Ball is out with a sprained MCL.

"We talked to him. He's so excited," Johnson said of Thomas. "He said his father was born and raised in Inglewood so he's really excited, and also right now Zo's hurt. We need a point guard. So especially with that type of experience and the fact that he can score the basketball and pass it, we want to get him in here fast. We told him that. ... We need somebody to come in there and lead our troops."

"It's not about starting, it's about how many minutes you get," Johnson added. "He's going to get a lot of minutes."

The deal was made to help the Lakers shed Clarkson's contract, which had two years and $26.9 million remaining. Thomas ($6.3 million) and Frye ($7.4 million) are on expiring contracts.

The Lakers -- who want to add stars to a core that includes Ball, Brandon Ingram and Kyle Kuzma -- now project to have $46.9 million in cap room this summer, but they control how much they can increase it with decisions to be made on Randle and Luol Deng. The Lakers can increase their cap space to around $70 million if they do not bring back Randle, who will be a restricted free agent, and find a solution, likely the stretch provision, to the $37 million that is owed to Deng, according to ESPN's Bobby Marks.

"There's so many different ways you can use that [cap space]," Pelinka said, "And then, of course, the obvious way is we now have in July of 2018 and July of 2019, we now have real 100 percent space to do two max players if that's what we decide to do, or one in 2018 and then following it up with another one in 2019. So the flexibility is really amazing.

"If you break it down and study the cap, we feel like we're the most strongly situated franchise in the NBA in terms of where our cap stands."

The Lakers were also thrilled to acquire a first-round pick after not having one in the upcoming draft because of a 2012 trade for Steve Nash. After landing Ball (No. 2), Kuzma (No. 27) and Josh Hart (No. 30), the Lakers hope to find another first-round gem.

But it is all about bringing superstars back to Los Angeles, which is what Johnson is charged with doing and why he is leading the rebuild of one of the NBA's most storied franchises.

"If you look at teams that are doing really well right now, if you look at the Boston Celtics in the East, they had flexibility to take advantage of a very unique situation that happened in the offseason. We can't talk about specific players' names," Pelinka said as Johnson covered his mouth, a reference to the team being fined twice for violating anti-tampering rules. "They were in a position to take advantage of an unexpected, unique opportunity that has led them to being an elite team. We now are in that position as the Lakers. We weren't before the deals we made. And those opportunities will come. We know that."

Pelinka added: "Let's face it: In this league, you can't have an elite team if you don't have the elite players. So that has to be the strategy if you want to be elite." 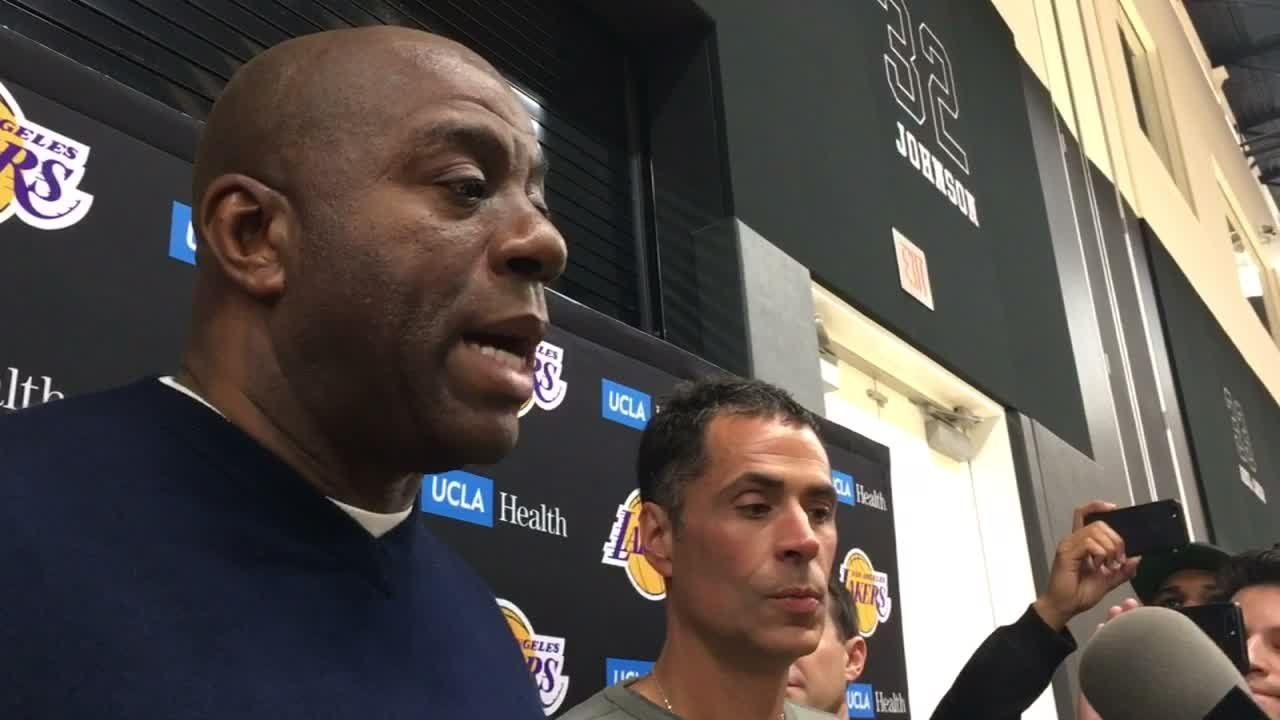 Lakers deal gives them flexibility moving forward
Magic Johnson and GM Rob Pelinka say it was a bittersweet trade but it was a necessary move to make the Lakers contenders.