Manny Machado called out as 'dirty player' after play at first 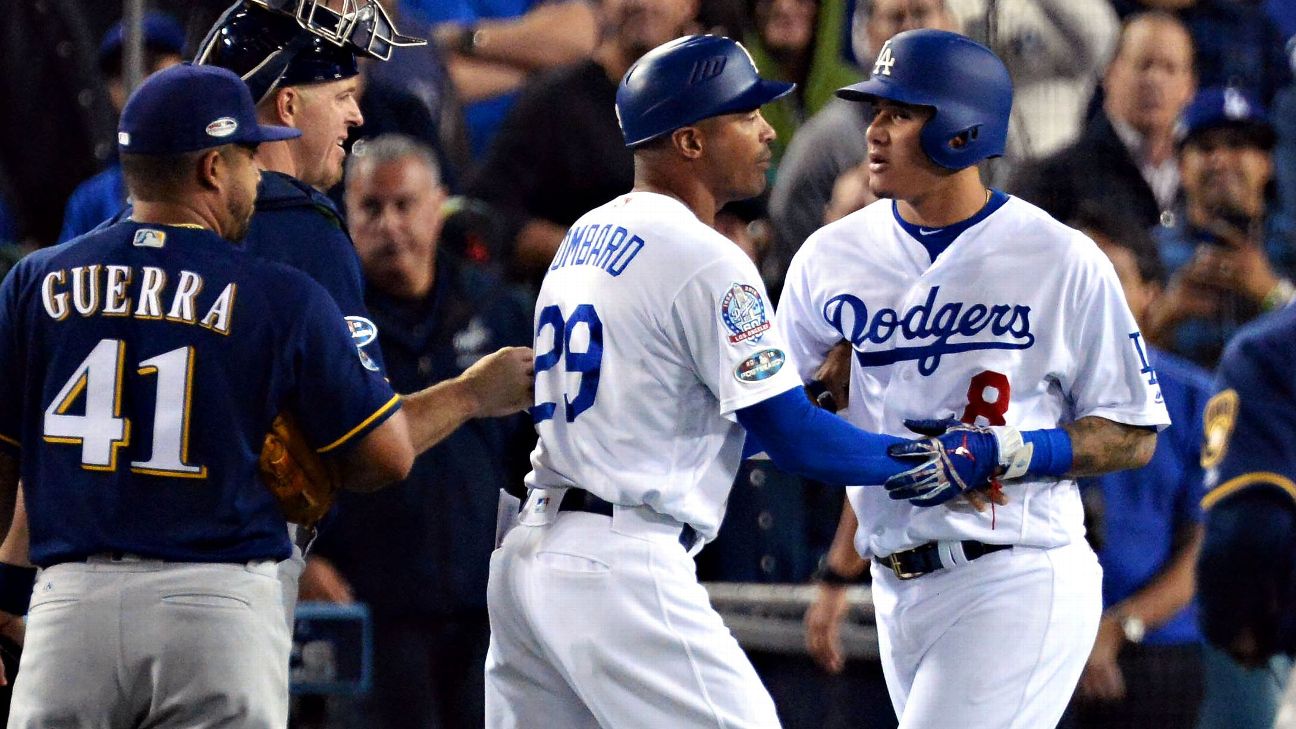 LOS ANGELES --DodgersshortstopManny Machado was called out for being a "dirty player" and not "playing all that hard" by the Brewers after clipping the back leg of Milwaukee first baseman Jesus Aguilar while running out a groundout Tuesday night in the 10th inning of Game 4 of the National League Championship Series.

Both benches cleared after the incident. Aguilar's right foot was on first base, and it appeared Machado intentionally kicked it with his left foot out of frustration after being called out.

When Brewers manager Craig Counsell was asked whether Machado was going beyond the grounds of playing hard, he said, "I don't think he's playing all that hard."

Aguilar, who wasn't hurt on the play, said he and Machado "turned the page" afterward. The two hugged after Machado singled in the 13th inning, just before Machado scored the game-winning run onCody Bellinger's walk-off single to tie the NLCS at two games apiece going into Game 5 on Wednesday at Dodger Stadium.

When Machado was asked again about the play, he said, "I was trying to get over him and hit his foot. If that's dirty, that's dirty. I don't know, call it what you want."

Machado also said that he and Aguilar have been friends for years, calling the Brewers slugger a "great guy."

"Everything that happens on the field stays on the field," Machado said. "He's a great guy. We go way back since the minor leagues. So it's just a friendly game, go out, try and compete here. We're trying to win. He's trying to do whatever he can to help his team over there, and we're doing the same over here."

The rest of the Brewers didn't appear to be quite as forgiving. Infielder Travis Shaw also called it dirty, and Yelich followed up his postgame criticism of Machado by yelling a profane epithet as he walked away from his locker.

"The play at first today is a pretty dirty play," Shaw said. "It's not a mistake. You don't kick somebody like that on accident. You can say it wasn't on purpose, this and that, but it's a dirty play."

No one was as outspoken about Machado after the game as Yelich as he answered questions from reporters about the play.

"It was a tough-fought baseball game. It has no place in our game. We've all grounded out. Run through the bag like you've been doing your whole life, like everybody else does. If it's an accident, it's an accident; but on the replay to us, it clearly looks like you clearly go out of your way to step on someone. It has no place in our game. It really doesn't."

The incident came just one day after Machado was called out for his style of play following a couple of hard slides at the legs of Brewers shortstop Orlando Arciato break up potential double plays in Game 3.

The Dodgers acquired Machado from Baltimore this season for their playoff push and to replace injured shortstop Corey Seager. Machado had 37 homers and 107 RBIs in the regular season, and he batted .242 with three homers and nine RBIs in the first eight games of the postseason.

Benches clear after Machado-Aguilar altercation
Manny Machado and Jesus Aguilar exchange words after they collide at first base, resulting in the benches emptying. 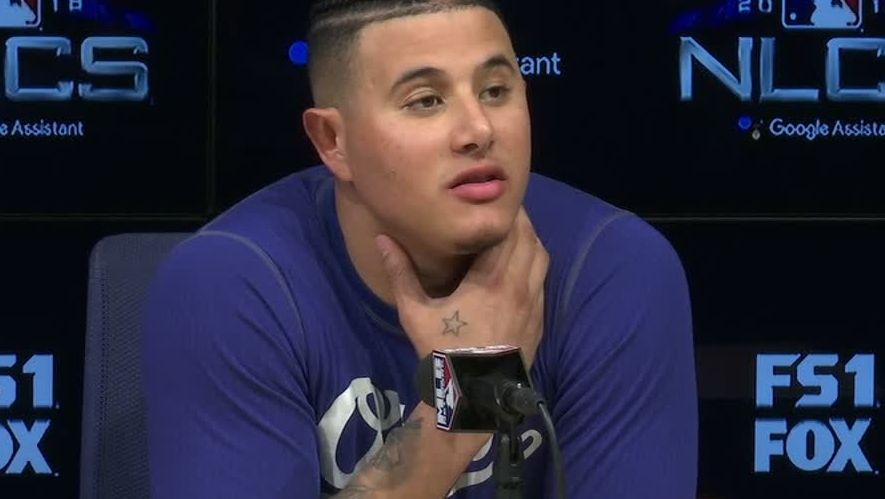