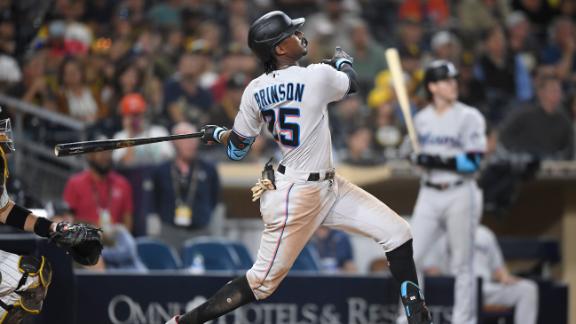 Coming into the game, Musgrove (8-7) was the only major league pitcher with 20-plus starts this year to throw breaking balls on more than half of his deliveries. He kept the Marlins off-balance, surrendering only one run and five hits while lowering his ERA to 2.81.


"(The breaking pitch) was not as sharp as it has been in the past handful of starts. ... I was still able to get it in the zone," Musgrove said. "The slider was a lot sharper for me tonight."

Eric Hosmer hit an early homer off Zach Thompson (2-5), then added an RBI single in a four-run eighth that broke open the game. Hosmer has hit over .400 (21 for 50) at Petco Park since the beginning of July.

"Hosmer has been spot on. He came out of the All-Star break and he is really putting it together. Great at-bats versus righties and lefties," Padres manager Jayce Tingler said. "Big at-bats tonight from Hosmer."

Miami outfielder Lewis Brinson, who spoke before the game about an incident with racial overtones Sunday as the Marlins played at Coors Field in Denver, had two hits and scored twice.

Brinson hit a two-run homer high off the warehouse building in left field against Emilio Pagan in the eighth that narrowed San Diego's lead to 4-3.

The Padres scored twice in the fourth on a single by Victor Caratini that drove in Hosmer and a sacrifice fly by Musgrove.

Trent Grisham hit a two-run triple in the eighth and Caratini added a sacrifice fly.


"We are playing pretty good baseball right now and we want to continue that," Tingler said.

Brinson spoke hours after the Colorado Rockies said a fan yelled the name of team mascot Dinger and not a racial slur as the Black outfielder batted Sunday. Brinson said he'd reviewed the tape and had a different opinion.

"So I watched the video at least 50 times in the past 15-16 hours," Brinson said. "I watched it a lot, especially when I heard that he said Dinger instead of the N-word."

"I personally - this is again my personal opinion - I personally keep hearing the N-word," he said. Brinson added: "I haven't talked to the Rockies or that fan personally. If that's the case, then I'm sorry for any backlash or anything he's getting right now."

"After a thorough investigation that included calls, emails and video clips from concerned fans, media and broadcast partners, the Colorado Rockies have concluded that the fan was indeed yelling for Rockies mascot Dinger in hopes of getting his attention for a photo, and there was never any racial slur that occurred," the team said in a statement Monday.

Marlins: 2B Jazz Chisholm Jr. (flu-like symptoms) was scratched from the starting lineup on Sunday against the Rockies and stayed behind in Colorado. His return is TBD. ... Manager Don Mattingly tested positive for COVID-19 on July 31 and his condition continues to progress, according to Marlins acting manager James Rowson. ... RHP Pablo Lopez (right rotator cuff strain) is scheduled to throw a 30-pitch bullpen session on Tuesday after completing a 20-pitch session on Aug. 7. He is slated to be back by the end of August.

Padres: RHP Daniel Hudson (COVID-19 protocols) is expected to return Aug. 11 or 12, according to Tingler. Hudson, acquired from the Washington Nationals in the trade deadline deal, has yet to pitch for San Diego. On Monday Hudson faced five batters in a live patting practice session. ... SS Fernando Tatis Jr. (left shoulder subluxation) won't be ready to return from the 10-day IL when eligible on Tuesday, but he began taking on-field batting practice on Monday. It's possible Tatis will be moved to outfield upon his return, with the Padres possibly deeming the position safer on his ailing shoulder than shortstop.

Marlins: The starter is TBA for Tuesday night's game.

Padres: RHP Craig Stammen (5-2, 2.71), normally a middle reliever, will take the hill in the second game of the three-game series.