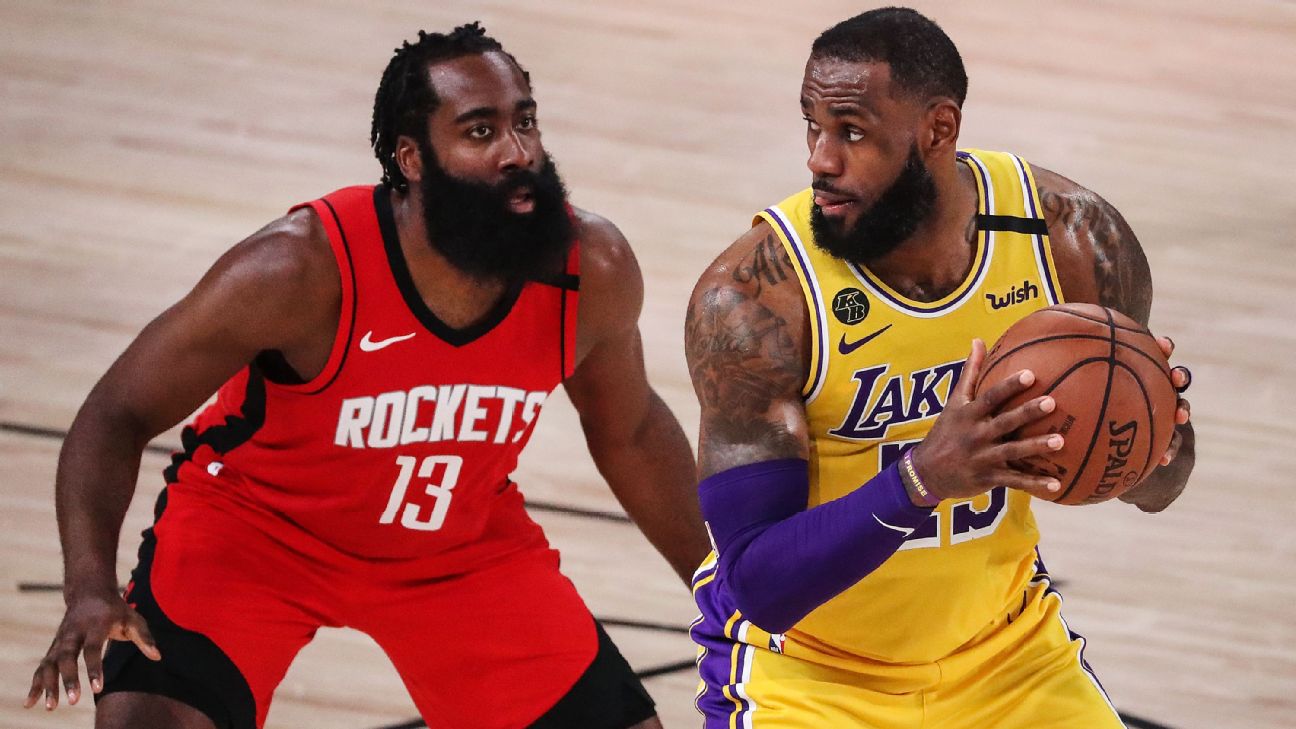 IT'S A FIVE-POINT game in a 1-1 playoff series, and the game clock ticks inside two minutes in the first half when LeBron James goes in his bag.

The sequence begins when James snags a defensive rebound and advances the ball up the left side of the court. Once past the massive NBA logo engulfing the tipoff circle at AdventHealth Arena, the Los Angeles Lakersstar slows his dribble ever so slightly. This delay allows teammateAnthony Davis to step between James andGary Trent Jr., who was assigned the thankless task of guarding James in the first round, to set a brush screen.


Trent pushes Davis in the chest to stop himself from getting stuck on the screen, and as James lingers at the 3-point line and yo-yo dribbles the ball back and forth between his legs, Davis resets the pick. Trent is caught this time. James gets his shoulder down and springs toward the lane.

Here's where the fun starts.

Portland's Wenyen Gabriel, who had been guarding Davis, switches onto James and awaits him at the foul line.

A 6-foot-9, 200-pound power forward, Gabriel is about to be made to look like a traffic cone by the 6-9, 250-pound James, who is dabbling at point guard in the twilight of his prime.

James angles his drive from the middle of the court toward the left elbow. Once Gabriel commits, sliding his feet to meet where he assumes James is heading, the trap is set. James spins left to right and shields Gabriel's now off-balance defensive flail at the ball with his left shoulder.

He gently lays the ball in off the glass, and Gabriel can do nothing but catch it out of the net and throw an inbounds pass to CJ McCollum.

Gabriel had, of course, braced for contact. Which is understandable, given that he was thwarting a thrust from one of the most physically imposing players the league has ever seen. But James' spin move away from Gabriel's body had left the Portland big man disoriented and prone, the audience to a basket from James that had cut the Trail Blazers' lead from five to three.

It was just another perfect execution of a signature move James has developed in recent years. The spin move is the middle ground between savage and savvy, requiring physical prowess to generate centrifugal force but relying on timing and grace to properly redirect momentum.

"It's like a locomotive that jumps the tracks," Miami Heat coach Erik Spoelstra says. "There's nothing you can do."

THERE WAS A time when Gabriel and others like him would have ended up like a splattered bug on James' windshield, a time when James' first instinct was to finish drives to the hoop with an aerial assault that turned defenders into mere hurdles.

But his game evolved. During his first stint with the Cleveland Cavaliers, James was most dangerous when throwing down powerful dunks. In Miami, he developed a post game and his efficiency skyrocketed. When he went back to Cleveland, he had better command of his jump shot.

"One of the things that I always used to say when people ask me about his game is, he was barely scratching the surface back then. And he was a great player then," says Golden State Warriors assistant coach Mike Brown, who in 2007 coached James to his first NBA Finals appearance with the Cavs.

"So the spin move that he has now, it's a dangerous weapon. But I just look at that as part of his repertoire of many things he can do and many ways he could hurt you if you don't respect his game all over the floor."

It is James' constant threat of beelining to the rim that has defenses retreating and gives the spin its sizzle. And make no mistake, the move torches opponents.

He brought the spin with him to the NBA bubble. In six seeding-round games, James sprung the spin on opposing defenses 12 times. He scored or was fouled seven times (58.3%). When his spin led him to a shot, he went 3-for-4 (75%). The other spin possessions ended up with one pass and three turnovers.

In the first round of the playoffs against Portland, he went to the spin more often -- breaking it out 11 times in five games, but with less success. He scored or was fouled four times (36.4%) and was less accurate when he used it to find his shot, going 3-for-6 (50%). He had more passes out of the spin (three), however, and fewer turnovers (one).

It's a small sample size, but the results weren't an anomaly.


When analyzing 462 drives James made to the basket from his L.A. debut last season through early February of this season -- about his first 100 games as a Laker -- ESPN found that of the 58 times James drove and spun, he either scored, assisted or was fouled 44 times, per Second Spectrum data. When he drove, spun and shot, his efficiency spiked to 70.2% (26-of-37 on attempts).

The move has become so central to James' toolbox, it's natural to wonder when he began to trust it as one of the most reliable parts of his game.

"I have no f---ing idea," James says when asked about his increase in spin moves. "I'm going to be completely honest. I have no idea when that became such a big part of my semi-transition."

No matter the origin, James recognizes the power of it.

"It's a very effective move because of my size and my speed," he says. "[The majority] of the time, it's successful. I've been unsuccessful with it a few times where guys have gotten a block or I haven't gotten enough body contact and they've been able to challenge it a little bit more. But ... it's a pretty successful shot for me. Very balanced."

THE LIST OF people James has dunked on can be divided into categories. You have the Hall of Famers in Tim Duncan and Kevin Garnett. The All-Stars in Rasheed Wallace and Paul Millsap. The feisty wings in James Johnson and Ersan Ilyasova. The big men in Jusuf Nurkic, Nemanja Bjelica, Ian Mahinmi and Ekpe Udoh. The guards in John Lucas III, Jason Terry, Ben McLemoreandDelonte West-- and Russell Westbrook in the second round against the Houston Rockets.

And then the guard with the big mouth, Damon Jones. LeBron got him back in 2005.

Jones, orchestrating the Miami offense from the top of the key, attempted to throw a pass to Eddie Jones on the right wing. James, wearing a mask after Dikembe Mutombo elbowed him in the face the game before, jumped up to intercept the pass and immediately dribbled up the floor before advancing the ball ahead to Cleveland's Jeff McInnis.

Damon Jones, having made the turnover, hurriedly backpedaled to try to contest the pair of Cavs coming for the bucket.

James continued filling the left wing after his outlet to McInnis, and McInnis fed it back to James, who jumped through Jones to send home the hammer dunk.

"I mean, he actually fouled me," Jones says, looking back at the play. "He actually fouled me and the referee was just like everybody else -- being a fanboy. And he called a foul on me when he should have called an offensive foul with [James'] elbow."

Not that he minds being on the wrong end of James' career highlight reel a decade and a half later. But dunks like the one on Jones in the open court have made opponents literally run and duck for cover when they see a charging James.

"You can't do anything. No. Just get out of the way, don't get run over," Rockets coach Mike D'Antoni says. "Can't afford to lose anybody [to injury]. No, he's that good."

Unlike the days when he'd finish fast breaks with a dunk no matter who was in front of him, LeBron's spin move might be super effective, but it's not unstoppable.

Danny Green, a Lakers teammate, was known as one of the better transition defenders in the league when he played for the San Antonio Spurs. From 2014 to 2018, Green ranked in the top 30 in the NBA in that category, according to Second Spectrum, topping out as the 11th best with just 1.27 points allowed per 100 possessions as the closest defender in transition in 2015-16.

After some cajoling, Green indulges how he would attempt to thwart the James spin.

"This is one of those things, it's a timing thing," Green says. "You have to kind of predict and guess. It's a risky play. Just like when Tony [Parker] was doing it in San Antonio, [James] does it now.


"And mind you, the only difference is, he's 6-9 and jumps 40 inches in the air, so you're really not going to block his shot."

The defender can time it two ways: setting up to take a charge the moment James makes contact with him or swiping down at the ball when James exposes it, ever so briefly, when going left to right.

Still, Green recognizes that resistance can be futile -- even as James advances into his mid-30s.

"Obviously, you get older, you use different ways of being craftier instead just jumping over everybody -- he still can [jump over people], he's capable," Green said. "But he's very smart in his approach of when he uses that. He takes his time and gets to the basket. Gets an easy one."

THE SCORE WAS knotted at 103 with 8.0 seconds left in Game 3 of the Cavs' 2018 second-round series with the Toronto Raptors when James received the inbounds pass near the baseline, turned and scanned the 94 feet of shiny maple laid out ahead of him.

The Raptors initially showed a trap and quickly retreated, allowing James to pick up steam as he pushed the ball up court for the possession that could decide the game.

With OG Anunoby backpedaling as the primary defender, James made his move with 3.5 seconds left, using a right-to-left dribble near the timeline to burst by the Toronto forward. With the buzzer looming and Anunoby behind him on his hip, James stopped his dribble nine feet from the hoop, faded away toward the sideline and lofted in a bank shot with his right hand as time expired.

Theoretically, James could have played out the possession by using the left-to-right spin on Anunoby and tried to win it closer to the paint, with only Kyle Lowry and Fred VanVleet -- a pair of 6-footers -- sagging near the hoop.

But James chose to execute the play in a manner in which he was more comfortable, given the circumstances.

Before James' spin can be placed in the annals with Michael Jordan's fadeaway, Kareem Abdul-Jabbar's skyhook or Allen Iverson's crossover dribble, James says it still has to be field tested in extreme conditions.

Indeed, James often relies on pull-up jump shots when his team needs a bucket in end-of-game situations. Defenses tend to settle in and pack the lane when it's a do-or-die possession.

But he has dabbled with the move as of late. In a tense Game 3 against the Rockets during the second round, James took P.J. Tucker off the dribble from the top of the key with 3:44 left. The familiar left-to-right spin began just inside the free throw line as James snaked through the Westbrook double-team and laid the ball in to give the Lakers a 103-91 lead.

Still, it was a 10-point cushion when he executed the spin. 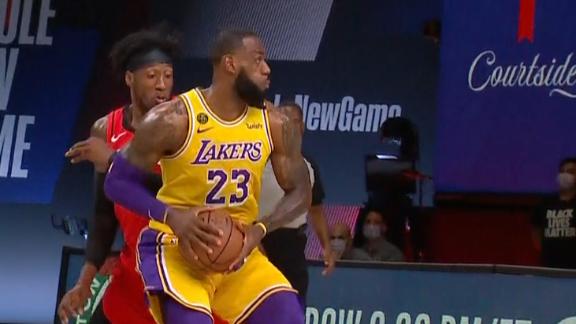 LeBron goes spin cycle for early bucket
LeBron James drives into the paint and spins around Robert Covington to finish at the rim. 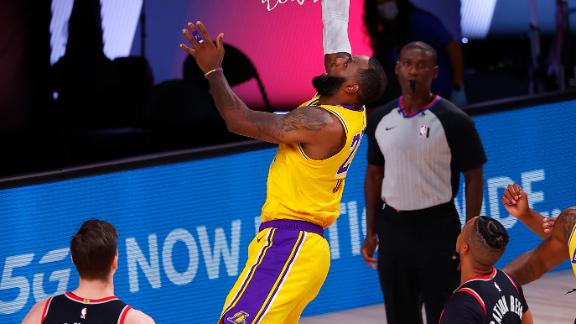