NFL official: Redskins 'not a slur' 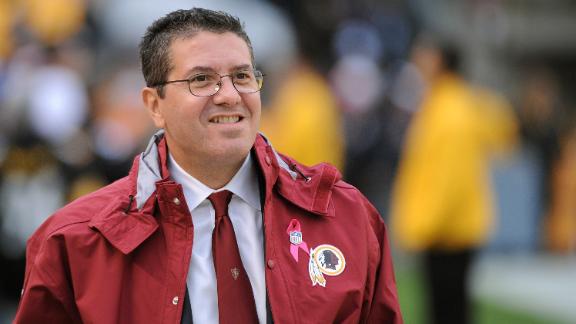 An NFL official said Friday that the Washington Redskins' name is not a racial slur, a day after the head of the NFL Players Association said some think it is.

Adolpho Birch, the NFL's senior vice president of labor policy and government affairs, was asked by "Outside The Lines": "Is the team name a slur, yes or no?"

"The team name is not a slur," Birch said in a phone interview.

He added: "I think that is part of the issue with the question is that it is constantly being sort of put into a point-blank, yes-or-no, yes-or-no kind of context when that's not the reality of the situation that we're dealing with."

NFLPA executive director DeMaurice Smith on Thursday told ESPN's Sal Paolantonio: "It's an important issue. The name Redskins is offensive to some and is a slur, I'm not sure that this issue boils down to what any particular player has to say -- what it boils down to is the united nation and others have raised a legitimate conversation to the NFL about the name of the team that is entirely within their control."

Smith told reporters that his conversations with NFL commissioner Roger Goodell on the Redskins name should be private. He did say he has talked with members of the Oneida Indian Nation about their concerns.

Redskins owner Daniel Snyder has repeatedly said he does not intend to change the name.

"I would tell you that the Washington Redskins Football Club, the name of that organization is not and never has been intended to be used as a slur and is currently not one as well," Birch said on "OTL."

After the interview, NFL spokesperson Greg Aiello told ESPN: "The team and our office have always said the name is intended to be positive and respectful. Why would you name a sports team otherwise for 80 years? ... As Adolpho said, our position is the same as it's been."

Last week, 50 members of the U.S. Senate wrote a letter to Goodell asking that the name be changed.

U.S. Rep. Eleanor Holmes Norton of the District of Columbia believes the name "is going to go."

"Four times, the team tried to patent the word 'Redskins,' and four times the patent and trade commission has turned it down," she said Friday on the "Capital Games" podcast. "This name is going to go. My regret is that neither Goodell nor Snyder have taken the kind of leadership we'd expect, particularly in a progressive city like this where a name that is derogatory of any group has no place."

NFL: Redskins' Nickname Not A Slur
Adolpho Birch, the NFL's senior vice president of law and labor policy, said on OTL the Washington Redskins' nickname was not a slur.