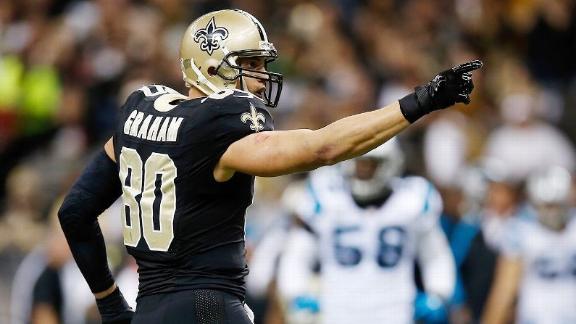 It took a little longer than anticipated, but New Orleans Saints star Jimmy Graham has filed a grievance through the NFL Players Association to challenge whether he should be considered a tight end or wide receiver for franchise-tag purposes.

The Saints placed the franchise tag on Graham in early March, and the NFL's management council ruled that he is a tight end, a position that has a mandatory tag salary of $7.05 million.

Graham, however, says he should be considered a receiver because he lined up for 67 percent of his snaps either out wide or in the slot in 2013. If he wins, his franchise-tag salary will vault to $12.3 million.

More importantly, the winner of this debate will gain significant leverage in long-term contract negotiations.

"We disagree, and the system exists for us to have the ability to file grievances in those cases," NFLPA executive director DeMaurice Smith said Wednesday. "And when we believe that there is a good basis to do so in order to protect our players, that's what this union does."

The next step in the process is for the players' association and the management council to agree on a neutral, third-party arbitrator. It's unclear how quickly the process will begin or when a hearing will be scheduled.

It's also unclear what motivated Graham to file the grievance at this time. But it could speed up negotiations between the Saints and Graham's agent, Jimmy Sexton, if both sides decide they want to reach an agreement before an arbitrator gets involved.

In past years, similar debates have sprung up with free-agent tight ends Jared Cook and Jermichael Finley and linebacker/defensive end Terrell Suggs. In each case, an agreement was reached before an arbitrator handed down a ruling.

The ultimate deadline hanging over Graham and the Saints is July 15. After that date, franchised players can sign one-year deals only.

That mid-July date served as the impetus for the Saints getting a deal done with their last franchise-tagged superstar, quarterback Drew Brees, in 2012. Owner Tom Benson and general manager Mickey Loomis have speculated that Graham's deal could follow a similar timetable, although both continually express optimism that a deal will be reached.

Graham almost certainly would become the highest-paid tight end in NFL history, surpassing the $9 million per year the New England Patriots gave Rob Gronkowski two years ago. What remains to be seen is whether Graham's salary will approach the $12 million range, putting him in line with a top-five or top-10 receiver.

Information from ESPNNewYork.com's Jane McManus was used in this report.