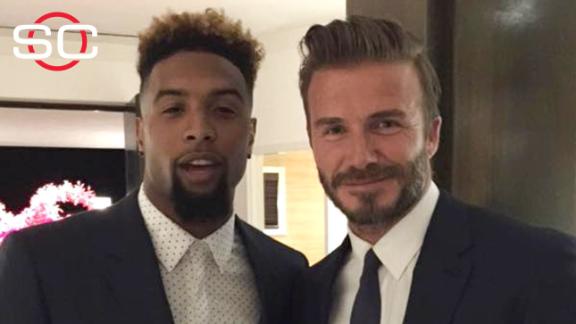 EAST RUTHERFORD, N.J. -- The highlight of New York Giants wide receiver Odell Beckham Jr.'s star-studded celebrity offseason was a recent meeting with international soccer star David Beckham, a hero of his since he was old enough to watch sports.

"He just told me, 'You have to keep the legacy going,'" Odell Beckham joked in a news conference Thursday. "He told me he was watching me throughout the season, catching bits and pieces of it in London or L.A., wherever he's at, but he's been keeping up with me and watching me, and just to keep up the family name."

The two Beckhams are obviously not related. But Odell Beckham, who played much soccer in his childhood, said he's always joked with people that they were because of his admiration for David. After a year in which he exploded onto the scene with an NFL Offensive Rookie of the Year performance, Odell Beckham spent this past offseason as a major celebrity.

"I got to meet one of my childhood idols since I could ever remember, and a guy who I watched probably since I was 4 or 5 years old, David Beckham," Odell Beckham, 22, said. "It was a pretty surreal moment for me, meeting a guy who I've clowned about being a relative of all this time."

On a serious note, Odell Beckham said he was happy to be back with his Giants teammates for the start of offseason workouts this week, and he spoke about the things he needs to do better if he's to build on his 91-catch, 1,305-yard, 12-touchdown rookie-year performance in 2015.

"A lot of the unnecessary stuff, taking the helmet off, anything to draw more attention than what's necessary, that stuff that I definitely need to work on," Beckham said. "It's so hard sometimes, when you're passionate about something, to control your emotions. So I think the biggest thing for me is just controlling my emotions and doing whatever we need to do to win."

Beckham said his coaches have spoken to him about curbing emotional outbursts and celebrations that could draw penalty flags, as a couple of Beckham's did last year.

"You're not going to get every call, and not everything's going to go your way, but that's football," Beckham said. "So just learning how to stay as controlled as possible. It's a tough line not to cross. Sometimes, when you care so much about something, it gets the best of you. So it's just a learning process. I'm still young, very young, and I think it comes with age sometimes.

Beckham was the Giants' first-round pick in the draft less than one calendar year ago. He injured his hamstring in minicamp and then again on the first day of training camp, so he didn't play until Week 5 of the 2014 season. He said he's focused on avoiding a repeat of that and is preparing for 2015 with health in mind.

Beckham has said his hamstring never felt completely healthy last year, even once he got on the field and started making dazzling one-handed catches and knocking down records every week. It remains on his mind.

"You always worry about it," Beckham said. "It's not a good feeling to have, feeling like you can't go full-speed. So it's always in the back of my mind. But I'm definitely a lot healthier this year than I was last year."

Asked what he can do to top last year's debut performance, Beckham smiled and said, "I guess we'll have to wait and see."