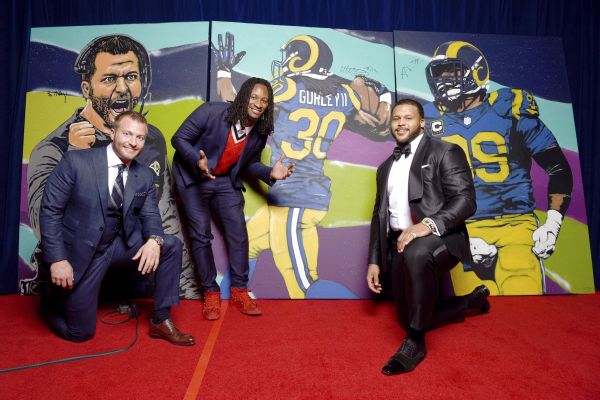 In his first season running a team and as the youngest head coach in NFL history, theLos Angeles Rams' Sean McVay won The Associated Press 2017 NFL Coach of the Year award.

Not to be outdone, his players, Todd Gurley II and Aaron Donald, won the Offensive and Defensive Player of the Year awards, respectively -- capping a remarkable turnaround season for the Rams.

McVay, who turned 32 on Jan. 24, led the Rams to an 11-5 record, a seven-game improvement from the mark they managed the previous season.

"What it means is we had a good season that I think we can build on,'' McVay said. "But you have to earn it every single day. It's a very humbling league.''

McVay ran away with the voting by a nationwide panel of 50 media members who regularly cover the league. He drew 35 votes to 11 for Minnesota's Mike Zimmer. Doug Marrone of Jacksonville received two votes, while the Super Bowl coaches, Philadelphia's Doug Pederson and New England's Bill Belichick, each got one.

Gurley's 1,305 rushing yards, 13 rushing touchdowns and six TD receptions during the Rams' campaign earned him top offensive honors for the year. The third-year running back was the AP's top offensive rookie in 2015, then had a mediocre second season.

Gurley got 37 votes, which put him far ahead of Pittsburgh receiver Antonio Brown, who received eight votes. Patriots quarterback Tom Brady got four and Houston receiver DeAndre Hopkins had one.

"It just tells you the type of players we have on the team. We all help each other out, absolutely. We have some talent, but we're nothing without the whole nine yards and everybody together," Gurley said.

Only two other Rams players have ever won the offensive player award -- Eric Dickerson (one) and Marshall Faulk (three).

Donald, Gurley's teammate, became the first pure defensive tackle to win the NFL Defensive Player of the Year award since 1999

Often the province of outside pass-rushers and backs, Donald broke the trend by earning 23 votes from the 50-member panel.

Warren Sapp of Tampa Bay was the previous tackle to win the award.

"That's one of the best to ever do it, so for my name to be next to that guy's name is beyond a blessing," Donald said. "My dad's been telling me since I was 12 years old working out in my basement trying to work to this point, all the work paid off. You put the body of work in, it's going to pay off for you."

Other tackles to win the award have been Hall of Famers Joe Greene and Cortez Kennedy.

While the Rams' defense didn't rank highly in league stats, Donald was a force. The 2014 top defensive rookie spent 2017 destroying blockers, leading all players at his position with 11 sacks and had 58 pressures while usually being double-teamed.

Donald enters the final year of his rookie contract. He sat out last summer in hopes of getting a new deal and did not return in time for the season opener.

Defensive end Calais Campbell, in his first season with the Jaguars, was second with 17 votes. Arizona's Chandler Jones got five.

The future is bright in the Big Easy as New Orleans Saints running back Alvin Kamara and cornerback Marshon Lattimore won the top rookie awards.

In a year featuring outstanding rookie running backs, Kamara,third-round draft pick out of Tennessee, beat another third-rounder, Kansas City's Kareem Hunt, for the Offensive Rookie of the Year award.

Kamara, selected 19 spots ahead of Hunt, received 28 votes to 21 for Hunt. Houston rookie quarterback Deshaun Watson, despite playing in only seven games before a season-ending knee injury, got the other vote.

"You get caught up in the season, you don't really get time to pat yourself on the back,'' Kamara said. "But when the season is over you realize what you've done. I've kind of had to time to look back and say, I made some history this season.''

Kamara shared duties with veteran Mark Ingram as the Saints won the NFC South with an 11-5 record. He rushed for 728 yards with a 6.1-yard average and scored eight times. He also caught 81 passes for 826 yards, with 5 touchdowns.

No rookie had more impact on his NFL team this season than Lattimore, who won the 2017 NFL Defensive Rookie of the Year.

The 11th overall draft pick and first from his position selected, Lattimore was a shutdown defender for the Saints.

The Ohio State product had five interceptions and 18 passes defensed in 13 games, was a sure tackler and, by midseason, was someone opposing quarterbacks tended to avoid.

He missed three games, one because of a concussion and two with an ankle injury.

Lattimore got 45 votes, far ahead of Buffalo Bills CB Tre'Davious White with four and San Francisco 49ers LB Reuben Foster with one.

The Saints are the first team to sweep the Offensive and Defensive Rookie of the Year awards since the 1967 Lions with Mel Farr and Lem Barney.

Allen missed half of the 2015 season with a kidney issue, then was lost in the 2016 season opener with a torn right ACL.

There were questions about whether Allen would ever play at a high level again. He answered those emphatically this season with the best year of his career. Allen caught 102 passes for 1,393 yards and 6 touchdowns. He was targeted 159 times, nearly 10 per game.

That performance earned him 28 votes. He easily outdistanced Minnesota quarterback Case Keenum, who had eight.

The award recognizes the NFL player who best demonstrates the qualities of outstanding sportsmanship on the playing field, including fair play, respect for opponents and integrity in competition.

The award was founded in 2014 in honor of the late founding owner of the Pittsburgh Steelers and Pro Football Hall of Famer Art Rooney Sr. Kuechly will receive a $25,000 donation from the NFL Foundation to a charity of his choice.

Pat Shurmur heads to his new job as coach of the New York Giants with a prize. For his work as offensive coordinator with the Minnesota Vikings, Shurmur has won the 2017 NFL Assistant Coach of the Year award.

With a backup quarterback, Keenum, and without prized rookie running back Dalvin Cook for most of the year, Shurmur helped Minnesota go 13-3 and win the NFC North with a strong attack.