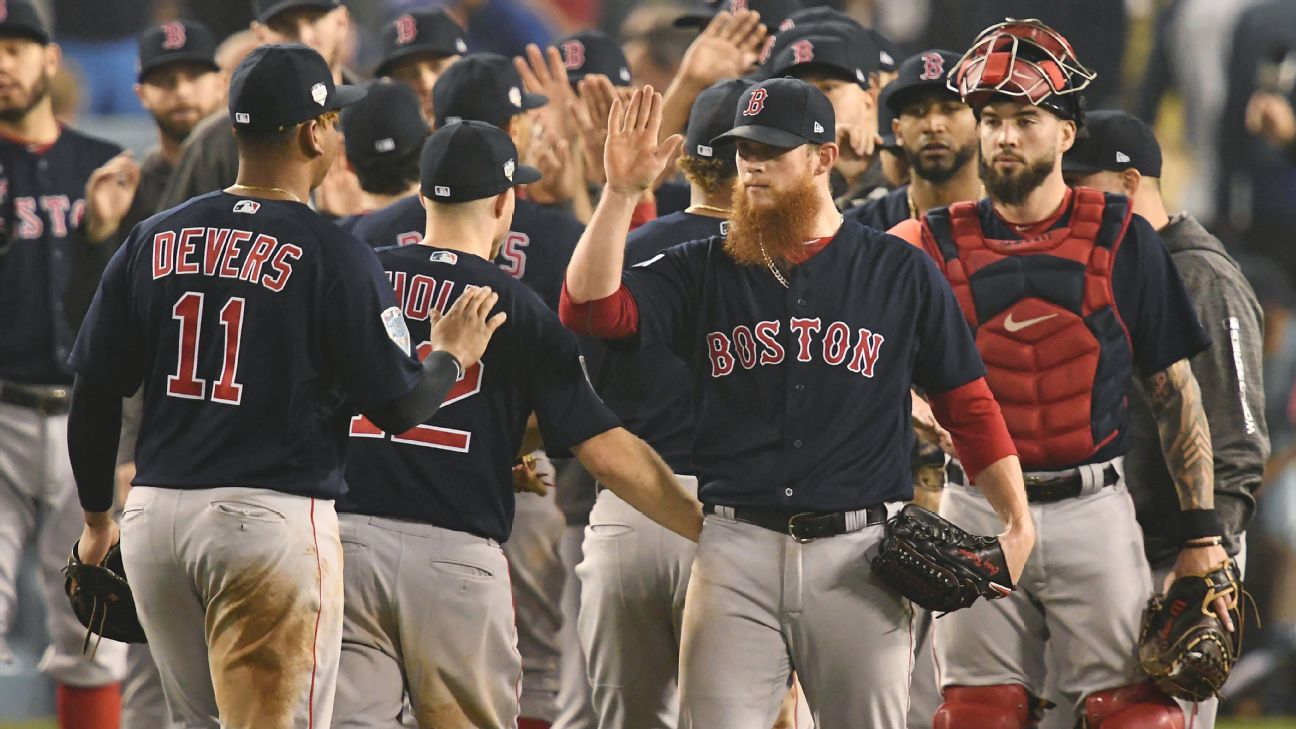 LOS ANGELES -- Did Chris Sale spark the Boston Red Sox with a profane tirade? Did Yasiel Puig do it by flexing his arms? Or, more likely, was this just what the Red Sox have been doing all season?

Whatever it was, a red storm swept through Chavez Ravine on Saturday night and because of it, Boston is one win from its fourth championship since 2004. There wasn't one hero leading the charge, but several, and that's what made Boston's 9-6 win over theDodgersin Game 4 of the World Series a microcosm of seven months' worth of domination.

"That's what makes this team so special," Boston outfielder J.D. Martinez said. "We do such a great job of picking each other up. We always want someone else to do better."

After five and a half tense, well-pitched innings by Boston starter Eduardo Rodriguez and the Dodgers' Rich Hill, the game remained locked in a scoreless tie.

Finally, the Dodgers broke through, with Justin Turner scoring on a Christian Vazquez throwing error, and Puig firing a 439-foot thunderbolt deep into the Los Angeles night. It was a three-run jack and as Puig rounded the bases flexing his considerable muscles, Rodriguez was fuming on the mound, having slammed his glove into the dirt.

"You saw how emotional I was," Rodriguez said. "I've never felt like that before. The whole thing, I was pitching pretty good. To throw a pitch and get beat like that, inside I was really mad. Everybody just came up to me to say, 'Don't worry. We've got your back.'"

The four-run lead seemed insurmountable. Sure, the Red Sox have baseball's best offense. But that scoring machine had been smoking and choking like an Edsel ever since it arrived in L.A. After 18 innings of a 3-2 loss on Friday and Hill's six scoreless innings Saturday, Boston's batsmen had little to show for their trip west.

Also, not for nothing: The Dodgers entered the night 54-0 this season in games they led by four runs or more at any point. Game, set and with the series fixing to be tied, we had a match on our hands. The Red Sox seemed flat, but sometimes perceptions of such a thing are directly tied to the zeroes accumulating on the scoreboard.

Six innings into the game, the traveling horde that accompanies every World Series matchup was pinging travel apps all over Dodger Stadium, vying for whatever flights back to Boston might still be available for Monday.

"Sometimes in October we talk about mechanics and how you feel at the plate and all that," Red Sox manager Alex Cora said. "And sometimes it's will. You will yourself to do great things. And it started very simple."

The game turned to the seventh and a lanky Floridian who is one of only two Boston players who haven't seen a second of live action since the Red Sox arrived at Dodger Stadium threw a fit. It became a thing. The television cameras caught it, replayed it, slowed it down. And why not? It made for some choice mise-en-scene.

That Floridian was of course Sale, and he was pissed. Lined up to pitch Sunday's Game 5 -- or so we thought -- he hadn't pitched in Friday's marathon and, according to Cora, wasn't going to pitch on Saturday, either. So you have a pitcher whose only role in Game 4 was to lead cheers yelling violently at his batsmen, and not just any batsmen -- the most accomplished hitters in baseball this season.

How does that work?

"You don't see it too often," Red Sox pitching coach Dana LeVangie said. "If you guys heard, you would have loved it. He's a genuine guy, a guy who cares about winning and cares about his team."

Well, what happened next is a matter of record. With one out and a runner on first, Dodgers manager Dave Roberts pulled Hill, who had given up only one hit to that point. It's baseball and it's 2018, so of course he pulled Hill. Lefty-hitting Brock Holt was up, so Roberts summoned lefty Scott Alexander to face him. Alexander walked Holt on four pitches.

"I was down in the tunnel I heard someone yelling," Holt said, recalling Sale's furor. "Mookie [Betts] came down, he was going down to watch some video. And I said, 'Who's yelling up there?' He said 'Sale.' Oh, my god, he was mad at us. I think that kind of lit a fire under everybody. We didn't want to see him mad anymore."

After the walk, Roberts was back out, calling for righty Ryan Madson. This has not been a good World Series for Madson, who has pitched in 19 more postseason games than any active player in baseball -- 57 of them. Second on that list is Kenley Jansen, the Dodgers' decorated closer. He gets swept up in that red wave as well.

Anyway, Madson entered the game with an ERA of 0.00 in the series -- the worst 0.00 ERA in the history of the Fall Classic. Pitching in high-leverage spots, Madson had faced nine batters, walked two, given up two hits, uncorked a wild pitch and allowed all five of the runs he had inherited to score.

Madson got Jackie Bradley Jr. on a pop-up for the second out. Unfortunately, when there are two outs and runners on base, this Red Sox team has lit up like a pinball machine the entire month of October. Pinch hitter Mitch Moreland strode to the plate and on the first pitch he saw from Madson -- a changeup -- he rocketed it into the right-field bleachers.

"You've got Ryan, who has a very good track record of getting righties and lefties out, and actually left-handers considerably more, and we just didn't execute," Roberts said. "Moreland hit a change-up first pitch that was up. He made a bad pitch and, unfortunately, Mitch took a really good swing on it."

"To be honest with you, I didn't hear anything," Moreland said. "I think I was downstairs maybe hitting or stretching or getting ready or something because just watching the game, I felt like my spot might be coming up pretty soon or my number might be called. So I was trying to get ready."

OK. So maybe not so much on the Sale narrative. The Dodgers still led 4-3 but already the ground beneath them was beginning to give way. After a scoreless L.A. seventh, Roberts cued up "California Love" on the massive Dodger Stadium sound system and waved in Jansen for the two-out save. Just as he did Friday.

Tupac finished up his celebratory tones and Jansen kicked at the rubber and it still felt like everyone would be safe booking those flights back to Boston. Andrew Benintendi was up first and poked a weak grounder to first. Five outs to go.

Up stepped Steve Pearce, Boston's splashiest in-season acquisition, who OPS'd at a .901 clip in 50 games after coming over for Toronto. Pearce had never faced Jansen before, never experienced that biting cutter. He got one, on the first Jansen pitch he ever saw. And he deposited it into the left-field bleachers to tie the score.

It's a recurring theme this season for Jansen, who gave up a tying homer to Bradley in Game 3 and coughed up 13 long balls during the season -- more than double his previous career high.

"It's just one of those things where you look at the three innings he's thrown, he made a lot of quality pitches," Roberts said. "The two mistakes he made, the cutters didn't cut and he gave up two homers. I don't think it's a mental or physical thing."

Roberts abandoned his six-out plan for Jansen, returning the game to his middle relievers. None of them worked out. Boston got a double from Holt and a tiebreaking pinch-hit single from young Rafael Devers. They loaded the bases, Roberts changed pitchers twice, and Pearce gapped a drive to right-center to clear the bases. He scored on Xander Bogaerts' base hit.

Five runs in the inning from 10 batters against three pitchers. Boom. The Red Sox lead the series 3-1 and can wrap up the championship Sunday. Which, by the way, Sale is no longer scheduled to start. That nod is now going to David Price, though Sale will be lurking in the bullpen, perhaps saving his cheerleading energy for the Boston relief corps.

About this Sale-as-Tony-Robbins business. Maybe there was something to it. Maybe it was a coincidence. Martinez had a feeling the game was going to break anyway, not because of what he saw from his teammates, but because Puig homered. Hey, it's J.D. Martinez. However he sees the world, it's working.

"After the home run, I just came back to the dugout and said, 'Hey, I think that's the spark we needed,'" Martinez said. "Whenever you see something like that where 20-something innings and you're not really scoring any runs, sometimes you just need that spark. It's kind of like basketball, or kind of like the law of averages. At a certain point, it's going to swing back one way."

The bottom line is that the Red Sox scored 5.41 runs per game this season, easily the best figure in the major leagues. The Dodgers are as super-stingy outfit, but Boston has put up runs on everybody. They did to the entire American League during the season, they did it to the Yankees in the ALDS and they did it to the Astros in the ALCS, and Houston was the only team stingier than Los Angeles.

The Red Sox exploded for nine consecutive runs because they are baseball's best offense. Sale might have been growing impatient, but perhaps it was just a matter of time. It had been a long flight west for Boston, across three time zones, and then there was an seven-hour game and all. But the Red Sox's energy reserves weren't depleted -- they were recharging.

"This is the World Series," Martinez said. "Drink a couple of Red Bulls or something, and let's go."

Now, the Red Sox have pushed the Dodgers to the edge. It's the great metaphor of the L.A. season. Time and again, the Los Angeles Dodgers have danced along the edge of a great chasm. Here they are again. After seizing the lead the Dodgers never surrender, the Red Sox are one game from shoving Los Angeles into the void.

"I love my team," Cora said. "I mean, they're very talented. They understand that it takes nine innings or 18 innings and 7 hours and [20] minutes to finish games, but they love to play baseball. They've been doing it since spring training. They've been very consistent throughout. And now we're in this position."

Pearce powers Red Sox with 2 clutch hits in Game 4
Steve Pearce smacks a game-tying homer in the 7th and the widens the lead with a bases clearing double in the 9th.