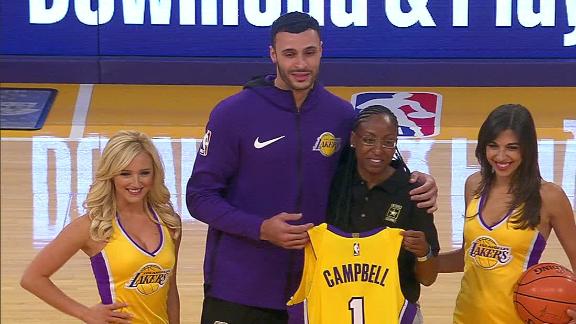 EL SEGUNDO, Calif. -- At the time, Larry Nance Jr. just wanted to reach out to a soldier overseas and ask questions that any 10-year-old would as part of a pen pal program for his third-grade class in Ohio. Nance would find out 14 years later just how much that letter meant to the soldier who received it.

On Wednesday, Nance met Spc. Bianca Campbell in person for the first time after Campbell reached out to him via Twitter in July about how much his letters meant to her while she was stationed in Saudi Arabia in 2003 when she served in the United States Army as an automated logistics specialist.

"I remember the day, I believe it was March 19 that I got the letter," Campbell said at the Lakers' team facility while standing next to Nance. "On my birthday, I lost a friend [in the military] overseas, so when I got his letter, I was at a low place and just connecting with the child in [Nance] gave me a little hope, got my head out of what was going on around me, and uncertainty about what might happen next because at the time, whispers of war were going around."

After the two connected on Twitter, Nance invited her to come see a game. The Lakers, Delta Air Lines and Nance had Campbell and her family in for a visit to the Lakers' practice facility on Wednesday and to honor her at the Lakers-Sixers game later that night. Campbell, who said she wasn't receiving any correspondence from family at that time and was able to exchange two letters with Nance, held on to the letters and came across them a couple of years ago when she wanted to reach out to Nance and let him know how much they meant to her.

She mentioned the letters to the father of her son and how Nance had mentioned that his father played in the NBA. He asked the name of her pen pal and quickly figured out that it was Nance. She reached out to him over Twitter and shared one of the letters he had sent back then:

Is the war almost over? Where is Saddam? How are you? I'm fine. Thank you for writing back. Where are you? Are you good at basketball? I like the Lakers too they are wining there series with the Timberwolves. Who is your favorite player? Mine is Shaq. Who do you want to get LeBron James? I want the Cavs to get LeBron, that is because my dad played for the Cavs. His number is retired in the Gund Arena.

And Again Thank you!!

"Powerful thing. She found me," Nance said. "I remember the exact class project it was. I remember the teacher [Mrs. Staats]. I could tell you the seat I was in in that class. It was really kind of like a summer day. We didn't know who it was going to, we just hoped it could go over and help make someone's time easier. Help make somebody's day better. Just give them something to take their mind off the current situation."

"I was writing about my day [saying] I think LeBron's going here [and] I like the Lakers," Nance recalled. "You know, scatterbrained 10-year-old. ... It's incredible. It's just I think it's so cool that exactly what we wanted to do was just make somebody's time easier or give them a second to pause and think about some kid in Akron, Ohio ... To know it meant so much more to somebody else and now to meet her in person is like really pretty incredible."

Campbell, who liked the Lakers despite growing up in Buffalo, brought her 10-year-old son, Acario Cook, to the Lakers' facility and game. Nance was busy trying to convince Cook to become a Lakers fan.

"We'll convert him," Nance said with a smile. "He was super excited to take a picture with Zo [Lonzo Ball] because all his friends follow him."