Rex Ryan: 'This is my last stop' 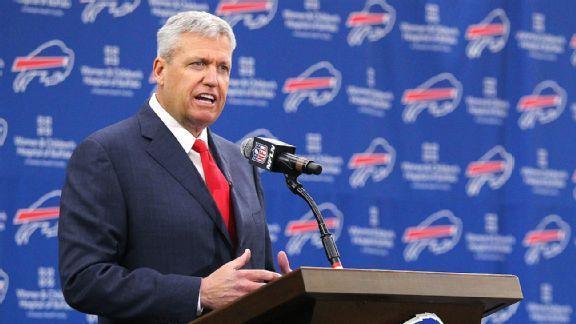 New Buffalo Bills coach Rex Ryan said Thursday that this coaching job will be his last.

"This is it. This is my last stop. This is it for me," Ryan told "Mike & Mike" on ESPN Radio. "The last team I'll ever coach will be the Buffalo Bills, and I hope it's 15 years from now."

The 52-year-old Ryan, who was fired after a six-year stint with the New York Jets, was officially introduced Wednesday by the Bills and promised to be his genuine self.

"I think I've got to put everything in. Just like [Buffalo fans] put everything in, I'm putting every single thing that I have into coaching this football team. That's it for me. This'll be my last shot. I don't care if I'm young, whatever. It makes no difference. Every ounce of my energy will be to build this team. And the great thing is, it's not like I'm building this by myself. I've got some great people around me with the same direction, and that's why I'm so confident."

Ryan, who went 46-50 with the Jets, replaces Doug Marrone and will be Buffalo's eighth head coach in the past 18 years. He will report directly to owner Terry Pegula.

"This guy right here tells his Realtor, 'Where does the most snow fall in the area? I want to live there,'" Pegula said Wednesday. "I mean, how Buffalo is that?"

In a one-on-one interview with ESPN's Michele Steele, Ryan confirmed that's what he said.

"Absolutely. That's a true statement," Ryan said Wednesday. "[Are we going to see you on a snowmobile at some point?] Yeah, I don't know how effective I'm gonna be at that or whatever, but yeah, that's it. I want to be ... this is the community we live in, and we're gonna embrace that. Yeah, wherever that snow dumps the most, that's where I want to live."

The defensive-minded Ryan will inherit a Buffalo defense that finished fourth in the NFL in yards allowed, recorded a league-leading 54 sacks and produced three Pro Bowl linemen this season. On offense, the Bills' offense averaged 4.92 yards per play over the past two seasons -- the third-worst mark in the league.

"We've got to be dialed in on who we are, who we want to be," Ryan said Thursday.

"I'm trying to put together an all-star staff that's not about individuals but about the team," Ryan said Thursday.

The Jets finished sixth this season in total defense (327.2 yards per game) and fifth in fewest rushing yards allowed per game (93.1) under Thurman's watch.

All were on Ryan's coaching staff with the Jets.

"The players [with the Jets] are the reason that I got this job, and I'll always be indebted to them," Ryan said. "I've made friends in that organization that will last me a lifetime. This is my new start. This is where it's going to be. I'm not looking back; I'm looking forward."

When asked about the number of first-time head coaches who are being hired around the league -- including with the Jets, his former employer and current division rival -- Ryan's response was typical Rex.

"I wish them the best," he said, "except Todd Bowles with the Jets."

Mike Rodak of ESPN.com and The Associated Press contributed to this report.

Ryan Confident Bills Will Make Playoffs
Bills coach Rex Ryan is confident he will get the job done in Buffalo and addresses the quarterback situation.